Cuba pulls out its Russia card against Biden in the Americas!

Cuba is often pitched as Russia’s gateway to the Americas and recently, Cuba is locking horns with the USA on several issues. Over the last few months, Cuba is leaving no stone unturned to chastise and humiliate the Biden administration in the Americas 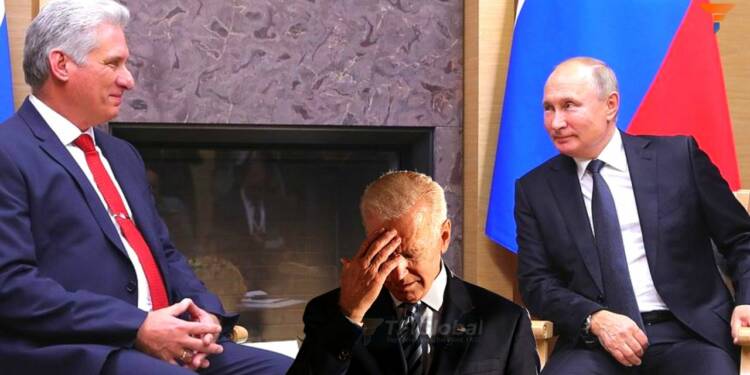 On 29th December 2022, President of Cuba Miguel Diaz-Canel and President of Russia Vladimir Putin spoke on telephone to discuss issues of bilateral collaboration in energy and industrial development.

In a tweet, the Cuban Diaz-Canel confirmed their meeting stressing, “I had a fraternal telephone exchange with President Vladimir Putin. We reviewed the excellent results of our recent visit to Russia and ratified the common will to deepen political dialogue and economic, commercial, financial, and cooperation ties.”

After the conversation, both statesmen confirmed their willingness to implement the agreements reached during Diaz-Canel’s visit to Moscow in November.

Prior to this, Russian authorities had also announced that they will allocate over US$11 million to buy 25,000 tons of wheat that will be donated to the Cuban people. This gesture of friendship was warmly greeted by the Cubans.

The call for energy assistance

Reportedly, Cuba has also asked for assistance in fixing the electricity shortages which have recently left thousands of Cubans in limbo. At present, it is anticipated that Cuba will be suffering blackouts in seven percent of its territory.

For this, Cuba has reportedly asked the Kremlin for ships to produce electricity, to try to keep Havana supplied with electricity, because the towns and cities in the interior are in a total crisis due to lack of electricity.

Russia and Cuba also have a plan for mutual cooperation until 2030, a large number of joint projects to be carried out, and the opportunity to analyze what has been done and what needs to be done in the current complex conditions.

Read More: The Cuban government is too naive to understand Biden’s wicked motives

Show off the military strength

Additionally, Cuba demonstrated to the world its military power together with Russia and China in a pretty striking manner. The Ural-4320 is a Russian-made military SUV that has already been delivered to the island, and the Cuban Armed Forces showcased two of them despite their famous secrecy.

The images of two troop-transport Urals, crowded with young soldiers — or ’pioneers’ [students] in flags, in some towns — and published by the official press, did not go unnoticed by fans and weapons specialists.

The Ural-4320 went “for a walk” during the so-called Caravan of Liberty, which was a symbolic recreation of Fidel Castro’s journey to Havana in January 1959 and was, according to some historians, a “theatrical” delay intended to heighten the impact of his arrival in the nation’s capital.

So, Why did Cuba suddenly become so close with Russia again despite the fact that for the last 11 months, Russia and Cuba, both are crippling in their own cobbled web of crisis?

The answer is the USA.

Cuba is often pitched as Russia’s gateway to the Americas and recently, Cuba is locking horns with the USA on several issues. Over the last few months, Cuba is leaving no stone unturned to chastise and humiliate the Biden administration in the Americas.

Recently, Cuba decided to get into bilateral cooperation with Honduras. Giving a major blow to the US, Honduras hired Cuba’s services to ‘rebuild’ its education system. Whereas, Cuba also chastised the US along with other Caribbean nations in the CARICOM summit.

Cuba is on a rampage and has big aspirations to become the big brother of Southern America. And so, Cuba has started to sting the US. Just to demonstrate that the nation might not hesitate to step up its game against the USA, there has been a sudden display of military power and relations with Russia.

This is comparable to two friends who share the same ideology and worldview banding together to fight a common foe. It’s the same with Cuba’s Russia card against Biden in the Americas.

For peace to prevail, Rwanda needs to accept its support to M23