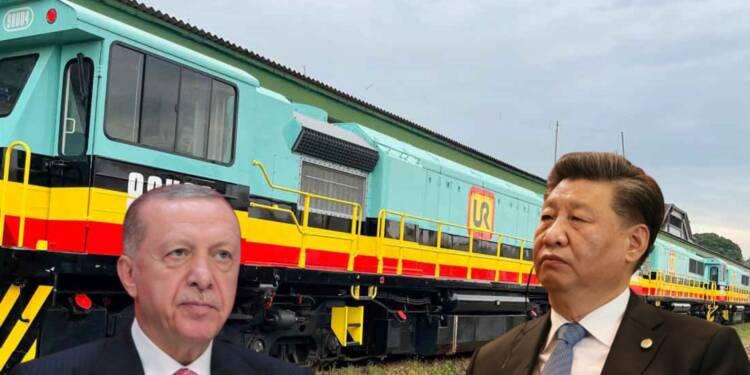 The power play and the competition for maintaining influence in Africa between US, EU, Russia, and China is well-known. After the Russia-Ukraine war, the geopolitical importance of Africa has grown significantly and major powers have started a scramble for Africa. At such a time, another player, Turkey, has also been trying to gain more ground and making inroads in Africa. Often it has also found itself antagonizing China and recently has become its major geopolitical rival in the continent. A recent development also suggest that Turkey has been able to taste some success in its geopolitical mission in Africa while successfully cornering China.

Uganda has terminated its contract with Chinese firm China Harbor and Engineering Company Ltd (CHEC) to build a railway to the Kenyan border and is now considering a deal with a Turkish company, as per a report.

In 2015, the east-African country signed an engineering, procurement, and, construction contract with CHEC to develop the Standard Gauge Railway (SGR) project, which will use the international standard rather than a narrower gauge sometimes used in the region.

The 273-kilometer railway line, estimated to cost $2.2 billion, would link the capital Kampala and Uganda’s border with Kenya, where it is planned to link up with Kenya’s own standard gauge rail that runs to the Indian Ocean seaport of Mombasa.

As per the report, Uganda is frustrated with China’s unwillingness to provide funding for the project and is now courting Turkey’s Yapi Merkezi to take up the job, a senior official in the ministry of works and transport project has told Reuters.

“One of the obligations under the contract with the Chinese was that they were supposed to help Uganda source financing which has really not come true,” the official said. He further said Uganda had written to the Chinese firm in December canceling the contract and that the Chinese had so far not indicated any objection to the decision. Thus, as per the report, Uganda has now turned to a Turkish firm.

The Turkish firm has confirmed to Reuters it had entered into a memorandum of understanding with the Ugandan government but that a final agreement has not been signed yet.

The Turkish firm Yapi Merkezi is helping to build a 1,219-kilometer standard gauge railway line in Tanzania, which it is developing as part of efforts to boost trade with Uganda and other neighboring countries.

Turkey vs China in Africa

Turkey and China happened to be best of friends at the time however, things have changed and now the two have become each other’s geopolitical rivals in Africa. Things turned sour between the two, ever since Turkey began to express concern over the human rights violations issue of Uyghur Muslims in China-administered Xinjiang.

Read More: Best friends forever China and Turkey are close to begin fighting each other

Turkey has been trying to engage with Africa and gain more ground on the continent. However, Turkey’s political, diplomatic, or military engagements do not align with the interests of China. Earlier Turkey has also sought to build defense cooperation with Africa. This clash between China and Turkey for gaining ground in Africa is now proven by the recent development in Uganda.

Read more: Erdoğan and Xi Jinping are on a collision course in Africa

Thus, with this, Uganda has taken away the project from China and handed it over to Turkey. This is a significant blow to China which has already been trying to counter an emboldened US influence in Africa.

Earlier, Kenya’s appeals court had rejected China’s multi-billion dollar BRI rail project. The court had declared that the contract between the Kenyan government and China Road Bridge Corporation was “illegal”.

Today, in the era of geopolitical re-alignments and changing world order, Africa is gaining more and more importance and advantage which it utilizes to safeguard its national interest. Gone are the days, when Africa had to depend only on Western aid and assistance. After this China also emerged as one of the biggest aid donors to Africa. However, today Africa has increasingly become aware of Chinese neo-colonial intentions and debt-trap diplomacy. The continent is today looking to diversify its engagements with different powers and forging new ties for its own economic development which will benefit Africa in the long run.