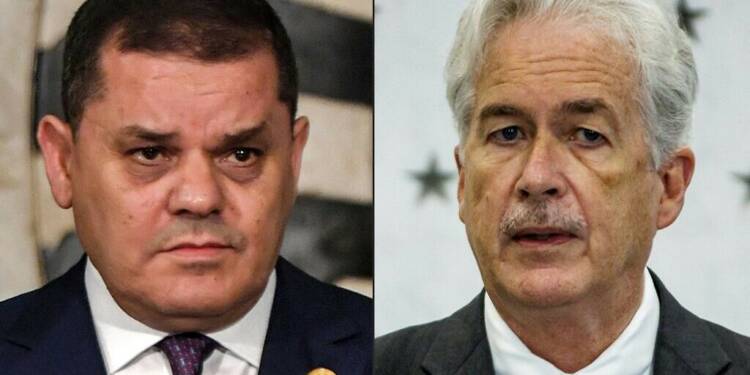 (COMBO) This combination of pictures created on January 12, 2023 shows (L to R) Libya's Tripoli-based Prime Minister Abdulhamid Dbeibah speaking in Tunisia's capital Tunis on November 30, 2022; and CIA director William Burns speaking before introducing the US President during a visit to the agency headquarters on the 75th anniversary of its founding in Langley, Virginia, on July 8, 2022. - CIA chief William Burns has met Libya's interim premier in Tripoli weeks after the authorities handed the United States a suspect in the 1988 Lockerbie bombing, the Tripoli-based government said on January 12. The meeting, also reported by Libyan media, was the first visit by a CIA director to the North African country since the 2012 attack against a US mission in Benghazi that killed the US ambassador and three other Americans. (Photo by FETHI BELAID and Samuel Corum / AFP)

CIA chief Libya visit: The US credibility in Africa is declining and it is fast losing its long-held control over one country after another in the continent. This has also coincided with Russia’s growing influence in Africa which is making Biden very worried of late. The US losing another country to Russia could just be an inevitable possibility and Biden seems to have finally turned to the US Central Intelligence Agency (CIA)  to somehow stop this.

CIA chief has made rare visit to Libya

After everything that has happened in Libya and after the Libyan National Army (LNA) of commander Khalifa Haftar announced “a final chance” to draw up a road map for elections, the CIA chief has made a rare visit to Libya, as per a report. During the trip the CIA chief also met Prime Minister Abdul Hamid al-Dbeibeh in Tripoli, the Libyan government has said.

Libya has not had any peace since a NATO-backed uprising in 2011, which split the country in 2014 between warring eastern and western factions. The one in the east is backed by Field Marshal Khalifa Haftar, and an administration based in Tripoli is headed by Abdul Hamid Dbeibeh. The regime headed by Dbeibeh is backed by the West whereas Haftar is supported by Russia. The Eastern leader Haftar had also waged a war on factions in the west after 2014, including a 14-month offensive to capture Tripoli, although it was unsuccessful. Dbeibeh’s government was installed through a U.N.-backed process in 2021 as part of a peace plan, but his administration is no longer recognized by the main political factions in the east and many Libyans fear a new bout of warfare.

United States vs Russia in Libya

The US is worried about Russia’s presence in Libya and is already facing an unprecedented credibility crisis in the geopolitically important African continent. If the eastern leader Haftar comes to power in Libya, it would be a huge loss of face and yet another geopolitical debacle for the US in Africa. As we have mentioned Haftar is backed by Russia and Moscow had also backed Haftar’s forces during the war in 2019-2020, with the Russian private military contractor Wagner deploying up to 1,200 troops in Libya, according to a 2020 report by the U.N. experts. The United States has previously said it is worried about the role played by Russia in Libya’s conflict.

US on the backfoot

Further, if we look at the current scenario in the country it becomes clear that Russia has an upper hand. In addition, there were reports that Gaddafi’s son Seif-al-Islam, will run for Libya President. He even announced that he wanted to restore the lost unity of Libya after a decade of chaos. Seif-al-Islam enjoys popular support in the country and enjoys a good reputation despite the West’s attempts at maligning his image, which has unleashed the International Criminal Court (ICC) against him. Gaddafi’s son is also backed by the Haftar regime which is supported by Russia. This doesn’t bode well for the West’s intentions to control Libya.

The West had in the past made many calls for holding elections in the country which went in vain. However, recently the Libyan National Army (LNA) of commander Khalifa Haftar announced “a final chance” to draw up a road map for elections and showed the West who holds the real power in Libya. Thereby pushing the US on the back foot.

Again, the US is also seeking more Libyan suspects in the 1988 bombing of a Pan-Am airliner over Lockerbie in Scotland. To this, the US announced that another Libyan suspect, Mohammed Abouagela Masud, was in its custody. Masud was taken from his Tripoli home by armed men on 17 November, held for two weeks by a militia, and then handed over to US government agents in the port city of Misrata. However, the detention and his transfer to the United States prompted outrage inside Libya, which has no extradition treaty with Washington. Dbeibeh, Libya’s interim Prime Minister faced harsh criticism from political opponents, human rights groups, and relatives of Libyan captives.

Thus, the prospect of an election to be held in the months to come and growing support for Haftar has alarmed Dbeibeh and the West. To add further, this is precisely why the Libyan government stopped Senussi’s extradition too. Senussi is Gaddafi’s brother-in-law and former intelligence officer, who is accused of carrying out a series of fatal bomb blasts against western aviation and other targets.

In this context, there’s little hope that an election could be held and the CIA’s visit just before that shows a desperate attempt by the US to somehow exert its influence and try to maintain its control over the Libyan government. If an election is held it is almost certain that Haftar’s faction may take the lead and gain control of Libya. However, the US would never want to let this happen as it would force it to wash its hands off Libya once and for all.