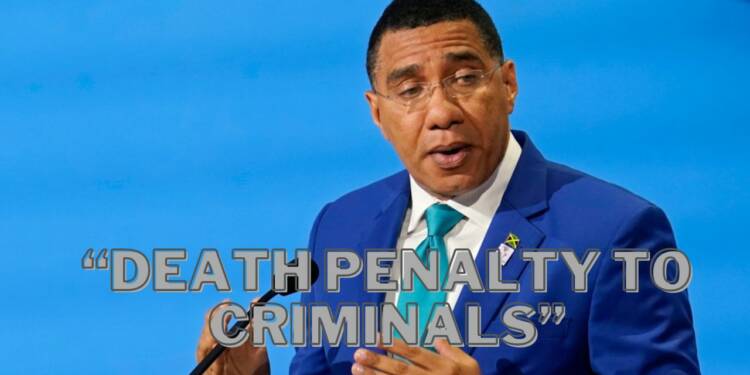 On 15th Janaury, Jamaica’s prime minister, Andrew Holness, stated that his government is going to finalise proposals to make the death penalty as the punishment for capital murder and 45 years imprisonment the minimum sentence for other homicides.

Emphasising that his regime will be swiftly implementing the measures, Andrew Holness noted in articulate words that for capital murder, the penalty is death, if not then life imprisonment without parole. Andrew Holness said that for years, criminals in Jamaica have taken the law lightly, believing that the punishment for homicide is not life imprisonment and that with a good lawyer, they will be released swiftly.

He stressed, “Our penalty remains, if you take a life, and you are convicted of such, your useful life should be taken. So while there are many issues around the death penalty and how it is used, there should be no issue around the incarceration of somebody who deliberately, willfully, repeatedly takes life.”

This development is astonishing since Andrew Holness is the same leader who is infamous for suggesting irrational measures to resolve one of the greatest public menaces in Jamaica i.e. crime.

As recently, in response to the skyrocketing homicides and gun violence in the Caribbean nation, Holness’s administration promulgated a state of emergency in six of the fourteen parishes. This led to an outright catastrophe as during an emergency, the police and security agencies in Jamaica unlawfully arrested and detained innocent people. In several cases, cops also entered the properties of people without any warrant.

However, according to Holness, the emergency was necessary. Despite widespread evidence of police brutality, Andrew Holness vowed to keep resorting to a State of Emergency.

Similarly, in the backdrop of the murder of a minister of religion, who was also a well-respected figure in the community, the prime minister suggested one of the most absurd reasons for the rampant crime in Jamaica. Rather than announcing effective measures to bolster the security of Jamaica, he told a gathering that crimes like murders can be eliminated by changing the “social and religious mores and the culture of society”.

Although the government has announced that it will be making radical changes in the legal system of the country, it is difficult to rely on Holness’s word. His persistent neglect to abolish the constitutional monarchy status demonstrates this.

Despite telling Britain’s Prince William and his wife Kate that Jamaica will become independent, Andrew Holness has not taken any step in that direction. On the contrary, his minister legal and constitutional affairs minister, Marlene Malahoo Forte, blamed the opposition for Jamaica not being able to become a democracy.

Read more: Jamaica has the become safest country in the Caribbeans (only on papers)

Therefore, Holness’s pledge that he will reform the failing justice system of Jamaica is an attempt to increase the vote bank. These big statements that the death penalty will be introduced are just another ploy of Andrew Holness to drown Jamaicans in his continuous pool of deceit and falsehoods. A good leader is one who apart from making promises also fulfils them. At the end of the day, a politician’s performance is going to be evaluated based on his governance. As Andrew Holness’s record is infamous for failure and deception, the chances of him coming back to power are extremely few.

The need of the hour in a nation like Jamaica where homicides have become routine is to enact meaningful laws, increase the funding of the police, implement stricter provisions, introducing minimum sentences etc. An emotional speech is not going to drive out crime which has snatched countless lives, it is constructive action.