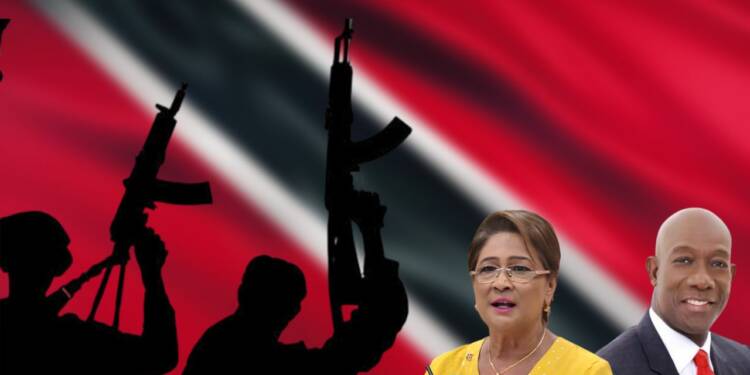 2022 has left Trinidad and Tobago in a chaotic state. For the first time in the nation’s history, there were more than 600 homicides recorded in a calendar year, making 2022 the country’s deadliest year ever.

The escalating violence amongst criminal gangs in Trinidad and Tobago is believed to be the root of the country’s rising homicide rate. To combat these deadly activities, Fitzgerald Hinds, the Minister of the National Security introduced ‘Project Grace’ in a bid to provide technical assistance to the police system. However, it is unclear how soon initiatives like these might have any real impact.

Amidst this, Prime Minister Keith Rowley has come under fire from Kamla Persad Bissessar, the leader of the opposition and a former prime minister, for inciting such unrest in the country. However, Bissessar’s rage has been directed more at Fitzgerald Hinds, one of Rowley’s favorites.

According to a media report by Loop news, the Opposition Leader Kamla Persad-Bissessar has again called on Prime Minister Dr. Keith Rowley to fire National Security Minister Fitzgerald Hinds. In a statement on Saturday, Kamla Persad-Bissessar noted that 22 people have already been murdered 14 days into 2023. She said: “Since Keith Rowley ridiculously appointed Fitzgerald Hinds to the helm the Ministry of National Security, an alarming 960 people have been murdered. In addition, violent assaults, wounding, robberies, carjacking, rapes, and home invasions have also exploded.”

Kamla Persad-Bissessar further charged that the Rowley administration had failed to come up with a practical, data-driven strategy to combat violent crime and rebuild public trust.

Kamla Bissessar has stressed that ever since Keith Rowley appointed Fitzgerald Hinds as the National Security Minister, the security of Trinidad & Tobago has worsened. She has demanded that the govt. should instead prepare a proper anti-crime plan for 2023. Well, Mrs. Kamla Bissessar has been a fierce critic of Keith Rowley’s leadership and insists vehemently that Keith Rowley’s favoritism is the reason Hinds has control over national security.

The Rowley Administration has consistently disregarded the Opposition UNC’s numerous presentations of a comprehensive strategy for combating crime both inside and outside of Parliament.

Additionally, it is a fact that under the UNC administrations of Basdeo Panday and Kamla Persad-Bissessar, murder and other serious crimes decreased significantly. This decline can be attributed to their ability to effectively combat crime through the personnels they selected and the policies they implemented. But, ever since Rowley and Hinds took the reins of Trinidad and Tobago, the situation has just worsened.

Read More: Phillip J. Pierre is on a ‘witch hunt’ against his political rivals. Cute!

The favoritism of Rowley

Fitzgerald Hinds is still serving as the Minister of National Security, and Rowley does not want to replace him with a candidate who is more qualified. And guess what that has led to under Hinds’ leadership? The murder rate in TT has skyrocketed.

Experts, the public, and the media have frequently expressed concern about Hinds’ work ethic. Nevertheless, Hinds isn’t bothered anymore because Rowley is on his side.

In public, Hinds has often given statements like, “It would be a ‘little’ nice if I had the full support of everyone in the fight against crime.” This was An indirect dig at Kamla Bissessar and her critics. He also shifts blames on the lack of accessibility of firearms and the support of citizens, but not his inability to do the job which has worsened the crisis of TT.

Let us give a minute example to show how incapable his leadership is. In early November, a shocking video of terrified students of Rose Hill Roman Catholic Primary School ducking for cover from nearby gunfire went viral. The footage traumatized the students, parents, and the public, with people demanding immediate action be taken to protect the children.

Yet, in response to the viral video, Hinds said, in part, via a Facebook post, “The video of the children of the Rose Hill RC School, in Laventille, laying themselves onto the ground, at the sound of automatic gunfire; and in which the voice of the teacher telling them “shhhhhh”, signaling that they keep quiet; was quite misleading. You could be forgiven for thinking that the gunmen were actually on the compound. They were not!” He further claimed that in fact, the actual shooting took place about 200 m away, “This video, which went viral, came to my attention only yesterday. The event occurred on Monday,”

According to Hinds’ math’s, 980,000 people in T&T do not support him or the crime fight, and 280,000 citizens are criminals. So, even by his own admission, he does not have the public’s confidence, yet, he continues to have the Prime Minister Rowley’s support.

Hinds is ready to blame everyone for the nation’s downfall. Without a doubt, Hinds has failed Trinidad and Tobago. Rowley, however, is not yet prepared to fire the main offender for the crisis. This is a disaster, a Catastrophe! Now, this is peak favoritism. This act of peak favoritism is rotting the TT’s national security to the core.