by Rohit Yadav
in The Caribbean
Reading Time: 4 mins read
0 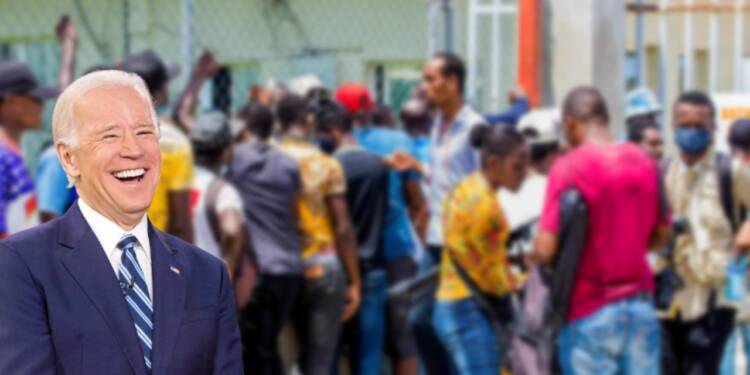 One of the largest migrations of people from the Western Hemisphere originates in Haiti. Haitians have since long immigrated to safer lands to escape the collapsing system back at home.

The US’ President, Joe Biden introduced a ‘parole program’ to ease this crisis, by allowing Haitians into the country. Though, Biden and Democratic Party, which has since gained acclamation for relaxing migration policies, isn’t actually worthy of it. Biden’s new change in foreign policy regarding the parole program is a travesty for both Haitians and Americans.

Haiti has always been at a disadvantage owing to its geographical location. The country has seen tragedies like earthquake and hurricanes over the years. Tens of thousands of Haitians were displaced by Hurricane Matthew in 2016 in addition to the enormous number of people who perished or lost their houses in the 2010 earthquake.

Numerous other factors have contributed to the exodus from Haiti, including political and human rights abuses that go back to the Duvalier dictatorships of the 20th century. Gangs and state-sanctioned violence, further add to the insecurity. In addition, given that Haiti has the lowest gross domestic product (GDP) per capita in the Western hemisphere, Haitians also move for better economic opportunities.

Large Haitian Diasporas abroad are another attraction for people looking to emigrate. To put things in perspective, Haiti has a population of 11 million and a diaspora of 2 million.

Basically, everyone in Haiti wants to leave.

Read More: Haiti: The Troubled Nation of the Caribbean

Of the 2 million Haitian diaspora, 1.1 million live in United States. It has been a prime destination for Haitian population looking to emigrate. In the first week of January, Joe Biden announced a new parole program for Cubans, Haitians, and Nicaraguans combined.

Details regarding the program were made public by the United States Citizenship and Immigration Services recently. The scheme, which was originally meant for Venezuelans, will let up to 30,000 citizens in total from the four nations enter the country each month and live and work there for up to two years.

The program is open to Haitian nationals living in Haiti or a third country who do not hold citizenship, residency, or refugee status in a third country. Haitians will require a sponsor in the US who is willing to pay for the accommodation, health care, and other fees during their stay.

Following the introduction of the parole process, thousands of Haitians flocked to the nation’s migration office in an unheard-of enthusiasm to apply for passports. Mosenie Toussaint, owner of Mose Multi-Services said, “”Right now, it’s really difficult to buy passport stamps at the DGI [Direction Générale des Impôts] and accompany a client to the immigration service.” He further continued, “Today, people are sleeping in front of immigration [office], since many of them are coming from the provinces.”

Chaotic situation this morning in front of the Office of Migration on Lalue in #Haiti's capital. Haitians are clamoring for an application for Biden's aptly named 'parole process' as they seek to escape the prison Haiti has become as a result of destructive US foreign policy. pic.twitter.com/xbBmLqWw8J

Since the United States began accepting Haitian applications for its parole procedure, the cost of a Haitian passport has doubled in just ten days. The price has reportedly increased from roughly 15,000 to 30,000 gourdes, or from $100 to $200, according to applicants and company owners. The increase in price shows malice on the part of Haitian President Ariel Henry, who is capitalizing on the people’s misery. Haiti at the moment ranks 168th on the ‘Least corrupt nations’ list.

Further, Biden is trying to portray the image of “being welcoming” through the parole program. However, it’s not long when in 2021, more than 14,000 helpless Haitian migrants were literally whipped away by the Border Patrol guards.

Haitian President Ariel Henry instead, used the migrant deportations to push the elections further. Only 15% of people voted in the last elections, clearly showing the eroding hope and trust in Haitian democracy.

There are several problems for Haiti in the parole program. Firstly, it is only meant for four countries and amounts to just 30,000 immigrant intake into US. Also, US has blindly preferred Cuban migrants over others. Thus, it remains to be seen how much chances the Haitians would get at their future if, the discriminatory migration policies continue.

Secondly, the parole program puts a question on what would happen to the Haitians when two years of the parole end. United Nations refugee agency has deplored the parole program and termed it as “risk to fundamental rights.” Moreover, what happens to those who’re not eligible for the program or don’t have any sponsor in US?

Most importantly, US should ensure that Haitian oligarchs and criminals aren’t the beneficiary of the parole program. It’s long since; some Haitian miscreants have created mess in United States who have always made through US instead of the deserving applicants. Thus, corrupt system forces the needy to enter United States through illegal means.

NEW: Biden admin announces it will begin expelling Cubans, Nicaraguans, & Haitians who cross into US illegally between ports of entry, but will also admit 30,000 preapproved migrants per month into the US from these countries via mass parole, allowing them to work in US 2 years.

Biden who hails from Democratic Party, which stands for liberalization and immigration, has extended Trump’s anti-immigration policies through this parole. The American President has several questions to answer and amendments to make. Otherwise, the parole program will not only be a replication of Trump’s policies but also exacerbate migrant crisis.