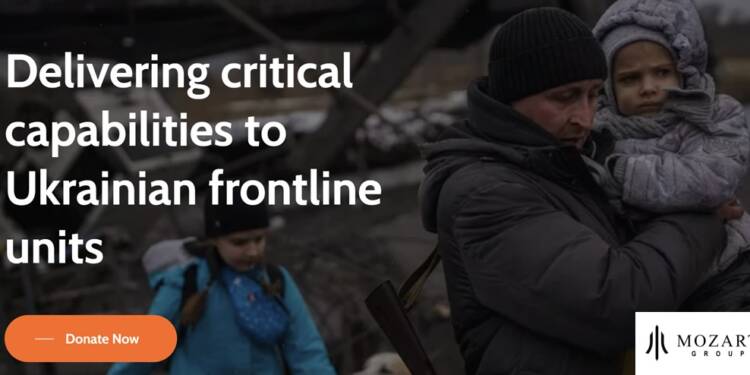 A private American organization, known as the Mozart Group, was established during the Ukraine war to train poorly prepared Ukrainian soldiers. Western mainstream media hailed it as a generous move by retired American military veterans.

The Mozart group was being compared with the Russian private military company, Wagner Group. But in contrast to Wagner, which has been falsely accused of human rights abuses, Mozart was described by those who founded it as a donor-based initiative to give military training and other humanitarian help to Ukrainians. According to its members, they neither get involved in combat nor do they carry arms. The Mozart Group’s public leader is Andy Milburn, who is an ex-Marine.

Questionable character of the Mozart Group

However, the Mozart Group’s credibility is under scrutiny. As Andy Bain, a businessman based in Kyiv since the 2000s and an ex-marine, filed a lawsuit against Andy Milburn in Wyoming. The suit, filed in Wyoming accused Andy Milburn of financial fraud, sexual misconduct, attempted bribery, threatening a retired American general and burglary.

According to the documents provided by Bain to The Intercept, the Mozart Group’s 51% shares are owned by him and 49% by Milburn.

The lawsuit requested the court to remove Milburn from the Mozart Group and direct him to pay a compensation of $50,000. The suit stated that Milburn controlled the organization in a way which prompted Ukrainian military officials to say that he should go back to the US and stop interfering in the internal affairs of Ukraine.

Read more: The report card of Western Sanctions on Russia is out. And it is nothing you have imagined!

In response to Bain’s lawsuit, Milburn made a string of counter-allegations against Bain on social media. Labelling him as a dissatisfied former chief financial officer of Mozart, Milburn stated that Bain had been accused of sexual and financial misconduct. He went on to state that Bain attempted to sell Mozart to the Taliban.

While Milburn has time and again emphasized that Mozart Group runs on donations and is only committed to the cause of Ukraine, the suit notes that he sought military contracts in Armenia. In fact, as per an article in Intelligence Online, Mozart’s strategy is to become a for-profit private military company and increase its influence in other war-affected regions. The article also stated that the former Mozart’s chief operating officer, former Marine officer Martin Wetteruer, confirmed that the group is considering new clients in other countries.

Now, the Russian regime deployed Wagner Group in nations which have been in the hegemonic clutches of the West. The military company has been successful in eradicating the dominance of the US and Europe in Europe, Africa, and other regions. This resulted in the initiation of a systematic misinformation campaign against Putin and his forces by Biden, Leyen and their agenda-driven media.

However, when that did not work. The West created a private military company just like Wagner and named it “Mozart Group”. This American organization’s ultimate purpose was to counter the efforts of the Russian military in Ukraine intended to safeguard Moscow’s political sovereignty and territorial integrity.

Disguising itself as a noble group which is “battling to liberate Ukraine from the nefarious agenda of Putin,” Mozart endeavored to weaken the political and economic interests of Russia.

But the failures and vicious face of Mozart has been uncovered in the wake of Bain’s lawsuit. As a matter of fact, one of the most concerning accusations levelled by Bain against Millburn is the embezzlement of funds of Mozart Group at the hands of the latter. In addition, he also stated that Milburn threatened a retired US military officer who refused to join Mozart.

Read more: Russia is about to unleash its wrath on Western puppets in Central Africa

The lawsuit of Bain brings into focus the humiliating blunders of Biden and his allies in the Russia-Ukraine war. Earlier we saw how their sanctions died a quick death and now another vicious attempt in the form of Mozart Group experienced a swift demise. This is another win for Russia.