‘A Chinese stooge and bad news for India,’ Biden’s UN ambassador pick is trouble for India at the UNSC 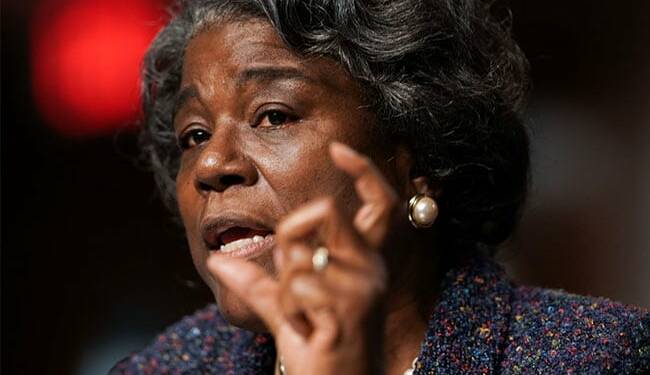 Biden’s biggest foreign policy challenge without a doubt will be China and Biden’s pick for US ambassador to the UN surely would’ve raised eyebrows in New Delhi. Linda Thomas Greenfield, US’s ambassador to the UN has a history of pro-China statements some of which were delivered at a Chinese Communist Party-funded Confucius Institute. Her latest remark on India’s bid for a permanent seat at the UNSC did not do much to quell fears.

Joe Biden’s policies and his picks for his administration, has not soothed any nerves. From letting China get away without any repercussions when it sanctioned the officials of the previous administration. Neither did Biden take steps when China intruded Taiwanese airspace with a large number of bombers and fighter jets twice in two days. Now Biden’s pick for US ambassador to the UN is a shot in the face to every US ally who stood with Trump, especially for India.

U.S. President Joe Biden’s appointment of UN Ambassador Linda Thomas-Greenfield on Wednesday did not expressly commit to endorsing India’s new administration as a permanent member of the UN Security Council.

Three previous administrations, George W Bush, Barack Obama and Donald Trump, had publicly announced that India’s bid to be a permanent member of the UN Security Council was endorsed by the United States.

During her confirmation hearing for the position of the US Ambassador to the UN, Senator Jeff Merkley from Oregon asked her, “Do you think India, Germany, Japan, should be (permanent) members (of the UN Security Council),”

Thomas-Greenfield, who spent more than 35 years in Foreign Service before being nominated, told legislators that this was an ongoing issue. “I think there have been some discussions about them being members of the Security Council and there are some strong arguments for that,” she said.

“But I also know that there are others who disagree with their regions that they should be the representative of their region. That, too, is an ongoing discussion,” she said in an apparent reference to the Coffee Club or United for Consensus.

Thomas-Greenfield, in response to another question, favoured reforms in the UN Security Council. She said “I think there is general agreement across the board that reforms are needed in the Security Council. What those reforms will be and how they will be implemented, I think remains to be decided but you know changing the number of members that happened we move from 11 to 15 some years ago and there are efforts to push for more permanent members, and those discussions are ongoing,”

Greenfield’s view has been too optimistic and soft regarding China’s policies and intentions in Africa at a time when the U.S. government was trying to shed light on China’s many abuses there.

She called for “a win-win-win situation” in Africa, one in which the United States and China would work together to promote values there such as good governance, gender equity and the rule of law. “I see no reason why China cannot share in those values,” she said. “In fact, China is in a unique position to spread these ideals given its strong footprint on the continent.”

Thomas-Greenfield also seemed to excuse Beijing’s debt-trap diplomacy in Africa.“Those who would criticize Chinese predatory lending or the governments who accept these deals must also acknowledge that in many cases, the United States and the West are not showing up or offering viable alternatives,” she said. “This is especially the case because U.S. investment in diplomatic engagement is lagging.”

Biden’s ascension to the White House and his policies have raised many questions. Shortly after coming to power, one of the first things that the Biden administration did was to update the website of the US State Department. It removed China from his policy concerns and renamed the page ‘US relations with China’. Under Trump, the page was titled ‘the Chinese Communist Party: threats to global peace and security.”

With Greenfield in the UNSC and Biden as President, it will be the first time after 5 US presidential terms that US’s stand on India’s permanent seat is ambiguous. Instead of calming the nerves, the Biden administration has pushed its allies away. China on the other hand has increased its aggression against Taiwan. Biden has not been able to come up with an answer and his administrative picks and policies do not seem to indicate that he ever will.