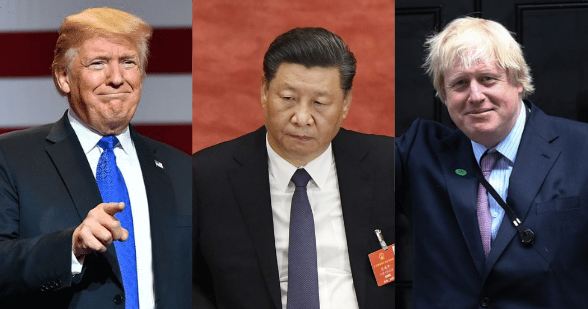 Trump’s departure from the White House, also rid the world of its biggest anti-China leader in the West. But a new leader has emerged in the West. British Prime Minister Boris Johnson has refused to back down and has maintained the pressure on Chinese atrocities and illicit activities despite no support from the US. The actions carried out by the UK suggest that Boris has become the most anti-China leader of the West, and one which the world needs.

The emergence of Boris Johnson comes at a time when the world desperately needs a strong western leader to stand up to China. With Biden in the White House, countries around the globe, along with the staunchest US allies, are apprehensive that Biden’s policies will be an unneeded departure from the Trump era. This is because, Biden has already indicated that his stance on China, despite his aggressive rhetoric, will be soft, co-operative and non-confrontational. This will result in increased Chinese belligerence, animosity and an increase in hostile Chinese diplomacy.

Now the Boris government has cracked down on more than a dozen British universities which are now under investigation over commercial relationships with the Chinese government that might break laws designed to protect national security and human rights.

The security services believe that some scholars have exchanged innovative British technologies with China. The government fears that the technology encourages the persecution of minorities and dissidents by the dictatorial Communist government.

The institutions, which include some of the country’s most prestigious universities, maybe hit by ‘compliance notices’ issued by the Revenue and Customs the UK government over suspected violations of export controls in their dealings with China.

Amid increasing alarm in Downing Street that scholars were engaged in a ‘new gold rush’ to strike deals with the Chinese over cutting-edge scientific breakthroughs, a security service inquiry, headed by MI6 officers seconded to the Foreign and Commonwealth Office, was initiated.

A government spokesman issued a statement stating, “Exporters of military goods and those engaged in transfer of military technology specified in the Export Control Order 2008 – including universities and academics – require a licence to export or transfer from the UK, It is their responsibility to comply with the regulations.”

The increased pressure from Downing Street on engagements with China led Manchester University into cancelling an agreement with a Chinese military technology company after being warned that it supplied technology platforms and apps used by Beijing’s security forces in mass surveillance of Uighur Muslims.

The recent crackdown on China-linked universities is in line with the actions undertaken by the Boris government in the past week. UK media regulator Ofcom revoked the licence for CGTN’s broadcast in the UK after it was revealed that Star China Media Limited (SCML) the company that was issued the licence for CGTN, does not have any editorial responsibility for CGTN’s broadcast in the UK.

Besides, the Boris government has also expelled three Chinese spies in the past year. The trio was considered to be intelligence officers for the Ministry of State Security (MSS) of Beijing and, under the false pretext of working in the media had arrived in the nation on journalist visas.

UK’s recent actions have come amidst rising tensions with its relationship with China. The Boris government in pledging support to Hong Kong residents, launched a visa plan providing citizenship to holders of overseas British passport in just five years. China immediately responded by denying recognition to the passport.

Moreover, China’s belligerence in the South China Sea has also been a cause of concern for the UK. To limit Chinese influence in the said region, Britain is involved in talks with Japan on security co-operation in the South China Sea. Moreover, this year will also see the deployment of a carrier strike group led by HMS Queen Elizabeth as a sign of UK’s increased commitment to the region.

To boldly pursue the security interests in the South China Sea and Indo-Pacific, British and Japanese ministers held a video conference last Wednesday to discuss ways of ensuring a Free and Open Indo-Pacific.

Regarding Xinjiang, the United Kingdom has again pressed policies to thwart Chinese interests. Dominic Raab, Britain’s Foreign Secretary had said that the Boris government would introduce new rules for the UK companies to try to prevent goods linked to China’s Xinjiang region entering their supply chains.

While the US under Biden refuses to take China head-on, the United Kingdom led by the Boris government is painstakingly making it clear that China’s disregard for international norms and its violation of basic human rights will not be tolerated.

Boris Johnson has made it clear, through his recent steps, that despite no support from the US, Britain under his leadership has emerged as the new anti-China leader of the world in the West.

China couldn’t dare to block the Clubhouse app during Trump era. But in Biden era, the biggest platform of Chinese dissent is shutdown