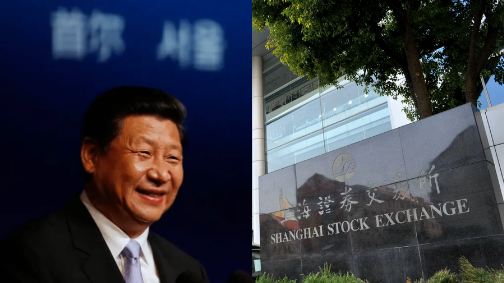 The People’s Republic of China (PRC) isn’t any other country. It is the most spurious system that you will ever witness. The entire PRC works like a big scam and nothing illustrates this better than the sad state of stock exchanges in the Communist nation. Chinese stock exchanges have been hit by a number of scams over the past few years. Insider trading, monopoly and CCP’s bullying are some of the biggest issues.

There are many loopholes in the Chinese stock market regulation, some of them being inadequate penalties and difficulty in proving stock exchange-related crimes like insider trading. Even regulators aren’t given enough resources to detect such crimes. The fact remains that the Chinese government doesn’t want to reform the system, as the biggest beneficiaries of Chinese stock market crimes are state officials, such as the Chinese Communist Party (CCP) elite and leaders of state-owned enterprises.

The issue of insider trading in China cropped up once again in October last year. You must have heard about Huawei- the leading Chinese telecom equipment maker. A middle-aged lawyer in Shanghai received tips about Huawei’s plans to sell the Honor smartphone device as a budget device to handset distributor Digital China Group. The Shanghai-based lawyer revealed that a leading head at Digital China Group told him a thing or two about Huawei’s sale plan.

The Honor episode reveals just how deeply insider trading is entrenched in China. Even the biggest of Chinese private companies aren’t immune from it. Nevertheless, in the year 2019, Digital China chairman and CEO Guo Wei was involved in an insider trading case. He had then revealed information about some other acquisition to a friend.

Interestingly, Digital China chairman Guo Wei was a senior Communist Party member. Huawei eventually sold its unit to a consortium of 30 companies. Yet, Digital China’s stock soared in November, leading to a windfall gain for many.

Jiang, who is a “people’s representative” at China’s national legislature- the National People’s Congress, is accused of trying to repurchase Tianqi lithium shares at significantly lower prices than those on which the shares changed hands through a new share issue after selling them on the market.

And then, there have also been cases involving China’s state-run companies. One of such state-owned enterprises, Gree Real Estate has filed charges of insider trading against its Chairman Lu Junsi. The charges relate to the acquisition of a company, for which Lu also serves as Chairman. The Gree Real Estate Chairman stands accused of having purchased shares in the company even before the acquisition was announced.

This is how China’s stock market system has always been. The level of faith that the general investors can repose in the system is abysmally low. Take for instance, Xu Xiang, one of China’s best-known financiers who was sometimes even called the Communist nation’s equivalent to Carl C. Icahn. In 2016, he pleaded guilty to insider trading and stock price manipulation.

Though Xu was not a Communist Party elite, his plea of guilt, at least, exposed the vulnerabilities of the Chinese stock market regulation.

The level of insider trading in China thus goes to the very top of the corporate and party brass. A number of factors are at play but primarily it is the CCP high handedness that paves the way for the sad state of Chinese stock exchanges.