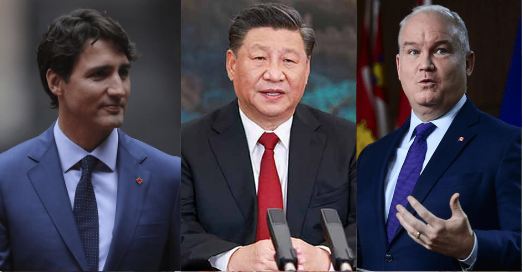 The free world is facing the China threat. And Canada is no exception, as Beijing wants to finalise invasive trade deals and enhance military cooperation with Canada in a bid to interfere with the North American nation’s internal affairs. We know that the Trudeau government is spineless and doesn’t have the ability to take on the Communist nation. Yet, Trudeau might not be the only problem, as the Conservative Party of Canada too lacks anti-China leadership.

See what the Conservative leader Erin O’Toole is up to. He has deleted his party’s petition to ban Chinese telecom giant Huawei from Canada. Conservatives had published a petition to ban Huawei on the party’s official website that read, “Justin Trudeau needs to act, ban Huawei, and protect Canadians from influence and intimidation by the Chinese Communist Party.” Rebel News also reported that O’Toole hired Huawei’s former vice president to run his party’s research and issues management department.

Just look at the irony. In its petition, the Conservative Party of Canada claimed, “Erin O’Toole will stand up to Beijing.” And then in a bizarre turn of events, O’Toole deleted the same petition. There is a loud and clear message for Canadians where they need better Conservative leadership to take on China, otherwise, they will stand betrayed from all fronts on the China front.

He deleted it. But I took a screenshot.

But run it for whom: Canada or Huawei? pic.twitter.com/M1FvRcoSD0

Let us get it straight. Foreign policy never mattered as much in Canadian politics or elections. But from here on, Canada’s future depends almost entirely on its foreign policy. The present leadership in the form of Prime Minister Justin Trudeau is letting Chinese authoritarianism triumph over Canadian sovereignty and autonomy.

Trudeau’s bizarre liberalism is wronging Canada in more ways than one. And most importantly, it is letting Canada forget China’s crimes. Trudeau’s political brand has created a cabinet that is ready to pardon the genocide of Uighur Muslims in the Xinjiang region. It is also making Ottawa forget how China kidnapped two Canadian nationals- Michael Kovrig and Michael Spavor. In fact, China is openly using them as hostages to hold a weak Trudeau government to ransom.

China is a threat. Canadians can see it. Yet, their Prime Minister had unabashedly invited the Chinese People’s Liberation Army, that is, the PLA, to conduct cold-weather training with the Canadian Military Forces back in 2019. Trudeau continues to trust China and Canadians continue to suffer. His horrible diplomacy even led to China stealing Canada’s vaccine technology and leaving Canadians grappling for Wuhan virus vaccines until India came to the rescue.

We can keep talking about Trudeau’s blunders, because he is Trudeau, after all. But out point is how the Conservatives have also failed to make a big deal out of People’s Liberation Army (PLA) war-drills. They are either incapable or completely unwilling to mount public criticism over issues like funding of Chinese State-owned companies with Canadian taxpayers’ money.

Now, what can Conservatives do differently? An overhaul in leadership, one may suggest. Former Canadian Prime Minister Stephen Harper, for example, may be a good option. During his own tenure, Harper did face accusations of getting a bit too close to China but he is a smart leader. He understands how China is a threat and in 2019, he even visited Taiwan, which riled up Beijing.

After his 2015 election defeat to Trudeau, Harper retired into a comfortable private life and started pursuing his own consultancy business. Yet, he can make a comeback, especially because he would want to settle scores with Trudeau by avenging the 2015 defeat. Moreover, there is a clear leadership vacuum in the Conservative Party and a veteran like Harper can help fill the gap.

Then, there are also other emerging threats to Canadian conservatism like Jagmeet Singh’s New Democratic Party and the pro-Khalistan lobby inside Canada, which can easily lead to a diplomatic face-off between New Delhi and Ottawa. China would try to capitalise upon any possible opportunity that comes its way, including the pro-Khalistan lobby inside Canada.

To put it bluntly, the Canadian right-wing needs a new leader because O’Toole seems to have given up on the cause of confronting China and only an experienced veteran can help Ottawa rein in Beijing’s growing influence.