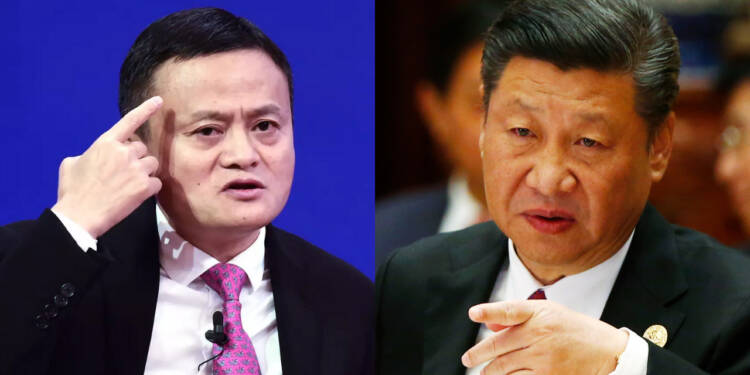 The Chinese Communist Party and its General Secretary – Xi Jinping have been out to grab billionaire Jack Ma by the throat and teach him a lesson for what they believe is his and the Ant empire’s fault of inculcating a culture of reckless spending among Chinese youth, with no steady source of income but a large appetite for overspending. No one should really believe China’s numbers when it comes to its economic growth, but surprisingly – the Chinese economy did not collapse after being battered by the Covid-19 outbreak and resultant stringent lockdowns. So, what caused the Chinese economy to steadily remain on the verge of collapse, but not fall into a deep gorge per se?

Without a doubt, China’s until-recently flourishing fintech industry helped the communist nation’s economy to breathe at a time of unprecedented crisis. However, the effects have now begun showing, as the world slowly moves towards normalcy. China’s fintech industry, led by the likes of Ali Group’s personal-lending services Huabei and Jiebei were used by about half a billion Chinese citizens in the 12 months leading up to June 2020 alone. Such online lending services of Jack Ma’s Ali Group are the lifeline on which China’s youth survives on. 86.6% of Chinese consumers between the age of 18-29 were found to be using lending products in 2019, according to a Nielsen survey.

So, it goes without saying that this category of youthful Chinese citizens also kept the country’s economy afloat by driving consumption at a time when global demand for goods and services slumped. Albeit, such consumption was driven by online lenders seamlessly giving out short-term debts to just about anybody seeking them. Soon, however, the thriving online-lending business caught the eyes of hawks at the CCP, who then came down cracking hard on an entire sector that kept the Chinese economy’s nose above water during the pandemic.

Among the first shots fired by the CCP was the barring of the world’s largest stock market listing of Ant Group’s $37 billion IPO in Shanghai and Honk Kong late last year. Then, the Communists, led by their gang leader Xi Jinping started working towards making life miserable for an entire sector which has been driving domestic consumption in China. New rules now require online money-lenders to originate at least 30 per cent of the loans that go through their platform. Earlier, these companies were acting predominantly as brokers and originated less than 5 per cent of the total loans on their platforms. It allowed fintech companies to shift the associated risk to traditional banks.

The CCP regime was not bothered about the risks of such online loans being carried around by traditional banks until the Covid-19 pandemic threatened the very fundamentals of the overestimated Chinese economy. Therefore, the CCP’s desperate move to destroy entrepreneurs like Jack Ma and paint their enterprises with the red brush of socialism, is fundamentally, an attempt to save China from a financial crisis.

Read more: Is China facing a HUGE DEBT CRISIS? And can its desperate last-minute moves save it?

A financial crisis which China has publicly failed to acknowledge continues to loom over the middle kingdom. After all, much of the online lending business had started yielding bad debts for China. The inability of the country’s youth to repay such debts forced the CCP to take drastic measures to save the already struggling economy of China, apart from a global embarrassment of ‘China’s growth’ in fact, being driven by bad debts.

Yet, the repercussions of cracking down on the fintech sector of China can prove to be disastrous for the CCP, as domestic consumption is expected to crash. While Xi Jinping focuses on infrastructural spending to revive the Chinese economy, he is curbing the ability of Chinese citizens to spend. The Chinese establishment seems to be caught in a catch-22 situation, where it cannot allow people to recklessly avail loans online in order to avert a financial crisis, while also ensuring that consumption does not take a massive hit. However, it seems that Xi Jinping has chosen to offer the Chinese economy as a sacrificial lamb in order to avert a looming financial crisis, by deciding to curb overspending on the part of citizens and reining in fintech companies.

Justin Trudeau is punishing the Conservative Alberta, his ‘Green’ policies have led to a brain drain