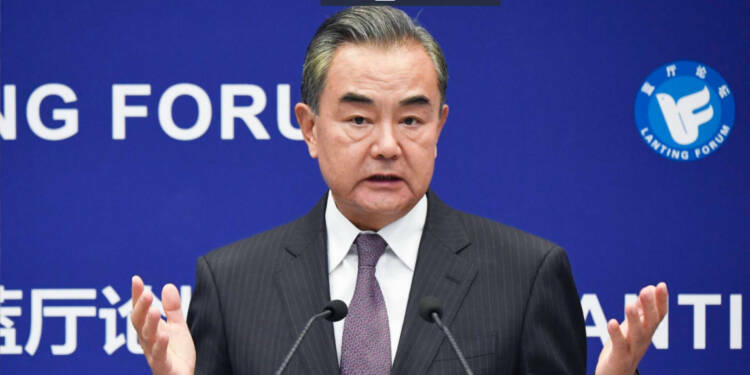 During his trip to the Middle East, Wang Yi was asked in an interview with Al Arabiya about the situation in Xinjiang regarding the known inhumane conditions of the Uyghur Muslims and the claims of racial genocide. The Chinese Foreign Minister quickly became defensive and started citing numbers and statistics. He seemed to understand that this was not enough and like a troubled liar gave a statement that seemed to suggest that China was, in fact, saving the Uyghur Muslims from conversion to Christianity.

The interviewer asked Wang Yi, “Could you talk about the situation in Xinjiang?” to which he replied “Fundamentally, the issues related to Xinjiang are about the fight against violence, terrorism and separatism. There was a time when Xinjiang was a target of frequent violent and terrorist activities, which gravely undermined the right to survival and development entitled to all ethnic groups living there. In recent years, putting the well-being of the people front and center, the Xinjiang region responded actively to the call of the UN, drew on the useful practices of many countries, and redoubled preventive counter-terrorism and de-radicalization efforts. At the same time, it has worked hard to advance economic and social development and improve lives for people in Xinjiang.”

This was the first part of Wang Yi’s explanation about Xinjiang. After this Wang Yi started to spell out statistics and facts and figures, which evidently could not be verified.

“Between 2010 and 2018, Xinjiang’s Uyghur population grew from 10.17 million to 12.72 million, an increase of over 25 per cent, much faster than the two per cent growth of the Han population in Xinjiang during the same period. How can this be called an “ethnic genocide”?” he added.

The main motive to provide this data was to question the widespread and well-documented claims of racial genocide of the Uyghur Muslims. Yet the data seems unverifiable and thus cannot be trusted. Furthermore, Wang Yi then started to talk about how China is doing the opposite of “religious oppression” and creating job opportunities in Xinjiang.

He said, “In Xinjiang, the freedom of religious belief of all ethnic groups is protected in accordance with law. The Quran has been translated and published in Uyghur and three other ethnic languages. After a visit to Xinjiang, the Pakistani Ambassador to China said in amazement that “there are several mosques on the same street”. Public services and facilities in local mosques have seen steady improvement. In particular, all local clerical personnel have access to training programs on Islamic classics, facilities to perform ritual purification, radio and TV, medical, health and other services. How can this be called “religious oppression”?”

Wang continued, “The past five years saw the number of employed people in Xinjiang grow by nearly 2 million, or 17.2 per cent. All ethnic groups there enjoy free choice of employment, full labour rights and interests, and remuneration. How can this be called “forced labour”?”

Finally, Wang Yi spelt out the weirdest part of his explanation about the situation in Xinjiang. He compared the Uyghurs to the indigenous tribal population in the West and how West China is actually working to conserve the culture and traditions of the Uyghurs from conversions.

He said, “In contrast, some Western countries used to include assimilation of indigenous people in government agenda, and forced large numbers of children to convert to Christianity and learn English. In Xinjiang, the languages and cultures of all ethnic groups have always been well protected. The Uyghur and nine other ethnic languages, both written and spoken, are widely used in the judiciary, government, education system, press and publication. For instance, one can find five languages, including Uyghur, on China’s currency – the renminbi note.”

But it has been well documented that Beijing is moving forward with a forced assimilation drive. China’s policies to assimilate other ethnic regional minorities into the Han population have been criticised all around the world – from using coercive physical measures in Xinjiang, to enforcing policies, to destroying the ethnic identity by systematically replacing the culture starting with language.

For decades, Chinese emperors have been concerned with how to govern a vast country with hundreds of distinct cultures. Language proved to be especially difficult. In 1955, the government declared a dialect spoken in and around Beijing “Putonghua” or “popular language” and ordered it to be taught and adopted throughout the country. Other languages, which are spoken by hundreds of millions of Chinese, were reduced to the status of “dialects.”

These policies aimed at gradually assimilating China’s diverse ethnic groups into an assimilated mainstream dominated by the Han Chinese majority (roughly 92 per cent of the population). The government has forced Han migration and investment into minority areas to achieve this aim for assimilation.

The tensions that have emerged as a result of this approach are most apparent in Xinjiang and Tibet, where Han migration and resource exploitation have triggered years of protests and violence. Anti-government demonstrations in both regions were increasingly unruly.

Therefore, Wang Yi’s weird explanation about the situation in Xinjiang was an attempt to save face and as he concluded with the West trying to wedge differences between China and the Arab states, this was an attempt to thaw the relations between the Arab world and China. But such has been the outcry regarding Xinjiang in recent years that it looks unlikely that the Arab World would look forward to having expansive relations with China as long as the Uyghur’s suffer in Xinjiang.