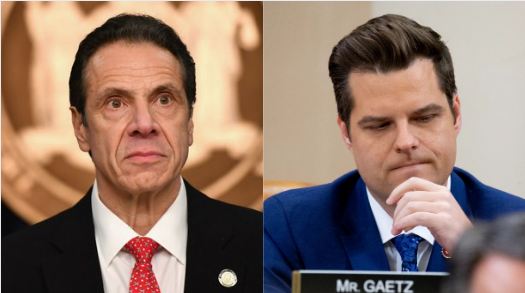 Rep. Matt Gaetz (R-Fla.) has made a reputation for himself as an unabashed, unequivocal and omnipresent supporter of President Donald Trump. Gaetz is fighting to save his political career in the wake of a slew of scandals, but Donald Trump and his supporters have been silent and have refused to defend him. Another high profile sexual harassment case coupled with many other allegations broke out. This time it was the Democrat darling, disgraced New York Governor Andrew Cuomo, but the Democrats banded together to protect him and he remains the Democrat darling.

Governor Andrew Cuomo has been accused of sexual harassment on multiple counts by multiple women. He was involved in a major scandal of covering up COVID-19 deaths inside nursing homes in New York. He is a darling of the Democrats and Leftist media. He was an exemplar in dealing with the pandemic as far as the Democrats are concerned. The Democrats still love him and, most importantly, still support him even though he has been accused of a major cover-up of death in the nursing homes and of sexual assault and harassment by seven women.

Gaetz, on the other hand, has been accused that he participated in a Harry Potter-themed sex game, paid for sex with Apple Pay and showed nude women pictures on the House floor. Yes, these are devious charges too but the Republicans did not toe their political lines to defend one of their own members. They abandoned him as they should have, doing the morally correct thing rather than the politically advantageous one. Few Republicans in Congress became more closely associated with Trump during his presidency than Gaetz. Since the existence of the investigation was publicly revealed, Mr Trump and his close allies have mostly remained silent. Gaetz even asked for a blanket pardon, but Trump refused, citing a bad precedent even before the investigation was publicly revealed.

In the case of Cuomo, the Democrats, especially the top brass, is nonchalant and unconcerned about the whole situation. Nancy Pelosi, an ardent Trump critic, held back in her criticism of Cuomo, asking that all parties involved should be treated with respect. She said, “The women who have come forward with serious and credible charges against Gov. Cuomo deserve to be heard and to be treated with dignity. The independent investigation must have due process and respect for everyone involved.” Asking for respect for a sexual deviant who has been accused by seven different women, and who is also accused of covering up nursing home deaths, is a new low for the Democrat leader.

Jen Psaki, the White House spokesperson said, “Charlotte should be treated with respect and dignity. So should Lindsey.” Psaki added, “And there should be an independent review looking into these allegations. And that’s certainly something [Biden] supports and we believe should move forward as quickly as possible.”

But in Gaetz’s case, it is certainly the opposite, neither Trump nor is anyone in his inner circle running to Gaetz’s rescue. Instead of dismissing such accusations as part of a nefarious, orchestrated witch hunt by deep-state operatives, has said almost nothing at all.

No Trump aide or family members has tweeted about Gaetz in the days after news emerged that the Department of Justice was investigating whether he violated sex trafficking laws — an accusation he denies. Neither have almost all of Trump’s most influential surrogates or Trump-allied conservatives and media figures, such as Sean Hannity, Dan Bongino, Charlie Kirk or American Conservative Union Chair Matt Schlapp, who Gaetz recently addressed at the annual CPAC conference.

While Donald Trump had not come to Gaetz’s defence, US President Joe Biden, in the case of Cuomo, has taken a political stand. Speaking to reporters at an unscheduled Q&A session last month, Biden neither condemned Andrew Cuomo nor did he echo calls for his resignation. He, however, said that the investigations must be completed into the matter, particularly relating to allegations of sexual misconduct against Cuomo.  When asked whether he agreed with other Democrats calling for Cuomo’s immediate resignation, Biden said plainly, “I think the investigation is underway and we should see what it brings us.”

It is quite intriguing how outrage against Andrew Cuomo and calls for his resignation are limited to the New York state itself. It is increasingly being believed that the outrage among New York Democrats is not a sign of their humanism or sense of justice for the victims of the sexual deviant, but because of vested interests.

If Cuomo had been a Republican, the Democrat gang would have been all over him. But as he was a Democrat darling before the COVID-19 investigations, the top brass is putting out unconvincing statements to water down the situation.

Read More: Andrew Cuomo has become too powerful. So, Democrats are destroying him but slowly and carefully because other Governors are too fragile

Taking disciplinary action against Andrew Cuomo or the party’s top leadership calling upon him to demit office will have devastating consequences for Democrat Governors across the country. It will initiate a string of scandals tumbling out of safe closets, resulting in the liberal party being exposed for what it really is. Democrat Governors are not holy cows. They all have secrets to hide – almost all of which could threaten their political careers if someone were to pull the cat out of the bag. Already, TFI has reported how California’s Democrat Governor Gavin Newsom is becoming highly unpopular in the blue citadel.

For this very reason, the strategic silence and carefully crafted statement-making in the Cuomo case are being led by no less than President Joe Biden and House Speaker Nancy Pelosi. It is an immoral stand, to hide and protect a sexual deviant because punishment could tarnish the party lines. The GOP has taken the stand of morality and has refused to defend their party member because he has been accused of various devious allegations. It’s not because they do not trust him, it’s because they are a party of the people and they will stand with the common citizens and protect them from sexual deviants and scandalous individuals rather than protecting their party lines and popularity.

If we go by the massive arms buildup, Arctic is about to turn into the biggest War Theatre in the coming years