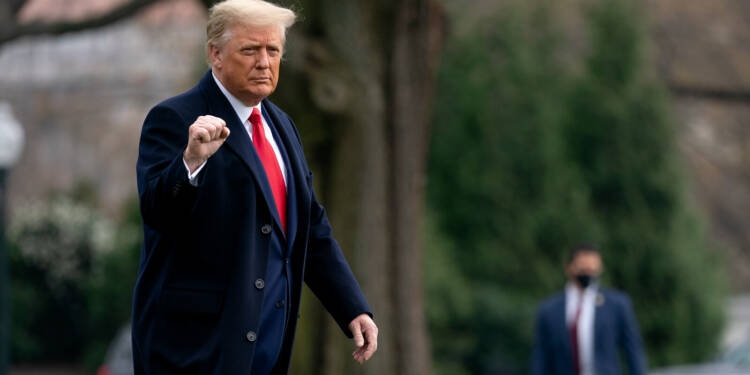 After losing elections, Former President Donald Trump has been unrelenting in his criticism of the woke agenda set by the White House. Current US President Joe Biden has been pushing the left-leaning agenda through his executive orders and also through the senate. But Trump, as mentioned, has been unrelenting and this time he ripped into the current President, the Secretary of State Antony Blinken and National Security Advisor Jake Sullivan on their shambolic Foreign policy.

Donald Trump, in his interview with NewsMax, started with ripping into the woke culture that is being propagated by the Biden administration. Speaking on the watered down Georgia voter bill, Trump said, “They moved the all star game because they thought the bill was too tough when it was not. They’re woke and Woke is not good for our country.”

He added MLB should pay a high price for moving the All-Star Game from Atlanta to “much less diverse” Boulder, Colorado, in response to criticism of the bill as “restrictive.”

Then there was the question on Biden’s foreign policy. The interviewer said, “A lot of people are questioning his (Biden) health and we didn’t had a press conference for 64 days and then we have China, North Korea, Iran and Russia who have all challenged him from day one. When it comes to foreign policy and what the Biden administration is doing specifically North Korea, not even taking their phone calls. Obviously, you (Trump) had a relationship with Kim Jong Un, have you spoken to him? And then what do you think about the Biden administration when it comes to North Korea Biden?”

Read More: Trump was healing the Korean Peninsula, then came Biden. Now North Korea is back to where it was

Trump said that he shared a good relationship with Kim Jong Un, they started rough but then towards the end got along well. He then justifiably said currently the situation with North Korea is very bad and the same when it comes to China.

Moving on towards Iran, Trump said, “If you look at Iran, We would have had a deal done very quickly with Iran the way it should be.” He then slammed the Biden administration for going back on the 2015 Nuclear deal. He said, “Now they are talking about going back into the Iran deal which is unthinkable.”

Trump further said, China looks more assertive and more threatening with Taiwan and he specifically mentioned that China was not as threatening Taiwan when Trump was in charge.

When asked about why states such as China, North Korea, Russia and Iran are treating Biden differently than they treated Trump, Donald Trump said, “They have to respect your leader and they have to accept your leadership and if they don’t it’s going to be very tough”

Read More: The anti-Israel ICC judge, who was sanctioned by Trump, has been given a free hand by Biden to go all against Israel

Then Trump charged with the treatment Russia had meted out to Biden. He said, “Russia had been very tough, you look at what’s happening with Russia. Russia’s very aggressive now, they weren’t aggressive with me. Despite the fact they had the Russian hoax which made it tougher for them and for us, it was a hoax. Despite that, they had respect for the President and they had respect for our country. They don’t respect our country anymore”

At the last of Trump’s assessment on Biden’s foreign policy, Trump added quite sadly, “Countries are not respecting our leadership and that’s for sure.”

And that was a very correct assessment of the US’s current state in the International scenario. The leadership in which countries had banded together under Donald Trump has disappeared. US allies no longer trust the United States to take a stand for them. They are also worried because of the hiding the United States received in Alaska. Biden has lost the plot of his foreign policy and China has taken full advantage of it.