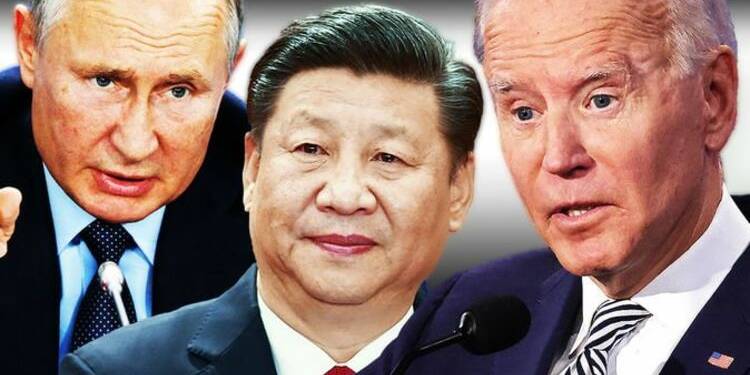 Joe Biden from the very get go has criticised Donald Trump’s foreign policy. However, now he has positioned the US foreign policy in a very precarious and critical situation. While Donald Trump was easing tensions with Russia and Vladimir Putin, he maintained a targeted effort on containing China, but with Joe Biden in office, things have changed. Biden administration had created a confusion in its confrontation with China, giving CCP a boost of confidence and at the same time he has also resurrected the dying confrontation with Russia, by instigating Ukraine. By doing all this, Joe Biden has given Chinese Communist Party a reason to defend its communist rule in China.

The United States has mobilized its European allies to initiate a new diplomatic expulsion drive against Russia, as well as a public opinion campaign. Aside from the situation in eastern Ukraine, Russian opposition leader Alexei Navalny’s hunger strike in jail, as well as news that he is “dying,” has become the latest target of US and allied pressure on Russia.

It is worth noting that countries like the Czech Republic, Poland, Ukraine, and Bulgaria have joined the US in expelling Russian diplomats, citing “activities incompatible with their status” as the main reason. Once members of the Warsaw Pact or part of the Soviet Union, these countries are now often on the frontline of responding to the US’ call to confront Russia.

All of this is happening at a time and place when the Russians would have thought that their embrace of Democracy would make west less hostile towards Moscow, but the reverse has turned out to be true.

Whereas on the other hand, China has increased its activities in the East China Sea, the South China Sea and the Taiwan Strait. At such a moment when Taiwan is facing the most consistent and coordinated bullying, Joe Biden is doing everything to make its ally Taiwan’s situation worse. The Biden administration is approaching China from the position of patience and is not in a hurry, the White House has said. China wants to utilise the Biden Presidency to its fullest, and the fact that Trump could return in 2024, it plans to annex Taiwan before that. And even in the face of all this, Joe Biden’s administration is saying that ‘We are in no hurry.’

Read more: Iran-Israel, Taiwan-China and Russia-Ukraine: Biden is creating flashpoints all around the world and it’s an ominous sign for humanity

As Global Times says, China, as a newly targeted “strategic competitor” of the US, is fortunate that we have witnessed all the colour revolutions in the world in the past 30 years. This is equivalent to having gotten politically vaccinated and received a boost shot to enhance the effectiveness. The Chinese people must protect the fruitful achievements of the People’s Republic of China and remain sober minded about the US’ repeated deceptive clamour that the strategic game between the US and China is a battle between “democracies and autocracies.”

The world is not the same as it used to be in the post-Soviet era or the 2000s. The world is way more multipolar, and the countries are highly interconnected. In addition to the traditional methods of warfare non-traditional methods are also becoming a major concern, and unfortunately the USA is not miles apart from other world countries. And as the USA reignite its rivalry with Russia, China is becoming more and more resolute in securing its own communist government structure. China is now a living example that western powers will not treat a nation differently if they turn to become a democratic nation, it is all about world power competition. And as a result, Global Times has suggested that China should defend its communist rule more vociferously.