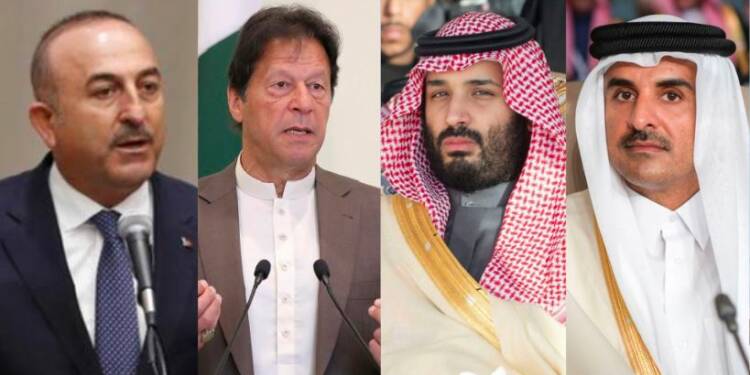 All three countries have been facing strong disagreements and differences with Saudi Arabia. Yet, with the concerted effort to repair ties with Riyadh, these three countries are clearly looking to accept the Saudi leadership of the Muslim world.

The three Saudi challengers had to ultimately agree on Riyadh’s leadership. Take, for instance, Pakistan- the South Asian country that used to be a Saudi ally. For decades, Pakistan’s economy has survived on the basis of economic aid, loans and oil supplies from the Arabs. In fact, Islamabad owes $4 billion in debt to the Arab world.

However, over the past two-three years, a clear rift has emerged in Pakistan-Saudi ties. Pakistan wants to mobilise Arab sentiments on Kashmir- an Indian territory. But the Arabs refused Pakistan’s demand, given their business relationship with India, especially in the oil sector.

In August last year, Pakistan’s Foreign Minister Shah Mahmood Qureshi called on the Saudi-led Organisation of Islamic Cooperation (OIC) to convene a high-level meeting on Kashmir. In Riyadh, Shah’s sharply worded statement was interpreted as a warning that Islamabad was looking to undermine the OIC by raising the issue outside the forum.

Last year, Riyadh reacted to Pakistan’s warning and efforts to warm up to Turkey, by cutting down on easy loans and oil supplies to Pakistan. Initially, Islamabad was ready to befriend Ankara and put its weight behind Turkey’s mission to claim leadership of the Muslim world.

Yet, ultimately Islamabad realised that Turkey is just as bankrupt as Islamabad itself. Notwithstanding all the extremism that Pakistan carries, it felt compelled to ditch Turkey and accept Riyadh’s leadership all over again.

As for Turkey, it did start off with a deep desire to unseat Saudi’s leadership of the Muslim world. Turkish President Erdogan can be often seen as trying to project himself as the protector of all Muslims. But even for Ankara, the economic crisis was hard to ignore.

When the Saudi-Turkey relationship went south in the year 2018, following the killing of Saudi journalist Jamal Khashoggi in Istanbul, Riyadh started boycotting Turkish goods. Then, more differences emerged over issues like Erdogan’s support of the Muslim Brotherhood, and the perceived proximity between Qatar and Turkey.

Yet, the Saudi boycott of Turkish goods did hurt Ankara. Turkey’s economy has gone into a tailspin, with its currency Lira recording a record depreciation last year, inflation running into double digits and a looming balance of payment crisis knocking on Ankara’s doors.

When the Turkish Foreign Minister Mevlut Cavusoglu visited Saudi Arabia, the first thing on his mind would have been to somehow get rid of Riyadh’s boycott on Turkish goods. Riyadh however would not give any respite to Ankara, unless the Erdogan administration gives up his Khalifa dreams and submits to Saudi leadership.

Finally, Qatar too, has understood that there is no use denying Saudi leadership of the Muslim world. Relations between Qatar and the Arab quartet of Saudi Arabia, the UAE, Bahrain and Egypt soured in 2017. Qatar was accused of being too close to Iran and working with hardliners groups.

Qatar had denied the allegations, however, the Saudi-led Arabs broke off diplomatic and trade ties with Qatar. Later, the Arabs demanded that Qatar shuts down the Al Jazeera news network and kicks out a small contingency of Turkish troops, as a condition for rapprochement.

Qatar did not accept Saudi’s conditions, rather it aligned more closely with Tehran and Ankara. Yet, Qatar would have realised how there is not much sense in aligning with Turkey and Iran, both of whom are themselves undergoing a crisis situation.

Secondly, over the past one year or so, Saudi has emerged as a much bigger Middle East power. The Abraham Accords or peace deals between the Arab States and the Jewish nation of Israel with Riyadh’s blessing have elevated Saudi Arabia’s status in the region.

As such, Qatar would have realised that rapprochement with Saudi Arabia brings a lot of leverage. While the other Arab States gained big out of Abraham Accords, Qatar remained devoid only because of its feud with Riyadh. And therefore, Qatar’s Emir Al Thani too decided to seek rapprochement with MBS.

Saudi Arabia has therefore managed to reassert its leadership. Riyadh’s dissidents and challengers are once again submitting to its status as the undisputed king of the Muslim world.

Even as Biden continues his tirade against formal voting rights, the UK is coming up with strict voting laws