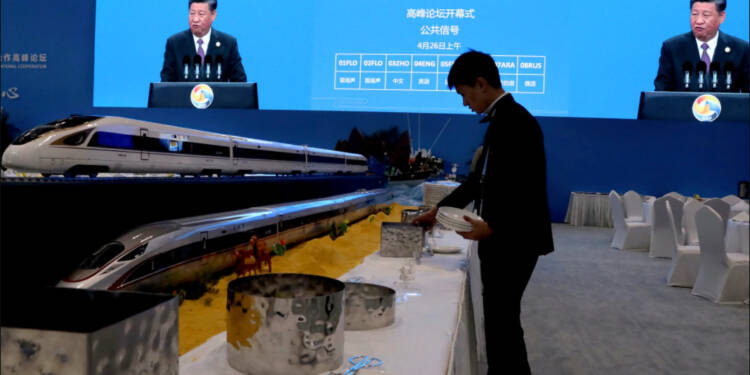 You must have heard about China’s High-Speed Rail (HSR) network. High-speed trains moving at 200-350 km/h give an impression of China’s stunning development over the past few decades. But you know what, these rail lines aren’t so successful after all.

China’s HSR network is spread over just less than 38,000 kilometres. China plans to expand its HSR network to a massive 70,000 km by 2035. The first high-speed train rolled out of Beijing South station in 2008. 13 years hence, China has built the world’s largest high-speed rail network. The development has been stupendous. But the fall of China’s HSR is almost as dramatic as its rise.

China invested billions of dollars in its HSR network. China started investing in dedicated high-speed rail lines towards the start of the 21st century. In 2004, it set apart a budget of $14 billion for the purpose. By 2009, China’s budget for its high-speed rail line network had increased to $88 billion.

In 2018, China had dedicated $300 billion to build a 25,000 km HSR network by 2020. So China has invested well over $300 billion in its HSR project. The result is for everyone to see. China today has a bigger HSR network than the rest of the world combined.

However, China’s HSR network is not just about building a high-speed rail network for its own citizens. Chinese President Xi Jinping’s global investments bear an intimate connection with the 37,900 km-long infrastructure project. You must have heard about the Belt and Road Initiative (BRI), a Chinese project to fund worldwide infrastructure.

Another example of China’s global HSR ambitions is a plan to connect Beijing and Moscow through a high-speed rail line. The biggest international HSR project is however being planned through Xinjiang. China wants to link its far-western province with 40 European and Asian countries with a $150 billion project covering 3,700 miles.

But China’s BRI ambitions are already dying. Countries in Eastern Europe, Central Asia and Southeast Asia are fast abandoning BRI projects because of their unsustainability. China is itself cutting down on BRI and other such projects due to internal and external problems.

However, much of China’s HSR network has already crossed over into low-income, sparsely populated regions. This was a part of China’s plans to connect HSR with the outer world. With China’s international infrastructure projects facing setbacks, China’s High-Speed rail lines in the interior regions are also becoming meaningless. A planned 7,000 km HSR network would have to wade further into rural areas and underdeveloped cities with little economic viability.

Yet, China seems to keep building more and more high-speed rail lines. And this is a part of China’s tendency to boost numbers by splurging billions on infrastructure. Beijing invests massively in roads, ports and rail lines in order to bolster its GDP numbers and maintain the growth trajectory. But massive investments on an imprudent project are hurting Xi Jinping’s China.

China is the first country in the world with a per capita GDP below $7,000 to invest in developing high-speed rail. So, it is not really a surprise that most new HSR lines in China have witnessed a decline in “transportation density”. China’s HSR is facing further problems with the COVID-19 Pandemic and a serious economic slowdown throughout the country.

Meanwhile, China’s provincial governments too seem to be a part of the problem. In a bid to build more and more HSR lines, they borrowed a bit too heavily. Now, China’s HSR network has created an internal debt trap, which is eating into the coffers of the State-owned China Rail Corporation (CRC).

Beijing is now realising it went a bit too far with its HSR ambitions. Work was stopped recently on two HSR projects worth over US $20 billion in Shandong and Shaanxi provinces. For the first time, China seems to be admitting that it went wrong with the HSR building spree. But it may be too little, too late for Beijing. China’s HSR network rose quickly, but its fall has only been quicker.