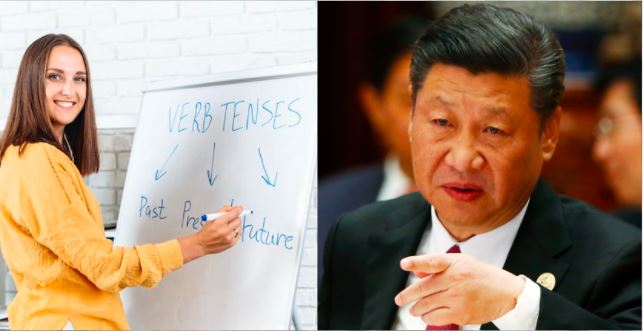 This has never been talked about before. The issue has never been given the attention it should have. China has been hunting down English teachers, and yet, nobody seems to bat an eye. The time has now come to expose the Communist nation of China and its demonic regime led by Xi Jinping for their excesses against English teachers – who almost always happen to be non-Chinese nationals. If anyone has plans to teach the language in China, cancel the plan. If you know anyone who teaches English in China – tell them to immediately return home. If not today, the CCP will definitely come after them tomorrow or the day after.

Since 2018, English teachers are facing intense scrutiny and incarceration in China. They are being accused of drug possession, spying, illegal human trafficking, support for dissidents and also flimsier crimes like violation of their visa provisions. But the main point of contention for the CCP is this – English teachers are making Chinese youth learn the English language. By learning English, the Chinese youth are getting exposed to a barrage of information, which speaks volumes about the reality and dirty secrets of their country and its totalitarian regime.

The ‘Great Firewall’ of China can do only so much. For those who can read English, and are committed to finding out what their country really is, there is no cent per cent mechanism, which can prevent them from finding English content which exposes China and the CCP. This is what scares Xi Jinping. Effectively, the CCP is scared of a language.

According to international law firm Harris Bricken, English teachers who land in China are tested for cannabis consumption by their hair. In a 2019 report, the law firm stated how it was experiencing an exponential increase in queries and grievances from English teachers working in China. These ranged from being falsely accused of drug possession and being jailed for 30 days and even deported, to the teachers not being paid by their employers.

China has also been scamming foreign teachers by not translating the Chinese contracts properly into English. While the Chinese contract has the real information regarding the teachers’ terms of employment and rights, the English version is usually that which makes the teachers feel good and safe. When push comes to shove, however, such contracts become a scalpel used against the English language teachers.

English is a big business in China, with an estimated 400 million people learning the language. Just as it is a big business, it is also a big threat to Xi Jinping’s reign, which is why English teachers are specifically targeted. In 2019, two Americans who ran an English-teaching business in China were detained in the east of the country. Jacob Harlan, the founder of the company China Horizons and Alyssa Petersen, the company’s associate director, were arrested in Jiangsu province. They were officially charged with ‘illegally moving people across borders.’ Who were these two moving across the border, you may ask? According to the Chinese, they were definitely aiding dissidents. Who else would two English teachers “move across borders”?

In 2017, a British teacher was forced to share a squalid cell with up to 15 other people after he was detained while travelling through China. Bobby Silby spent 10 days in a detention centre in Beijing – where he had to watch propaganda videos or films starring Nicolas Cage – for “not being a friend of China” after he publicly criticised the country. The Chinese Communist Party feared that as an English teacher, the man could influence multiple youths to rise up against the regime.

Since 2018, China has been purging English teachers. Back then, the regime had begun pushing for a “cleaner” and more patriotic education system. With teachers making the youth learn English, however, the CCP is served no purpose. Instead, the youth is empowered to have the capability of reading English content which exposes the CCP for what it really is.

China, under Xi Jinping, finds itself in a very tough spot. Contrary to the claims of the CCP General Secretary, China is nowhere near where the CCP tells the Chinese people it is. Instead, it is lagging in a rather shameful manner. An implosion and popular uprising against Xi Jinping and the Communist Party is imminent since the societal, economic and cultural fault lines in China have become very glaring. Indignation, income inequality, discrimination, xenophobia, surveillance and absolutely no privacy are becoming the foundational blocks of a popular Chinese uprising against the CCP.

The CCP has been able to saturate the world centred around the Chinese language with its own propaganda. No free media exists in China. However, the English language cannot be subjugated by China. It is free and is used to expose the reality of China every day. Therefore, the CCP has been targeting those who teach English in China, and that speaks volumes about Xi Jinping’s insecurity.