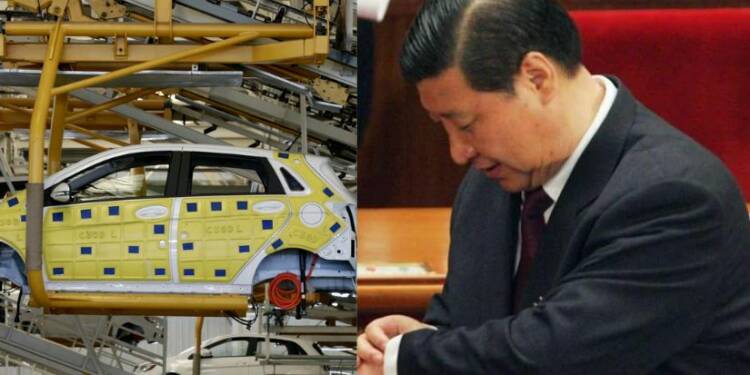 It pains our hearts to write these thoughts down. You have been a strong pillar of the Chinese economy. You have given millions of Chinese citizens the joy of riding and owning cars. You have earned the distinction of being a shameless industry, which is unapologetic about its criminal behaviour.

Oh, dear automobile sector of China, you have earned such a reputation for yourself. Around the world, when real car makers were scratching their heads to bring out new designs and technologies for their models, you were waiting patiently. During your time here, you mastered the art of plagiarism. You never let the Chinese people down, and simply copied popular car designs from around the world.

You have so many records to account for. From the world’s most dangerous and unsafe cars to the world’s lightest ones – you have had so many feathers in your cap.

Rest in peace, Chinese Automobile Sector. We shall always remember you.

China’s automobile sector is dead. All the effort it required for the sector to copy foreign car designs and technologies seems to have taken a toll on the health of the sector. In numbers that speak to the untimely demise of the Chinese automobile sector, auto sales in China fell 12.4 per cent in June from the corresponding month a year earlier. China’s overall sales stood at 2.02 million vehicles in June, according to data from the China Association of Automobile Manufacturers (CAAM).

This fall in car sales comes despite China expecting its auto sector to perform lavishly throughout 2021. According to the CAAM, China’s domestic passenger car sales growth rate was expected to reach 10 per cent in 2021, with the sales of new-energy vehicles exceeding 2 million, a record high or a year-on-year increase of 46 per cent. In May this year, China’s auto sales fell by 3 per cent on a year-on-year basis, and the trend seems to suggest that with every passing month, the sales are dipping.

According to a report by the Guardian, growth at factories in China has slid to a four-month low, according to figures on Wednesday, as a result of semiconductor chip shortages, combined with supply chain problems and rising raw material costs. Semiconductor manufacturers temporarily shut down their operations as the pandemic first took hold in early 2020, and their customers cut or cancelled orders, anticipating weaker consumer demand.

Ever since, the global economy has shown rapid signs of recovery. So, chipmakers are trying to catch up, and output is set to stabilise towards the end of this year, or even 2022 – owing to the long time it takes to produce the semiconductor chips. However, China’s automobile sector does not have the time to survive till 2022, if June’s figures keep repeating themselves or get further aggravated. And then, Covid-19 is hardly over. Future outbreaks could once again force chip manufacturers to halt operations – further damaging hopes of China’s auto sector being revived.

Interestingly, China could have very well relied on its own semiconductor manufacturer – Semiconductor Manufacturing International Co. (SMIC) for making the chips which have proven so essential in auto manufacturing these days. Yet, SMIC is itself in a state of paralysis. Why? Because like all other industries and sectors, China’s chip industry too survived on plagiarism and intellectual property theft – which the United States has clamped down on, leading to SMIC being rendered incapacitated to produce chips.

The Trump administration, in 2020, added SMIC to an Entity List which blocked the company’s access to US chip suppliers and technology. China has been reeling under a semiconductor crunch ever since, and the country’s auto sector seems to be the first casualty of the Trump-era chip ban.

China’s auto sector is not the only one to have taken a hit. Although not due to semiconductors, China’s overall industrial output has also slumped due to raw material price hikes and Xi Jinping’s ego wars with Australia. China’s steel industry, its power sector, and now, the auto sector have all begun collapsing like a house of cards. Its exports too have neared a standstill – since Chinese ports are locked down due to local Covid-19 outbreaks.

All in all, China is caught in a very difficult situation, and it has nobody but itself to blame for all that has come to plague the country.