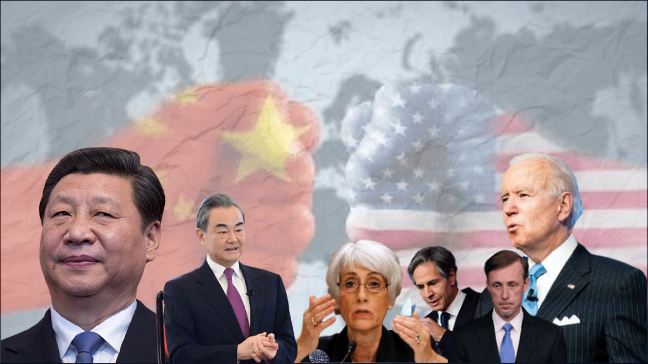 China has done it again. It has humiliated the most powerful country in the world. First, China thrashed the United States of America in Alaska. Then, Beijing’s wolf warriors took on the U.S. in Italy during the G-20 summit. Now, Chinese Foreign Minister Wang Yi has given a dressing down to U.S. Deputy Secretary of State Wendy Sherman in China. At the core of the U.S. getting beaten and thrown around like a doll by China is the Biden administration’s feeble policy of directly dealing with China and its super-aggressive diplomats. The Biden administration’s diplomats, frankly speaking, are no match for Xi Jinping’s wolves.

Joe Biden might try to project himself as a man who is willing to take on China, but when it comes to facing China, his administration simply flares insufficient and lacking in courage. It is therefore not surprising that China has been able to humiliate Washington once again, this time in China’s north-eastern port city of Tianjin. China has accused the US of oppressing Beijing and urged Washington to remove sanctions and tariffs during high-level talks. Foreign Minister Wang Yi said it was up to the US to “make the right choice”.

Read more: ‘USA allies must stick to their anti-China agenda’, Mike Pompeo makes it very clear that Trump will be coming back to power and decoupling with China is inevitable

Finally, China warned the U.S. against infringing upon China’s state sovereignty, or even damaging China’s territorial integrity. It remained indifferent about American and global concerns on Xinjiang, Hong Kong and Tibet. Meanwhile, China claimed in its press release that Wendy Sherman, speaking on behalf of the Biden administration, assured the CCP that the “United States adheres to the one-China policy and does not support Taiwan independence.” So that’s that.

While China was dictating these terms to the United States, it seems none of Biden’s officials grew the spine to get up and tell the Chinese that the USA will not be warned or threatened by serial human rights abusers like the CCP. Biden’s team simply took the Chinese high-handedness lying down, thus besmirching their country’s name. Ask yourself, would China have the gall to behave in such a bullish manner with former President Donald Trump’s officials? In fact, it would be the Trump administration which would straighten China up during such talks, if at all they were ever held – which is a big ‘if’.

China would have never dared do so much as raise its voice when talking to the Trump administration, particularly with a China hawk of Mike Pompeo’s stature around. Pompeo would have put the CCP officials in their place from the word go. In June 2020, Pompeo is said to have blasted Chinese communists in Hawaii, after which bilateral ties between the two countries nosedived. So what if relations between the two countries froze?

Earlier, in Alaska, the Biden administration was left red-faced as China attacked the United States on its very soil. Clips from the talks between the two sides had flooded social media, and the U.S. was seen being thrashed left, right and centre by Chinese representatives Yang Jiechi and Wang Yi. A meek US delegation watched on, as the Communists charged at them with unusually long monologues.

Caught by surprise with the unprecedented aggression being mounted by China, U.S. representatives, particularly Antony Blinken, were seen going hysterical with their body language, as they simply could not contain their inherent fear of China. Then, during the G-20 meeting in Italy, Antony Blinken took to singing the virtues of multilateralism, and Chinese Foreign Minister, without naming the U.S., lambasted the Biden administration.

It has become a regular affair for the U.S. to be humiliated at international stages by Chinese wolf warriors, while Biden’s officials struggle to save face and put up a decent defense on behalf of their country. It is in times like these that Donald Trump and his strong contingent of gutsy diplomats are dearly missed, since they would have put China down if needed.