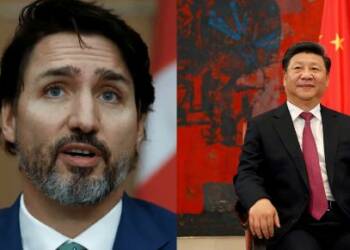 The thing with China is that most of the international leaders hate it and even if a head of State doesn’t hate it, the people of that country compel their leader to take on China. The international public opinion of China is so miserable that even pro-China leaders can’t help it. Take the case of Canada and its Prime Minister Justin Trudeau. Trudeau is a China lover, but the people of his country seem to hate China.

Canada’s Privy Council Office has released data about federal government research which shows that Canadians don’t trust China. In fact, Canadians trust China the least in the world. This should send warning bells ringing for Justin Trudeau. Canadians hate China and Trudeau loves China. If Trudeau doesn’t stop loving China, Canadians might start hating him too and the repercussions could be seen during the 2023 federal polls in Canada.

As per the latest data released by the Privy Council Office, when asked to describe “your level of trust when it comes to Canada working with China,” 59% of the respondents said that they mistrusted the People’s Republic of China. In fact, 32% of the Canadians revealed that they mistrust China “a great deal.”

There is growing cynicism throughout Canada regarding China’s motives. It ranged from 65% of respondents in Alberta to 63% in Saskatchewan and Manitoba, 62% in BC, 58% in Ontario and Atlantic Canada and 54% in Québec.

The research is based on questionnaires with 2,000 Canadians. The Privy Council Office spent $129,854 for getting the research conducted.

The people of Canada actually have every reason to mistrust China. First of all, China’s tendency to interfere in Canada’s internal affairs is something that gets Canadians riled up. Incidentally even as the data regarding mistrust towards China was published, China’s Embassy in Ottawa issued a condescending statement alleging that Canadian authorities torture Inuit.

A report from CGTN says, according to Statistics Canada, the Inuit population are still facing crowded housing, much fewer hospital beds per capita, torture and inhuman treatment, no freedom of thought or religion, etc.

Imagine the Chinese State-run media has the guts to publish a report about the violation of rights of a Canadian community while the Chinese Communist Party (CCP) is orchestrating a genocide of Uyghur Muslims in Xinjiang.

Canadians are also quite angry about China’s “hostage diplomacy“. In 2018, Chinese authorities abducted two innocent Canadians- Michael Kovrig, a former diplomat, and Michael Spavor, a businessman in a tit-for-tat measure merely nine days after Canada arrested Meng Wanzhou, a Huawei executive, on an extradition request from the US. The two Canadians continue to stay in China’s detention.

However, while Canadians have every reason to hate and mistrust China, their Prime Minister seems to trust China almost blindly. Trudeau doesn’t even bother to stand up to the rogue Chinese regime following grave provocations. China, for example, called Canada a ‘running dog of the United States and yet, Trudeau didn’t bother to respond. Chinese diplomats routinely use such uncouth and unbecoming language. However, Trudeau’s silence only emboldens China.

Also, Trudeau seems to be uncomfortable in criticising China. He and his entire cabinet went as far as abstaining from voting on a motion in the Canadian Parliament titled, “Uighurs in China have been and are being subject to genocide”. Trudeau simply doesn’t want to admit that the Chinese Communist Party (CCP) is a murderous and violent regime. In fact, he keeps cooperating with China even though China dupes and blackmails Canada every single time.

Last year, it was also reported that as per a released document, Trudeau had invited the Chinese People’s Liberation Army (PLA) to conduct cold-weather training with the Canadian Military Forces back in 2019. The training proposal however couldn’t materialise because the Canadian Armed Forces cancelled it. So, Trudeau might actually be naive enough to cooperate with China even in critical sectors like defence and military training.

Canadians hate China more than any other nation, and they have a reason to do so. If Trudeau wants to retain even the remotest possible opportunity of winning the 2023 Canadian federal polls, he should understand his nation’s sentiment and start hitting back at China. Otherwise, the people of Canada might as well oust him during the next federal election in the country.