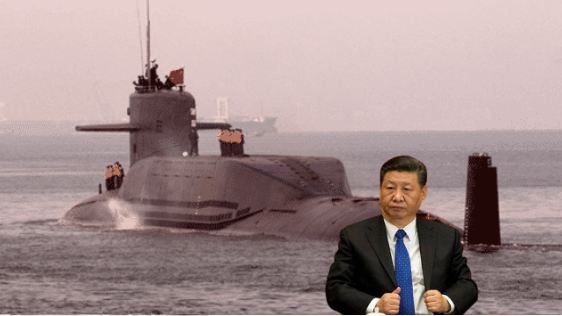 China has a paper navy. It definitely has the largest naval fleet in the world, but at the end of the day, China is nowhere close to the military might of the free world order combined. The bitter pill which China has had to swallow recently is that the South China Sea and the Indo-Pacific at large, are no longer open for the Chinese to play around in. The democratic free world order, consisting of powers like the United States, UK, Japan, Australia, France, India and Germany has descended and is willing to go to any extent to maintain the sanctity of the Indo-Pacific, and not let the region fall prey to devilish Chinese designs.

The Daily Express reported on Monday that sonar operators onboard HMS Kent and HMS Richmond, two frigates that form part of HMS Queen Elizabeth’s escort fleet, detected a pair of PLA Navy Type-093 7,000-tonne Shang class submarines, which are armed with cruise missiles, shadowing the carrier group from the South China Sea into the Western Pacific. Operators aboard the frigates, which were working together in a sweep pattern, located the Chinese “stealth” vessels within six hours of leaving the South China Sea.

The Chinese submarines were located due to their “propeller sounds”. Submarines are naval vessels and assets whose biggest advantage is that they can remain hidden and act decisively in stealth. Submarine targets do not usually know what hit them. But this is certainly not the case with Chinese submarines, whose hallmark is that they are too loud – thus making them easily traceable. China, which claims almost the entirety of the South China Sea, has been caught by the British naval group with its pants down.

Now, the whole world knows just how ‘secretive’ Chinese submarines can get. In a hilarious coverup, and to save the Chinese armed forces of the shame they are currently facing, Chinese foreign ministry pamphlet Global Times published a comical piece, titled, “Media report claiming UK carrier group spots PLA submarines ‘not credible’.” In it, China claimed that its nuclear-powered submarines may have been using the UK’s aircraft carrier group for “target practice before intentionally revealing themselves to British warships”.

Global Times, on behalf of the CCP, quoted some random sources as saying, “As a necessary measure of defense, it is possible that the PLA used the HMS Queen Elizabeth aircraft carrier strike group as an imaginary target for practice.” The pamphlet added, “It is also possible that the Chinese submarines intentionally revealed themselves after having accomplished their missions, sending a warning to the U.K. carrier group.”

The reality, however, is that China’s submarines just cannot remain silent, and reveal themselves to the enemy as a slave to their habit. What this incident, of Chinese submarines being caught right in the middle of the act has done is turn the tables on the CCP. For far too long, the totalitarian Chinese regime has been having its way in the South China Sea and the East China Sea. Now, the free world order is exposing China for what it is, and in the process, emboldening countries in the region to stand up to Beijing.

Read more: India is going to storm the South China Sea, with scant regard to CCP’s objections

We at TFI recently reported how India is all set to deploy four warships in the South China Sea for the next two months, for participating in various military exercises with Quad countries and ASEAN partners. Experts suggest that this deployment is going to be India’s most glaring naval presence right in the face of Chinese naval force in the region. The Indian naval fleet is reportedly comprised of a guided-missile destroyer, guided-missile frigate, anti-submarine corvette and guided-missile corvette; that will embark upon a two-month deployment to the troubled waters.

In May, France’s “Jeanne d’Arc” training squadron arrived in Japan. The French Army also joined the Japanese Ground Self-Defense Force and the US Marine Corps for remote island defence training on Japan’s Kyushu Island. France has been increasing its involvement in multinational military drills with Japan and other democracies in the East China Sea and other parts of the Indo-Pacific to send out a clear message to China.

Japan has involved both Russia and France to deal with China in the East China Sea. The island nation has also raised cooperation with Moscow on the disputed Kuril Islands and the Russian Far East, thus blocking China’s only pathway to the Arctic. The US, in any case has a presence across the Indo-Pacific. What is happening, therefore, is that China is being surrounded in its very own backyard by powerful nations, who are no longer willing to give Beijing a pass for any of its misadventures.