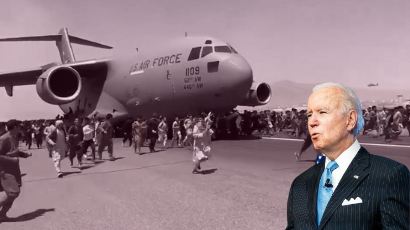 Joe Biden wants to become the most insensitive US President till date. And with his Afghanistan blunder, Biden is, again and again, showing that he doesn’t care about Americans in Afghanistan. The US President did not plan the evacuation of American citizens properly. Now, US citizens stranded in Afghanistan have a very limited time left to come back to the United States.

For starters, Biden has stuck to the August 31 deadline for the evacuation process, citing the threat posed by the Islamic State Khorasan Province (ISKP).

Moreover, the Pentagon has said that the removal of American troops and military equipment will be prioritised on the last two days of the evacuation process. This simply translates into the evacuation of lesser civilians. Meanwhile, a nonchalant Biden has been caught joking about stranded Americans with little hope of getting rescued from the war-torn country.

#Afghanistan: #US evacuations from #Kabul airport to end in 36 hours, so that the evacuation of military assets and personnel can proceed.pic.twitter.com/KTrg5Acj3P

While August 30 and 31 have been reserved for prioritising military evacuation, the Kabul airport is in utter chaos and unlikely to facilitate the US evacuation process in its present shape. On August 25, the US Embassy in Kabul issued a security advisory for US citizens.

The advisory stated, “Because of security threats outside the gates of Kabul airport, we are advising U.S. citizens to avoid traveling to the airport and to avoid airport gates at this time unless you receive individual instructions from a U.S. government representative to do so.”

It added, “U.S. citizens who are at the Abbey Gate, East Gate, or North Gate now should leave immediately.”

So, the US citizens are unlikely to get much assistance on the last two days of evacuation and till then, they are advised to avoid travelling to the airport. Things are, in fact, getting very serious with terror blasts at the Kabul airport on Thursday killing 13 US service members and injuring 18. At least 60 Afghans have also died in the terror attack and around 140 have been injured.

Quite clearly, it is unadvisable and impractical for the US citizens to head towards the Kabul airport because their spineless President has failed on something as fundamental as securing a safe passage for American citizens. Biden has practically given up on American citizens in Afghanistan. And worse still, the US President doesn’t even regret leaving behind US citizens.

On Wednesday, Biden was talking about cybersecurity during a press conference. The US President has his priorities fixed and clearly, cybersecurity comes above stranded Americans in Afghanistan. Anyhow, NBC News’ Peter Alexander asked a really important question- what would happen to the Americans who still remain in Afghanistan after the August 31 deadline?

What followed was absolutely unbecoming of the US President. Biden smirked in a contextually contemptuous way and that is exactly when the White House cut the audio feed to save itself from a major faux pas. Fortunately, we have come to know what Biden said.

REPORTER: “If Americans are still in Afghanistan after the deadline what will you do?”

As per Peter Alexander, Biden responded, “You’ll be the first person I call.”

I asked President Biden what he will do if Americans are still in Afghanistan after the 8/31 deadline.
His response: “You’ll be the first person I call.”
Took no questions. pic.twitter.com/MlyFIayrMZ

Biden may be joking about the Afghanistan evacuation, but the problem at hand is pretty serious. Taliban spokesman Suhail Shaheen clearly said, “If the US or UK were to seek additional time to continue evacuations, the answer is no.”

Shaheen made it clear that the August 31 deadline for US troops withdrawal is a “red line” and also warned of “consequences” if the deadline is extended beyond the scheduled timeline. This is why Americans are worried about the evacuation process in Afghanistan but Biden’s reaction shows that he is ready to sacrifice Americans still remaining in the wartorn country after August 31.

Whatever transpired is scandalous, shocking and inappropriate even for someone like Joe Biden. Of course, the US liberal media doesn’t find Joe Biden’s answers problematic. While the vindictive American liberal media had engrafted a conversation about the former US President’s mental health, it isn’t even questioning Biden’s patently unnatural reactions to an issue as serious as the evacuation of Americans from Afghanistan.

However, for an average American, Biden’s indifference towards the citizens stuck in Afghanistan is bound to get connected to the US President’s extreme old age and seemingly uncontrollable faculties.