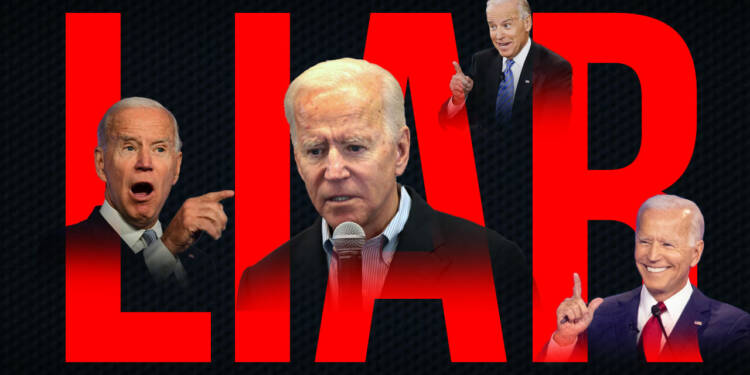 Joe Biden is a habitual, serial and compulsive liar. There is not a day the man can go without lying through his teeth, while an entire media industry owned by the Democrats cheers the man for simply not being Donald Trump. The disastrous surrender by the Biden administration to a medieval theocracy in the form of the Taliban in Afghanistan has unleashed before America a wave of global shame which it has never witnessed in the past. There is no amount of sugar coating which can save the U.S. President now. He has stretched his luck too far, and has been caught lying as Americans continue to remain stranded in Afghanistan.

Joe Biden has called his pull-out from Afghanistan an “extraordinary success”. Little does the frail, yet conniving man know that his ill-planned and absolute disaster of a pull-out has ended up having catastrophic consequences. The Taliban is back in power, but that is not even the worst of what Biden has caused with his ‘withdrawal’. To justify his actions, Joe Biden and his entire administration have been lying. The only silver lining really is that they are being exposed for their lies now.

LIE 1: There was no indication that Kabul would fall so soon to the Taliban

If lying is an art, Joe Biden is a sheer failure at it. Incidentally, the White House and Democrat-friendly media played a pivotal role in spinning the narrative that Kabul would remain safe for at least six months, and would not fall like a house of cards to the Taliban. While Joe Biden and his lackeys lie about them having no clue that Kabul would fall so soon, the reality is polarly different.

According to an explosive report by the Wall Street Journal, President Joe Biden and his Secretary of State Antony Blinken were warned of a collapse of the civilian government in Afghanistan and a Taliban takeover of Kabul as early as July 13. The July 13 classified cable from Kabul even predicted that evacuation of American citizens, friends and assets could become a problem soon.

However, when asked whether the intelligence community really felt the collapse of Kabul was imminent, Biden lied, saying, “That is not true…the likelihood there’s going to be the Taliban overrunning everything and owning the whole country is highly unlikely.”

LIE 2: The Afghan security forces will be able to fight the Taliban and win against it

Joe Biden projected the narrative that the Afghan security forces were well equipped and trained to deal with a Taliban invasion on their own. *But the Taliban was not alone. It had the support of the Pakistani Army and Al-Qaeda.* As is evident, that was an assessment so far from reality that the U.S. President was left in a drought of words to defend himself. Yet, had Joe Biden genuinely not known the ground realities of Afghanistan, he could have been pardoned. The truth, however, is that Biden not only lied, but in fact, manufactured a false narrative of the Afghan security forces having an upper hand over the Taliban.

Joe Biden’s 14-minute call with then Afghan President Ashraf Ghani reveals the evil that has currently occupied the White House. During the phone call, despite being aware of the fact that the Taliban was defeating Afghan security forces in one province after the other, Biden told his counterpart – Ashraf Ghani that he should fix his government’s “perception problem”.

Biden told Ghani, “I need not tell you the perception around the world and in parts of Afghanistan, I believe, is that things are not going well in terms of the fight against the Taliban.” In a shocking demand, Biden then directed Ghani, “And there is a need, whether it is true or not, there is a need to project a different picture.”

LIE 3: All Americans, allies and Afghan friends will be evacuated out of Afghanistan

On August 20, Joe Biden was heard confidently saying, “those Afghans who have worked alongside us, served alongside of us, gone into combat with us and provided invaluable assistance to us…they’re equally important, almost.” Joe Biden also said, “And if there are American citizens left, we’re going to stay until we get them all out.” The President added, “…let me be clear, any American who wants to come home, we will get you home.”

Today, a majority of the Afghans who helped America in the 20-year long inconsequential war remain stranded in the Taliban-controlled country. Innumerable Americans, who according to the Pentagon, could not reach the Kabul airport, continue to languish in Afghanistan. The Biden administration has no strategy whatsoever to safely evacuate these desperate Americans out of the war-torn country. Yet, Biden shamelessly claims that the airlift out of Afghanistan was a ‘success’.

LIE 4: The United Kingdom is responsible for the Kabul blasts’ devastation and loss of American soldiers’ lives

The Biden administration has alienated its oldest, and most trusted partners. It has infuriated the United Kingdom, by subtly pinning the blame of the Kabul blasts and the damage caused by the same on London. POLITICO, which has deep ties with the Democrats, reported that American commanders wanted to close the Abbey Gate at Kabul airport ahead of the attack, but kept it open longer to allow Britain to continue evacuating personnel based at the nearby Baron Hotel. In response, British Prime Minister Boris Johnson’s spokesperson told reporters it was “simply not true to suggest we pushed to keep the gate open.”

Joe Biden was combative when he announced that the perpetrators of the Kabul serial blasts, which led to the death of 13 American soldiers, would be avenged, telling the perpetrators, “We will hunt you down and make you pay.”

LIE 6: Afghanistan will not see a repeat of Vietnam

Well, what happened in Afghanistan is far worse than the horrifying scenes which were witnessed in Vietnam, when the U.S. was forced to flee the Southeast Asian country in absolute desperation. Asked by a reporter on July 8, “Do you see any parallels between this withdrawal and what happened in Vietnam,” Biden was indignant. He said, “None whatsoever. Zero.”

Not even a month after Biden said these words with his false sense of bravado, pictures came from Kabul of a US helicopter flying over the American embassy. Nearly 200 Americans fled the Baron Hotel on Chinooks when they couldn’t reach the Kabul airport, just 650 feet away, any other way.

On August 10, Biden said, “I’ll insist we continue to keep the commitments we made of providing close air support, making sure that their air force functions and is operable.” This was in addition to a commitment of continued air support he made to President Ashraf Ghani during his July 23 call.

However, on August 14, the Wall Street Journal reported, “In the wake of President Biden’s withdrawal decision, the US pulled its air support, intelligence and contractors servicing Afghanistan’s planes and helicopters. That meant the Afghan military simply couldn’t operate anymore.” This shows how the Biden administration simply abandoned the Afghan security forces and did not fulfil its promises.

Biden’s approval ratings are dipping with every passing day, and Americans have made it clear they do not want Kamala Harris as their President, while also wanting Biden to quit office. 32% of Democrats agreed, according to a recent Rasmussen Reports poll, that Biden should resign over the Afghan debacle. 75% of Republicans want Biden out of office. Joe Biden might just not survive the entirety of his presidency, given how he has proven to be an unmitigated failure in his first six months at the White House.