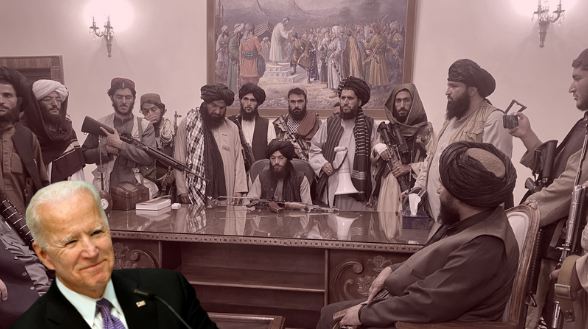 Joe Biden knew all along. He knew precisely what was going to happen when the US left Afghanistan in a dying hurry. As a matter of fact, he did not just know, but was counting for Afghanistan to spiral down the road of violence, chaos and violent extremism. Joe Biden has propelled the rise of the Taliban. He is the man who has facilitated the entry of the organisation into Kabul. For his own petty geopolitical ambitions, Joe Biden has chosen to sacrifice a country of 31.5 million people at the altar of hatred for Russia. It all makes sense now.

Why did Joe Biden not pull out American civilians first? Why did he pull out the troops first? Even if he pulled out the troops, why did he leave large amounts of weapon systems, arms and ammunition back in Afghanistan? Did he want the Taliban to get its hands on such equipment? Yes, as a matter of fact, he did. Joe Biden is an old man, but that does not mean he does not have some very evil designs. In his hatred for Russia, Biden has chosen to support the Taliban, and the world should not be surprised if official recognition for the terror organisation follows soon.

According to an explosive report by the Wall Street Journal, President Joe Biden and his Secretary of State Antony Blinken were warned of a collapse of the civilian government in Afghanistan and a Taliban takeover of Kabul as early as July 13. Using a special ‘dissent channel’ within the State Department, the cable – sent to Secretary of State Antony Blinken and another top State Department official – warned of ‘rapid territorial gains by the Taliban and the subsequent collapse of Afghan security forces,’ and offered suggestions on how to speed up evacuation and mitigate the obvious crisis slated to ensue.

According to the report, the classified cable – signed by 23 US embassy staffers of Kabul represents the clearest evidence yet that the Biden administration had been warned by its own officials on the ground that the Taliban’s advance was imminent and Afghanistan’s military may be unable to stop it. The cable was given a “rush status”, as the US embassy was able to predict by mid last month that a Taliban takeover of Kabul was imminent.

Yet, the Biden administration really began civilian evacuation from Afghanistan only after the Taliban had taken over Kabul. Why did it do so? Why did Joe Biden choose to play with the lives of innocent civilians, and turning thousands of them into hostages of the Taliban?

This was done with the sole intention of helping the Taliban. Joe Biden did not want to be alone in sharing the mess of Afghanistan. So, he planned for the entire world to be made a party to the Afghan crisis. Consider this – the Biden administration kept all of America’s allies out of the loop on what was going on in Afghanistan, and despite knowing what was about to happen, did not warn them. This resulted in not just American citizens being stranded in Afghanistan, but citizens of all countries which operated embassies in Kabul.

This was done to ensure that multiple nations open up lines of communication with the Taliban to ensure safe passage for their citizens out of Afghanistan. It almost seems like Joe Biden and the Taliban are working together, and that the US president is, in fact, helping the Taliban’s endeavour to project itself as a non-hostile and mature entity that respects human rights and foreign powers. This would then result in the Taliban winning international recognition.

Furthermore, Joe Biden has simply abandoned cutting-edge American weapon systems and military equipment in Afghanistan for the Taliban to capture. Such military hardware will be shipped to China for reverse engineering. China will then make its own variants of such equipment, to be used to flex muscles against Russian allies in Central Asia. Effectively, Joe Biden has cleared the road for China, Pakistan and the Taliban to collectively challenge Moscow’s influence in Central Asia, which serves the larger goals of the Democrats to see Russia being weakened geopolitically.

This is not the first time that the US has worked with the Taliban or associated mujahideen groups in Afghanistan. Zalmay Khalilzad, the USA’s ambassador for Afghan reconciliation had written in 1996, “The Taliban does not practice the anti-U.S. style of fundamentalism practiced by Iran – it is closer to the Saudi model. The group upholds a mix of traditional Pashtun values and an orthodox interpretation of Islam. The departure of Osama bin Laden, the Saudi financier of various anti-U.S. terrorist groups, from Afghanistan indicates some common interest between the United States and the Taliban.”

Our Senior Editor, Shubhangi Sharma stated in a series of tweets, “If a superpower who’s had to surrender & is thinking about the big picture & not collateral damage, it would leave Afghanistan the way Biden did. A civilian autonomous govt was no good, a Pak-China-backed terror group that destabilises primarily Russia’s vicinity was better.

If a superpower who’s had to surrender & is thinking about the big picture & not collateral damage, it would leave Afghanistan the way Biden did. A civilian autonomous govt was no good, a Pak-China-backed terror group that destabilises primarily Russia’s vicinity was better.

She went on saying that as for Taliban bid backfiring at Pak & China, that is a gamble they have been more than ready to take. Afghanistan was set for a great game among Russia, China, Pak, Iran & India. But leaving in chaos, strengthening Taliban, all tilt stage in favour of China & Pak but may also trap them. Going on she added, “a botched-up evacuation with no strategy may have been the strategy. Biden suspended Trump’s evacuation plans. Now, thousands of foreigners including Americans are Taliban’s hostages. The US is trading legitimisation of Taliban for safe evacuations & others are forced to deal with the Taliban too.

“Biden is doing more to crown the Taliban king than to delegitimise and punish it. He sidelined crucial intelligence. He criticised civilian govt. No word on Pak complicity with Taliban. One or two mistakes can be discounted for old age, ineptitude. After that, it’s deliberate,” she said on Twitter.

Joe Biden has orchestrated a crisis in Afghanistan and helped the Taliban grab power in the war-torn country only to serve his petty foreign policy goals. The world community must hold the septuagenarian accountable for his devastating actions.