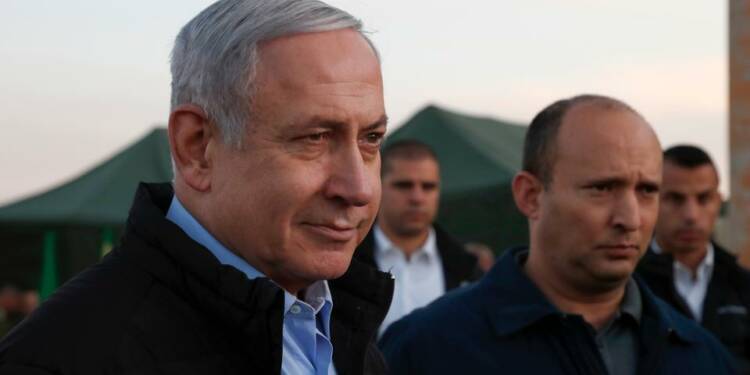 A recent cartoon in Israel’s Maariv newspaper showed just how divided the rainbow coalition ruling the Jewish nation really is. In the cartoon, Israel’s Defense Minister Benny Gantz was the student and Prime Minister Naftali Bennett the teacher, who drew on the board a “lesson about Abbas” with two pictures. The picture of the Palestinian leader Mahmoud Abbas had on it the word “evil” and a picture of Ra’am (United Arab List) head Mansour Abbas was labelled “good.” Mansour Abbas is a coalition partner of the Naftali Bennet-led government in Israel. However, Defense Minister Benny Gantz is taking successive steps to discount Bennet’s leadership.

Here’s what has happened now. While Gantz was shown as the student and Naftali Bennet as the teacher, a new character seems to have entered the fray. The principal has entered the classroom with a big stick. Benjamin Netanyahu – the principal is now in the room with Gantz and Bennet to straighten both out, and he is making sure that the glaring differences between the coalition partners of the ruling government are used to propel his rise to power once again.

According to the Jerusalem Post, the ‘change government’ of Israel – whose sole mandate is to prevent the return of Netanyahu to power, is currently “walking on eggshells”. For those well versed with the game of cricket, the Naftali Bennet government can also be said to be on a weak wicket. The point is, things are not going well for the current Israeli government. Infighting is surging, the opposition is battering it every step of the way while also simultaneously plotting a return to power, and the Arab-Israelis are getting all the attention.

Amidst such shaky times for the ruling coalition, the opposition Likud party has come up with a plan. According to the Jerusalem Post, the Likud party met last Sunday to devise strategies for bringing down Prime Minister Naftali Bennett’s government, starting with the state budget. The budget must be passed into law by November 14 or an election would be automatically initiated. Interestingly, the meeting came at a time when Benjamin Netanyahu was still on his family vacation on the luxurious Hawaiian island of Lanai.

According to Likud sources quoted by the publication, “Don’t be surprised if Netanyahu returns to be prime minister in the current Knesset.” The Likud source, who was a part of the meeting intended to bring down the current government said, “When Kadima took power, no one thought we could bring them down, but we succeeded, thanks in part to a mega-event called the Second Lebanon War. Now there is a mega-event called the coronavirus, and there is a coalition that is much more diverse. We will break them. It is only a matter of time.”

Following the meeting, the budget was divided up and assigned, and all the Likud legislators in the faction received their tasks in stopping the budget and toppling the government. Therefore, the work to topple the government has been set in motion, and if the plan succeeds, Naftali Bennet could cease to be the Prime Minister after November 14.

Read more: Two parallel governments are running in Israel as the third one is poised to make a re-entry

Netanyahu is plotting his return to the fray for quite a long time now. He is hunting for the best opportunity to take down the fragile coalition government. As reported by TFI, since losing the Prime Minister’s post to Bennet, Netanyahu is following a carefully orchestrated schedule of visits to all the Likud strongholds. They are places where people still refer to him as the prime minister and are eager to see him back in the office.

What further motivates the Israeli opposition and Benjamin Netanyahu to exacerbate the present government’s rainbow coalition is the fact that its two seniormost functionaries are sparring with each other. Prime Minister Naftali Bennet and Defense Minister Benny Gantz are making no secret of the fact that all is not well between them.

Recently, Gantz held a meeting with Palestinian Authority President Mahmoud Abbas, and this has irked Bennet. Gantz painted the two-and-a-half-hour meeting as necessary to deal with arrangements for delivering funding to Palestinians in Gaza while bypassing Hamas. However, the Prime Minister’s camp is arguing that Gantz is scripting his own rise to power by exacerbating the existing fault lines between the ruling coalition’s Right and Left constituents.

Benny Gantz is really stealing Bennett’s thunder by taking a central role in his dialogue with Palestinian Authority (PA) President Mahmoud Abbas. What adds to Bennet’s woes is the fact that a major breakthrough was reached during the high-level meeting. The Israeli Defence Minister announced a loan worth $155 million for the Palestinian Authority.

The atmosphere is really conducive for Benjamin Netanyahu to sail back to power, and he is planning to do just that.

Taliban had it coming: Infighting between Taliban and Haqqani network makes Pakistan nervous