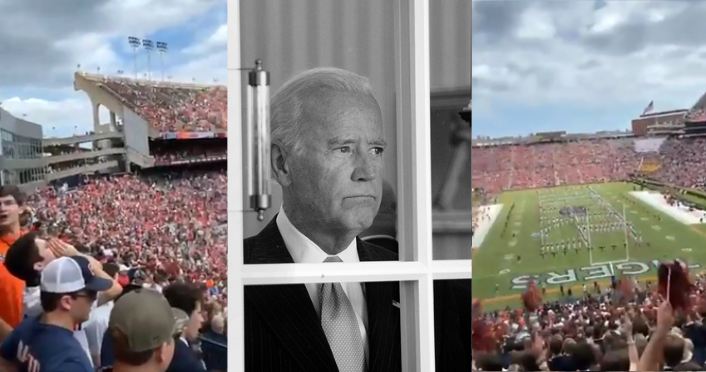 President Joe Biden’s approval ratings are in a freefall. The Democrat’s approval ratings stood at 45.8 per cent on Friday. A majority of Americans are today seething with anger against their President. And they are making no secret of the fact that they do not like the way in which their country is being run. Americans want the United States taken care of. However, Biden has reduced the USA into an object of global shame and ridicule. Domestically, Biden is polarizing the society at an unprecedented level, even while liberals might want to believe that he is ‘healing’ the nation.

Americans are throwing expletives at President Joe Biden like they have never done before. Unfortunately, Biden has nobody but himself to blame for the same. He has done so much to deserve being hounded publicly. College football fans have taken to chanting, “F— Joe Biden!” in the stands during games, and Saturday marked the second straight weekend of presidential taunts. During the weekend of September 4, at least four instances of the chant “F— Joe Biden!” were identified.

The chants broke out at Coastal Carolina University, Virginia Tech, Auburn University, and Texas A&M. On September 11, the chants broke out again at the Auburn/Alabama State game. The protest chant – with the simple lyrics ‘f*ck Joe Biden’ sung between claps by young students threatens the very presidency of Joe Biden, as the lyrical chants can very well become a trend against Democrats, causing grave damage to their fortunes just before the crucial midterm polls.

Donald Trump Jr. predicted, meanwhile, that the trend will continue. He said the Biden presidency has “gotten so bad that the media can’t run cover for him anymore.”  He added, “When you look at Afghanistan, and I can go through fifty points on it, $65 to $80 billion of equipment left to our enemies, giving them a kill list of American citizens, giving them the biometric scanners… pulling out the military before you pull out civilians,” Trump Jr. said. “The list goes on and on.”

After all the chants during week one, it’s hard to disagree. pic.twitter.com/ogzUvNCDf7

To add to it, Joe Biden has also made Covid-19 vaccines mandatory for federal workers, and this is causing a lot of outrage among Americans. On the new vaccine rules, Trump, Jr. said, “It’s a little bit crazy. None of this lines up – the whole, ‘my body my choice,’ except for when the government mandates something – it doesn’t work, but no one’s calling out the hypocrisy.”

The Biden Presidency – From Bad to Worse

Biden’s approval ratings are dipping with every passing day, and Americans have made it clear they do not want Kamala Harris as their President, while also wanting Biden to quit office. 32% of Democrats agreed, according to a recent Rasmussen Reports poll, that Biden should resign over the Afghan debacle. 75% of Republicans want Biden out of office.

Read more: 7 Lies of Joe Biden that turned Afghanistan episode into a global shame for America

The US is fast losing its status as a net security provider to its allies in Europe, Asia and the Middle East. Biden’s botched-up Afghanistan withdrawal has sparked security concerns in the Middle East, that has left the fate of countries like Saudi Arabia and Iran hanging in the balance. Biden has successfully botched up the USA’s relations with all key players of the Middle Eastern region in less than eight months of his presidency. Biden has led to the descension of South Asia into a period of uncertainty with his abject surrender to the Taliban. Central Asia too is now facing an imminent threat from a Taliban-ruled Afghanistan. China is getting emboldened, and all in all, Biden is really screwing things up internationally.

Leave alone evacuating friends of America and its allies, the United States was not even able to successfully evacuate its own citizens from Afghanistan. And now as the last of US troops have withdrawn, those who have been left behind are people who have helped the US and its allies throughout the 20-year long inconsequential war in Afghanistan. And due to Joe Biden’s ill-intended withdrawal, all these people are left at the Taliban’s mercy.

Domestically, vaccine mandates, failure to curb Covid-19 despite widespread vaccination, indifference towards the USA’s brave soldiers and veterans and the pursuit of a radical left-liberal agenda are all contributing to Biden becoming a very unwanted and disliked President. With barely months to go for the midterm polls, the Democrats are not in the best position to even retain their hold over one house of Congress.