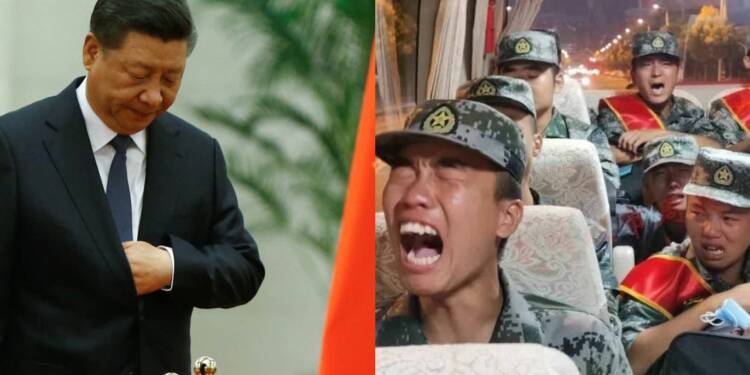 The People’s Liberation Army of China’s only justification to exist in the modern world is that they emerged victors in the Chinese Civil War. Apart from that victory, there isn’t really much for the PLA to account for. The last real war which the Chinese armed forces fought was in 1979 against Vietnam, where Ho Chi Minh handed the Chinese soldiers their pants. In fact, the Peoples Liberation Army, as explained by TFI last year itself, is a force of wimps, sissies and little emperors. As such, it is plagued with the menace of low troop morale, which makes it impossible for China to win any conflict.

Now, according to Nikkei Asia, the Chinese Communist Party has ended up unintentionally revealing the weaknesses of China’s military, and low troop morale forms the centre of it all. First, the building of facilities for launching new intercontinental ballistic missiles (ICBMs) in an inland desert region has exposed the PLA for its ineptitude. It must be remembered that China is armed with submarine-launched ballistic missiles, known as SLBMs. Therefore, it makes no sense for China to build ICBM launch facilities deep inside the Chinese mainland. Yet, it is doing so, because the CCP simply does not trust PLA soldiers to mount an offensive against the enemy, for fear of their own lives!

Read more:  China’s noisy submarines get them caught again as Japan discovers them in contiguous zone

In January 2018, a Chinese submarine humiliatingly revealed its lack of high-level performance. The submarine, travelling undersea in a contiguous zone of Japan’s Senkaku Islands, in the East China Sea, was quickly detected by the Japanese Self-Defense Forces. Being the force of wimps that the PLA (Navy) is, the submarine was quick to surface and unhesitatingly raise the Chinese flag, which, according to Nikkei, “might as well have been a white flag of surrender.” This was done since the crew feared the submarine would be attacked by the Japanese. The incident had brought shame upon China, and the CCP realised that despite having a seemingly strong military with a diverse set of weapon systems, those operating its hardware are simply unfit for active combat.

The One-Child policy was brought into force in 1979 by the CCP, to curb the menace of a growing population. Anyone with more than one child, post-1980, was made to face the wrath of the tyrannical Chinese state, not to mention that the second child was snatched away from parents and dispatched to anonymity.

Close to 70 per cent of the Chinese military force is comprised of single children, with no siblings. As such, they have been brought up as pampered “little emperors” by parents and grandparents. Having psychological impacts that growing up alone might have, there is a constant fear among strategic quarters in China that the softness of their force would spell a death-knell for the country’s expansionist and belligerent ambitions around all of its borders.

Chinese families are very emotional about their children since there is only one. As such, millions of children grew up believing they were “little emperors”. Studies have shown stark differences between children having siblings in China before 1980, as opposed to those who grew up as the lone child in a family. Furthermore, Chinese society is such that parents and grandparents are highly sceptical of sending their children into the armed forces. The Confucianist view that children must respect and take good care of their parents and ancestors still remains deep-rooted in China. As a result, parents are particularly reluctant to see their children die earlier than they do.

Such children-turned-soldiers, on their part too, have the least interest in dying for the CCP. Therefore, even in the combat field, Chinese soldiers prefer the easier way out, and it usually involves surrendering to the enemy force. Such behaviour is directly attributable to the extremely low morale of Chinese troops.

As mentioned earlier, the Chinese armed forces have not been in a real conflict for decades now. There are hardly any soldiers remaining in the PLA ranks who can say they were a part of a war. Take, for example, China’s immediate neighbour – India. The Indian Army is a highly disciplined force, whose military history dates back to the Saragarhi battle of 1897. It is at a constant state of combat readiness, particularly due to India’s notorious western neighbour – Pakistan. Whether it be internal security operations in the Kashmir valley or the Northeast, the Indian Army is never in a state of rest, as opposed to the PLA, which has to play games on the LAC and the South China Sea in order to keep itself occupied.

What makes matters even worse for China is the fact that it stares at the prospect of having its aircraft carriers never leave the docks in times of conflict. According to a former Japanese Ministry of Defense official, Chinese aircraft carriers will not leave their military ports in conflicts out of fear they might be attacked and sunk.

Chinese soldiers, therefore, are showing a propensity of deserting the proverbial battlefield, even at a time when no war is being fought by China. China faced the same problem last year as well. Chinese soldiers facing India along the effective Indo-Tibetan border, or Line of Actual Control (LAC) witnessed a sinkage in morale, especially during the winter months. To “raise morale”, the CCP made arrangements of “recreational centres” for Chinese soldiers. These centres comprised of gyms, heated swimming pools, hot tubs, libraries, and other facilities.

Chinese soldiers get extremely uncomfortable in the face of adversity and rest assured; this will be the death of the Communist nation.