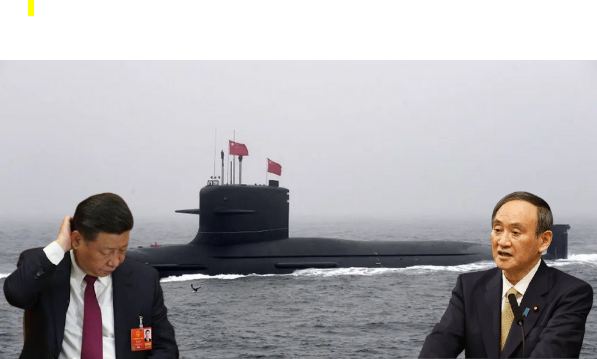 The myth of the Chinese military might stands exposed again- this time in a brief encounter with Japan. On Sunday, the Japanese Defence Ministry reported that a submarine believed to be from China was spotted just outside Japan’s territorial waters near its Southern islands.

As per the Japanese Defence Ministry, Japan’s Navy identified a submarine sailing Northwest just outside territorial waters near Amami Oshima island, part of Kagoshima prefecture, on Friday. A Chinese destroyer was also spotted in the vicinity, and therefore, it is almost clear that the submarine identified by the Japanese Navy was a Chinese submarine.

The main function of a submarine is to sail underwater and avoid getting detected by the adversary for the purpose of espionage in peacetime and offensive operations in wartime. Now, if your submarine gets identified as easily as Japan identified China’s submarine, then the whole purpose of operating a submarine gets defeated because the element of stealth is lost.

The Japanese Defence Ministry statement released on Sunday disclosed that the Chinese vessels were identified in Japan’s contiguous zone, which is outside the territorial waters of a country but where vessels are still required to identify themselves. Having caught China red-handed, Tokyo is getting more vigilant now.

Even last month, China’s vulnerabilities were exposed when the UK’s carrier strike group, consisting of the HMS Queen Elizabeth aircraft carrier, two frigates and submarines was able to catch at least two Chinese submarines spying on the British vessels red-handed. The Chinese submarines and the crew aboard were caught completely unaware and left embarrassed.

As a result, China’s “naval might” was exposed before the entire world. As it turns out, the UK’s carrier strike group could pinpoint and locate the Chinese submarines, because China’s rustic and pathetic little underwater boats were too ‘noisy’.

The Daily Express reported that sonar operators onboard HMS Kent and HMS Richmond, two frigates that form part of HMS Queen Elizabeth’s escort fleet, detected a pair of PLA Navy Type-093 7,000-tonne Shang class submarines, which are armed with cruise missiles, shadowing the carrier group from the South China Sea into the Western Pacific. Operators onboard the frigates, which were working together in a sweep pattern, located the Chinese “stealth” vessels within six hours of leaving the South China Sea.

While China keeps intruding on Japanese territorial waters with pathetic and outdated naval assets, Japan is making rapid progress in its submarine warfare with the Communist nation.

Japan’s submarine size is indeed sufficient to tackle all threats in the East China Sea where Chinese ships often intrude into Japanese waters near the Senkaku Islands.

China may be the largest Navy in the world with around 350 ships and submarines. Yet, no one fears it and despite being accorded special “shooting powers” earlier this year, the Chinese warships and coastguard vessels seem quite harmless

At the end of the day, there is certainly a big difference between the ‘biggest’ and the ‘most powerful’. China operates outdated technology and is hardly capable of taking on Japan if push comes to shove.