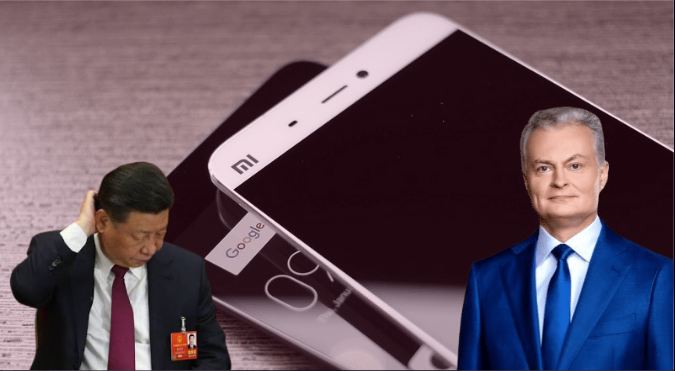 In a major embarrassment for China and its snoopy Chinese Communist Party, the Baltic nation of Lithuania delivered it yet another massive blow, with potential ramifications for China’s smartphone industry worldwide. Defence ministry of Lithuania recommended that consumers avoid buying Chinese mobile phones and advised people to throw away the ones they currently have, after a government report found the devices had built-in censorship capabilities. Concerns have been abounding across the world regarding the security of Chinese phones and electronic products, and how user privacy could, in fact, be gravely impacted for those who use products belonging to Chinese companies.

Reuters reported that flagship phones sold in Europe by China’s smartphone giant Xiaomi Corp have a built-in ability to detect and censor terms such as “Free Tibet”, “Long live Taiwan independence” or “democracy movement”. State-run cybersecurity body of Lithuania said on Tuesday, “Our recommendation is to not buy new Chinese phones, and to get rid of those already purchased as fast as reasonably possible.” The National Cyber Security Centre added that censorship capability in Xiaomi’s Mi 10T 5G phone software had been turned off for the “European Union region”, but can be turned on remotely at any time.

Cyber security body of Lithuania also said that the many Chinese phones like Xiaomi was sending encrypted phone usage data to a server in Singapore. Furthermore, a security flaw was also found in the P40 5G phone manufactured by China’s Huawei. Lithuania says the list of terms and phrases that could be censored by the Xiaomi phone’s system apps, including the default internet browser, currently includes 449 terms in Chinese and is continuously updated.

The last time Taiwan opened a representative office in Europe was in the Slovak capital Bratislava in 2003. Ever since Lithuania okayed the opening of a ‘Taiwan Representative Office’ on its soil, China has been seething with anger. Relations between the two countries have remarkably deteriorated in the past two months. Subsequently, in July, Lithuania announced plans to establish representative offices in Taiwan and several other Asian countries, with a view of increasing its export markets.

Lithuania’s Economic and Innovation Minister Aušrinė Armonaitė hopes to open a Lithuanian trade office in Taiwan in October or November. While Lithuania is enhancing its ties with Taiwan, it is strategically decoupling from China and showing other European countries how the job is to be done. Lithuania withdrew from the 17+1 cooperation mechanism, which includes China and Central and Eastern European countries, in May of this year, stating that it fears the proposal will fracture the European Union.

Prime Minister Narendra Modi’s government is sceptical of Chinese phones brands compromising users’ privacy and safety, and leaking sensitive Indian data to handlers in China who can very well have ties to the Chinese Communist Party. Furthermore, Chinese phones brands were really establishing a monopoly over the Indian market with their dirt-cheap offerings. This was proving to be bad for competition, especially non-Chinese brands.

So, last year, India hiked Goods and Services Tax rates for handsets. This has resulted in Chinese phones being no longer considered ‘cheap’ in India. In the long run, this will affect sales, and lead to Indian consumers preferring non-Chinese brands, since the price difference between them and Chinese brands would be reduced. The cumulative loss, therefore, will be felt by Chinese smartphone brands.

Attack of Lithuania against Chinese phones comes at a precarious time, when the red rogue country is dealing with an unprecedented semiconductor shortage. For China, semiconductors are an indispensable product. The semiconductors are the most essential part of any consumer electronics and technology equipment. China is, however, completely dependent on imports for sustaining its inflating semiconductor demand.

China’s chip fortunes have taken a hit ever since the Trump administration announced that it would “narrowly and strategically target Huawei’s acquisition of semiconductors.” Thereafter, Trump decided to push the envelope and blacklisted the Semiconductor Manufacturing International Corporation (SMIC), China’s largest semiconductor manufacturer. This effectively crippled China’s semiconductor industry. Now, Quad – which together accounts for over 30 per cent of all chipmaking capacity in the world is pushing for the linkage of semiconductor supplies with democratic values. This will end up spelling doom for China and its economy.

As the world realises that Chinese phones are, in fact, tools used by the Chinese Communist Party to snoop over people around the globe, the red rogue country’s economy will suffer further degrowth. Lithuania might just have laid the first brick of China’s tombstone.