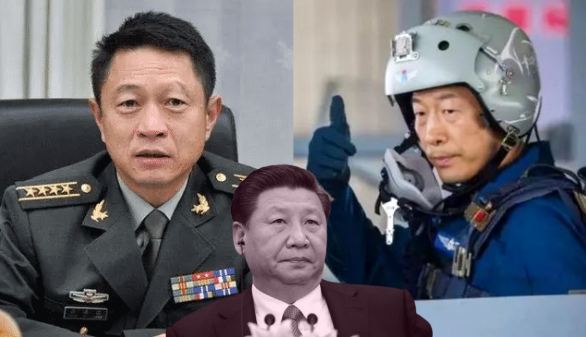 With anti-CCP sentiment rising in China, people growing furious at Xi Jinping and an economy fast going down the drain, the powers-that-be in Beijing have been forced to put their firefighting suits on, and attempt to doze the flames they have themselves given rise to. There is really one power in China, and that is Xi Jinping. Now, as reported by TFI, the chances of Xi Jinping facing a coup soon are high. If not from the People’s Liberation Army, that is the PLA, the Chinese Communist Party might itself revolt against Jinping’s leadership. However, Xi is not done just yet tormenting the people of China. He has his eyes firmly set on yet another term as China’s President.

Yet, Jinping is not oblivious to the imminent threat his reign has come to face not just from within the CCP itself, but from the Chinese populace at large. So, he is now filling the People’s Liberation Army, Navy and Air Force ranks with his topmost lieutenants, who would go to any extent to secure his rule. According to an analysis by the Diplomat, whoever controls the military in China will gain political domination. The CCP, after all, still strongly believes in Mao Zedong’s famous saying: “Political power grows out of the barrel of a gun.”

Xi Jinping is emulating the tactics employed by previous leader Jiang Zemin, who set a precedent by promoting quite a few generals to higher ranks during his remaining days in office. This helped Jiang Zemin keep the Central Military Commission (CMC) under his control even after he was no longer in power.

Who Are the Men Xi Jinping Has Promoted?

China has just got a new Air Force Commander, Chang Dingqiu. He is also an alternate member of the Central Committee of the CCP. Chang had cooperated with the navy multiple times in joint operations between the PLAAF and PLA Navy (PLAN) and had participated in the arrangement of flights and voyages to far seas while being deputy commander of the Southern Theater Command.

Lin Xiangyang is the new Central Theater Command Commander. The Central Theater Command is especially important because it is responsible for the security of the capital city. Its commander must be a general that Xi can trust. Lin belongs to a group of officers called the “Southeastern Corps.” Xi Jinping trusts these men with his life, and has spoken in their admiration many times.

Wang Xiubin has been promoted by Xi Jinping as the new Southern Theater Command Commander. He is a member of the “Southeastern Corps” as well.

Xi Jinping is an insecure little despot. The insecurity of CCP General Secretary Xi Jinping stems from the realisation that his regime is heavily disliked, and that he is himself seen as an oppressive leader who wants to remain in power for as long as he is alive. In recent times, Xi Jinping has found himself clouded by one disaster after the other. Despite indications of discontent within the Chinese PLA veterans, the CCP had so far shied away from openly acting against them. Since the People’s Liberation Army officers and veterans wield wide influence over the CCP machinery, the party desisted from acting against them.

Read more: Jinping is bracing for PLA’s wrath after butchering the economy

It must be remembered that the People’s Liberation Army is the first, and only line of defence in China. So, whenever Xi Jinping gives effect to a new misadventure, whether it be against India, within China, against Taiwan and the larger democratic free world, it is the PLA that has to suffer on an immediate basis. This has led to discontent rising among PLA ranks. From within the PLA, Jinping might face a coup d’état, and to prevent the same, he is now putting in place his lackeys who would keep the situation from boiling over.

As reported by TFI recently, Jinping’s desperation has led to Beijing Police arresting 137 PLA veterans who were protesting against the Military Affairs Departments of China’s various provinces, while demanding that their resettlement issues be resolved. Furthermore, the People’s Liberation Army is currently not undergoing a very patriotic phase. Xi Jinping’s handling of PLA veterans has surely stirred up emotions within the force’s ranks.

As reported by TFI, Xi Jinping has set out on yet another purge spree, and he is targeting the low rung CCP officials and workers now. Investors are fleeing China. The Belt and Road Initiative (BRI) is a colossal failure. Chinese companies are losing their capital and going bankrupt at an unprecedented pace. All in all, the fiscal status of China is not really good. Countries around the world blame China for the devastation caused by the Covid-19 pandemic. Additionally, growing Chinese belligerence and wolf warrior diplomacy seems to be dissuading free and democratic countries from engaging with Beijing.

Therefore, within the CCP, there is bound to be a strong camp that believes that Jinping is doing more harm than good for China. And Xi Jinping, with his latest military appointments, is making sure that he and his rule are secured from those who would rather see him out of office.

The new military appointments also signal growing Chinese preparation to invade Taiwan. Furthermore, Xi Jinping is turning China, particularly Beijing into a fortress ahead of the 20th National Congress scheduled in the autumn of 2022, during which the Chinese President’s future shall be decided.