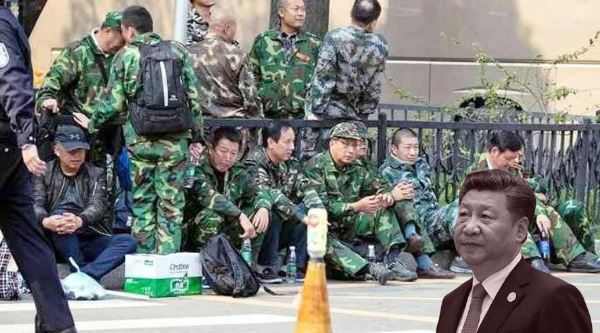 The Chinese Communist Party (CCP) is a brutal organisation and its paranoid General Secretary cracks down on everything under the sun. Over the recent past, a paranoid Xi has cracked down on the tech sector, edutech sector, internet lending companies, video games, private tutors and English teachers.

Despite indications of discontent within the Chinese People’s Liberation Army (PLA) veterans, the CCP has so far shied away from openly acting against them. Since the PLA officers and veterans wield wide influence over the CCP machinery, the Party desisted from acting against them.

However, Jinping’s desperation has led to Beijing Police arresting 137 People’s Liberation Army (PLA) veterans who were protesting against the Military Affairs Departments of the provinces, while demanding that their resettlement issues be resolved.

In China, there are approximately a total of 57 million veterans. These veterans entertain concerns regarding the inability of demobilised troops finding work in government institutions and state-owned businesses in China.

The PLA veterans have been demanding that their resettlement issue be resolved since 2012. However, Chinese provincial officials are known to have ‘intercepted’ such veterans every time they travelled to Beijing to get their concerns resolved. However, this time Jinping is looking to send a tough message to PLA veterans by arresting and publicly cracking down on them.

Jinping’s crackdown on PLA soldiers isn’t really an isolated event. The Chinese President actually fears the PLA. In fact, as a part of the campaign to mark the Communist Party’s 100th anniversary this year, soldiers in the Chinese military were taught about loyalty to the party and its leader, President Xi Jinping.

PLA Major General Li Jun had told a press conference in Beijing that the military must “resolutely listen to Chairman Xi’s command, be accountable to Chairman Xi, let Chairman Xi rest assured.” Clearly, these are signs of a jittery Xi trying to keep the PLA in check and reduce the force into a group of his own henchmen.

Why is the PLA angry with Xi

The PLA has every reason to be angry with Xi and the CCP. Throughout the winter season of 2020, the PLA soldiers were posted in tough and frosty conditions of Eastern Ladakh at India’s border with China-administered Tibet. The PLA troops were posted against a battle-hardened Indian Army without any prior experience of the region or sufficient acclimatization. For several PLA soldiers, the frosty climate of Eastern Ladakh proved too tough to handle.

Xi and the CCP literally have blood on their hands, and they are the ones who got the Chinese soldiers killed for the sake of their salami-slicing tactics. In any case, the PLA isn’t really a disciplined Army, but a demoralized group of insufficiently trained soldiers without any proper military traditions.

To make matters worse, the CCP hid the number of casualties that the PLA suffered during a violent clash with the Indian Army troops at Galwan Valley last year. Xi’s fat ego didn’t allow the PLA to even acknowledge its fallen soldiers.

Xi Jinping has cracked down on the PLA out of sheer paranoia and deep-rooted insecurities. The Chinese President simply wants to muzzle dissent in every form including protests by PLA veterans. However, his actions are only likely to worsen the situation.

No matter how tyrannical a political regime may be, the soldiers and the military are almost invariably respected by every political regime. But such is the desperation and authoritarianism that even the PLA isn’t being spared in China.

The military veterans in China are already dissatisfied due to the lack of pensions, jobs and other benefits, as well mysterious deaths of PLA veterans protesting against such issues. Now, a public crackdown against protesting PLA veterans might prove to be the final straw and ignite a sudden coup by the armed wing of the CCP.