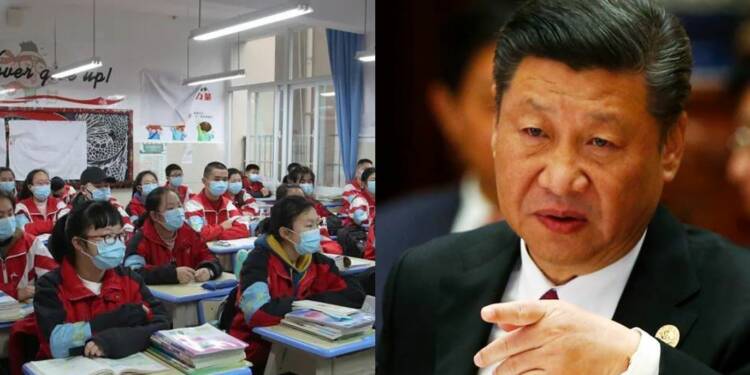 China’s EdTech sector has been hammered down. The hammer and sickle have been brought down heavily on the bustling sector. At the core of China’s rather gigantic and unprecedented crackdown on the EdTech sector is Xi Jinping’s insecurity of losing his grip over the Chinese populace. But the crackdown on private education is rather all-pervasive, apart from being perverse, of course. Xi Jinping has banned private tutoring, and now, he has turned his eyes towards the evisceration of private schools in China. Some Chinese provinces are running pilot projects, under the aegis of which, the operation and upkeep of private schools is becoming virtually impossible.

On September 1, the “Law on the Promotion of Private Education” went into effect in China. The law, signed by Premier Lǐ Kèqiáng after being introduced in April by the State Council, China’s highest administrative body, prohibits foreign ownership of private compulsory education and introduces a raft of policies restricting the profiteering of private schools. Essentially, it turns private schools into not-for-profit entities. Now while that may be oxymoronic for the rest of the world, for how can a private institution function without making profits and raising capital, in China, everything is going as per Xi Jinping’s plan.

According to SupChina, the law restricts how education can be monetized, especially where public assets are involved: Public schools are prohibited from privatizing parts of their business, while private schools, or those registered as non-profits, have tighter oversight on their revenue streams. Additionally, the business and curriculum of private schools must now be in strict line with that of public schools in China. Foreign entities are prevented from holding ownership stakes, adherence to national curriculums will be more strongly enforced, and foreign textbooks are prohibited. Foreign investments have more or less been barred completely.

Read more: Xi Jinping has foreseen his end and is trying to prevent it by destroying every form of private education

Some Chinese provinces, meanwhile, are taking Xi Jinping’s campaign against the private education sector to its logical end. The education department in Sichuan, for instance, issued a notice in June to suspend the approval of new private schools. The SupChina report added that throughout summer, several provinces, including Sichuan and Henan, set a goal to reduce the proportion of private school enrolments to 5 per cent by 2022, given the fact that the national average of the same is close to 10.8 per cent. Effectively, China is looking to squeeze private schools and educational institutions so hard that they find it unfeasible to continue operations, forcing them to shut down, and leading to their students shifting base to public schools.

As of 2020, there were 186,700 private schools in China, accounting for more than one-third of all schools and one-fifth of all students.

Why is Xi Jinping Cracking Down on Private Schools?

The youth in China are not big fans of the Chinese Communist Party (CCP), and many among them have launched a “Do Nothing” movement against the Chinese regime. Others, meanwhile, are promising to remain single and not procreate – a severe setback for the CCP as it desperately attempts to revive China’s declining birth rates.

Private schools in China have not been under the direct control of the Communist state per se. The CCP has not been able to influence decision-making in private schools to an extent it would ideally want to. Furthermore, the curriculum of Chinese private schools is not entirely in sync with the Communist propaganda taught at public schools with the goal of indoctrinating the young and susceptible minds of children.

Therefore, in the long run, students of private schools can pose a threat to Xi Jinping’s reign. Xi Jinping feels that private education and foreign education could create ideological conflict in several parts of China. It could also fuel Hong Kong-style activism in different parts of the Communist nation. By gradually obliterating the private education sector, Jinping is actually following Mao Zedong’s legacy in cementing his rule over China.

Jinping’s Assault on the EdTech Sector

Banking on the Coronavirus driven lockdowns and social distancing measures, the Chinese EdTech sector experienced extraordinary growth and allured some 84,000 new operators last year alone. The technology-driven education stocks bagged investments totalling 106 billion Yuan in the period. Xi Jinping’s latest restrictions on the EdTech sector ban companies that teach school curriculums from making profits, raising capital, or going public. This has shut all doors for these companies to make any form of capital and for investors to get their desired exits.

China’s EdTech sector had the ability to create an entire class of young Chinese people who would have exposure to information which the usual Chinese students, still heavily dependent on traditional modes of teaching would not have. The traditional curriculum in China propagates subservience to the CCP, while the private EdTech sector did not really fulfil this objective. Therefore, the sickle of the CCP has been used to clip the sector’s wings.

A new cultural revolution is underway in China. Jinping is aware of the fact that he can control the minds of China’s future generations if he controls their education and the environment in which it is imparted. Therefore, he is going all out to destroy China’s private education sector, and private schools are the latest casualty of the same.