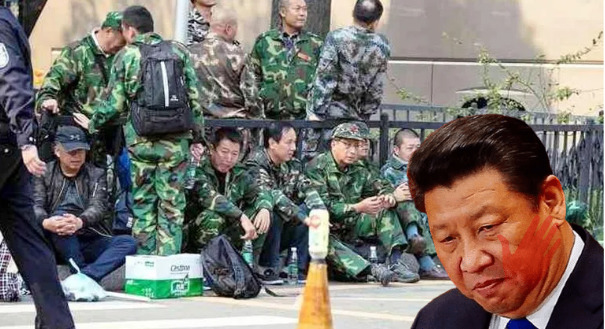 China’s supreme leader, Xi Jinping has been needling his Peoples Liberation Army just too much. For years now, the PLA has been silently submitting to Jinping’s diktats. However, the overall economic deterioration of China and the fall of large businesses, apart from the emergence of economic scandals is painting a very grim picture of China. The Communist nation has been hiking its defence budget aggressively over the past few years, as Xi Jinping embarks on a global domination programme. However, with a crunching economy and a general atmosphere of oppression pervading all walks of Chinese life, it seems to be getting increasingly difficult for Jinping to quell the rebellion.

Despite indications of discontent within the Chinese People’s Liberation Army (PLA) veterans, the CCP has so far shied away from openly acting against them. Since the PLA officers and veterans wield wide influence over the CCP machinery, the Party desisted from acting against them. However, as reported by TFI recently, Jinping’s desperation has led to Beijing Police arresting 137 People’s Liberation Army (PLA) veterans who were protesting against the Military Affairs Departments of China’s various provinces, while demanding that their resettlement issues be resolved. This comes as a first in China. Military veterans have so far been accorded a long leash, but Jinping seems to have finally decided to crack down on them as well.

Economy Down, Hostilities Up

China’s fiscal health is deteriorating. A wide-ranging crackdown on all forms of private businesses and enterprises in China promises to soon effectuate grave damage to the economy of the Communist nation – which has always been inflated by the CCP in any case. Xi Jinping is cracking down on everything that even remotely suggests a spirit of rebellion against the CCP. The Tech sector, EdTech sector, video gaming sector, private education, fintech sector, karaoke bars – you name it, and Jinping has cracked down on it.

It is simply impossible for China to escape the economic repercussions of the same. Meanwhile, China is running out of coal, and a crisis is looming large over the Communist nation. Even as China braces itself for tumultuous economic times, Xi Jinping is refusing to ease conflicts all around the country’s neighbourhood. Taiwan, India, ASEAN, Australia, Japan-China is seeking conflict with them all. However, can China sustain a multifrontal war? The answer is no. With an economy well on the path to a drain, China will find it increasingly difficult to fund its belligerent military campaigns across the Indo Pacific.

China has been hiking its defence budgets successively over the past few years. China increased its 2021 defence budget by 6.8 per cent to 1.35 trillion yuan ($209 billion). Given China’s current economic position, it would be interesting to see whether the country can keep increasing defence budgets on a similar, or greater scale. Soon enough, it is entirely possible, China may have to resort to defence budget cuts, and that will leave the PLA in an even more aggravatedly precarious situation than it already is in.

The PLA is an inept force, and without massive spending by the Chinese state on it, the private CCP militia will simply not be able to secure China’s frontiers. Furthermore, the PLA is currently not undergoing a very patriotic phase. Xi Jinping’s handling of PLA veterans has surely stirred up emotions within the force’s ranks. It must be remembered that the PLA did not always rely only on the CCP for finances. Until 2016-17, the PLA made a fortune out of its involvement in commercial activities across China.

However, Xi Jinping put a complete stop to all of PLA’s commercial activities, thus leading to the force relying entirely on the CCP for funds. Both the PLA and its rather dreaded counterpart, the paramilitary People’s Armed Police (PAP), enriched themselves and their power brokers with Party-sanctioned financial ownership and participation in everything from arms, satellites, and telecommunications equipment to hospitals, consumer goods, mining, karaoke bars with escort services and the kind. By 2018, Xi Jinping ordered the PLA to stop running kindergartens and other businesses and focus on fighting alone. Xi, who heads the party’s Central Military Commission, said his order allowed for “no exception, discount or makeshift compromise.”

Thus, the PLA’s rather exuberant passive income sources were crushed. Ever since Xi Jinping has not been a favourite of the Chinese military. Now, with an uncertain economic trajectory, shrinking fiscal capabilities and the prospect of budget cuts looming large over the PLA, Xi Jinping might be in for a surprise coup.

The PLA will, moving ahead, be exposed to more threats. The free world order is in no mood to relent on their anti-CCP campaign, and the threat China faces from the democratic world is now more real than it has ever been. At such a crucial time, if the PLA finds itself in a dearth of resources to fight, it will naturally direct its anger towards the CCP and its leader, Xi Jinping.

A Clash Between the CCP and the PLA

Mistreatment and harassment of veterans is a new low for the CCP. And the PLA is watching. Remember, the CCP exercises power in China with the help of the PLA. If the PLA decides that Xi Jinping is unfit to rule China, and is not catering to their interests, they will shy away from taking him on.

China has already come to face a real-time crisis in its Western Theatre Command (WTC), which is tasked with managing China’s occupied Xinjiang and Tibet provinces, apart from also dealing with India, and most recently, adapting to the rise of a Taliban regime in Afghanistan. Owing to the same, Jinping has been forced to change four Chinese PLA generals commanding the WTC in the past year, and this shows just how pervasive the anti-Beijing sentiment in the Western Theatre Command of the PLA is.

The PLA has been simmering for quite some time now. Xi Jinping might just find himself at the receiving end of a barrel real soon.