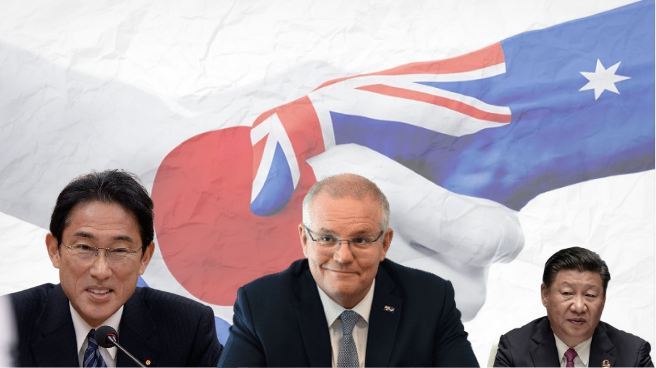 Japan and Australia are coming together openly with one mandate in mind – to cripple China economically. Australia has been at the receiving end of a trade war that has been waged against it by China for getting too nosy in certain sensitive matters for Beijing, such as calls for an independent and open investigation into the origins of Covid-19, and the need to address growing Chinese belligerence across the Indo-Pacific. Since April last year, China has imposed tariffs and other trade barriers and even unofficial restrictions on a range of Australian goods like coal, barley, wine and wheat.

Japan, on its part, is very concerned with rising Chinese belligerence in the East China Sea and against Taiwan. Tokyo fears that a successful Chinese invasion over Taiwan will ultimately end up diverting all of Beijing’s focus to the Senkaku Islands, and perhaps, even more of Japan’s territories like the Okinawa prefecture. So, it only makes sense for both Japan and Australia to come together in order to mount a pushback against Chinese excesses.

The annual Australia-Japan Joint Business Conference which started on Monday with executives from the Japanese and Australian governments and companies such as BHP Billiton, Woodside Energy, Macquarie Capital, Nippon Steel, Electric Power Development, ENEOS, NEC, and Fujitsu is aimed at strengthening commercial ties between the two trading partners as they bond over shared concerns about China’s rise.

According to the Australian Financial Review, Japan contributed $116 billion in foreign direct investment into Australia in 2019. In 2018-19, the two-way goods and services trade was $88.5 billion. Sir Rod Eddington, president of the Australia Japan Business Co-operation Committee (AJBCC), said Australia’s business links with Japan had become twice as important this year because of the geopolitical changes sweeping the region.

He said, “The business-to-business links have been extremely important for a long time, and it is doubly true today. They are also underpinned today on the defence and security fronts. The relationship continues to broaden.”

A major goal of the summit was to brief companies doing business with Japan on how the appointment of Fumio Kishida as Japan’s next prime minister will affect Australia’s second-most important trading relationship after China. The business summit between the two countries, who have emerged as support systems of each other will go a long way in strengthening their respective economies, which China is working overtime in order to hurt.

Japan and Australia have a lot to take away from China. Already, China is struggling with an intense power crisis which is forcing it to shut down entire industries. Having unofficially placed an embargo on Australian coal, China today finds itself reeling under intense stress and power shortage which is directly attributable to Xi Jinping’s larger-than-life ego. When Japan joins Australia with the sole aim of crippling China’s already strained economy, by means of snatching business out of China and creating import alternatives for the world, rest assured, Beijing’s fortunes will meet an insufferable end.

Australian Treasurer Josh Frydenberg recently announced a new trade policy, which he referred to as ‘China Plus’. What Frydenberg has convincingly conveyed to not just Australian businesses, but also China is the fact that the loss in trade with China has largely been compensated by expanded trade with other markets. Exports to China of the goods targeted by Beijing have fallen by about $5.4 billion over the year to the June quarter, but increased to the rest of the world by $4.4 billion.

Now, in order to sustain its ‘China Plus’ trade strategy, Australia requires Japan. And Tokyo, irrespective of who comes to power, is very eager to help Canberra in its time of need, while also benefitting itself from the trade relationship which has found renewed vigour in recent times. It is really a win-win situation for both Japan and Australia. The only casualty here is China, which has been left with no choice apart from retiring to a corner and licking its wounds.

Read More :China out, Taiwan almost in: Japan and Australia are running TPP like a boss