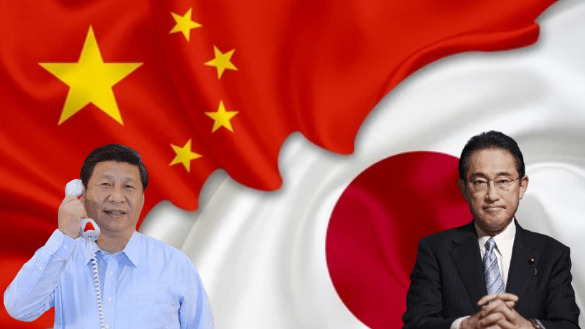 China is facing one embarrassment after the other. All throughout September, Xi Jinping was publicly thrashed by Indian Prime Minister Narendra Modi and Russian President Vladimir Putin at the Shanghai Cooperation Organisation (SCO) summit and BRICS summit. Now, Japan’s new Prime Minister, Fumio Kishida in a phone call with the Chinese president made it clear that Japan will not stop thrashing China only for the sake of pleasing it, and will always say what needs to be said. He was referring to China’s brutal crackdown in Hong Kong, the oppression of Uighur Muslims and the constant Chinese threat which the people of Taiwan face.

Beijing urged Tokyo to “properly” manage their differences in the first phone conversation between Chinese President Xi Jinping and new Japanese Prime Minister Fumio Kishida. Xi pointed to the “challenges and opportunities” in the relationship, and also said stable ties between China and Japan would benefit the region. Xi Jinping said the two nations should “properly handle major and sensitive issues” such as grievances over the history of World War II and Taiwan, while adding, “We must fully implement the political consensus of mutual cooperation partners and not pose threats to each other.”

Given Xi Jinping’s subtle warnings to Fumio Kishida, one might have thought that the new Japanese prime minister, relatively inexperienced in dealing with a bully like Jinping, would cave in. However, that is not what happened. The South China Morning Post reported that Kishida said maintaining stable bilateral relations was important for the region and the international community, but Japan would “say what needs to be said” regarding China’s perceived shortcomings in upholding human rights and the rule of law.

During his 30-minute conversation with Jinping, Kishida told reporters he raised issues of concern, including the Senkaku Islands, Beijing’s crackdown on pro-democracy protests in Hong Kong and the treatment of the Muslim Uyghur minority in Xinjiang. He also conveyed Japan’s stance on Taiwan to Xi, according to a senior official at the Foreign Ministry quoted by Kyodo News.

Read more: Every Japanese PM candidate was a China hawk. Kishida, the biggest hawk among them is now the Prime Minister

Despite being called out by Kishida for his oppressive and brutal domestic policies, an embarrassed Xi Jinping seems to have not responded in kind to the new Japanese prime minister, and instead, is learnt to have continually pitched for enhanced ties between the two countries.

Kishida, who succeeds Yoshihide Suga is an even more pronounced China hawk, and even before he took over the reins of Japan, was breathing fire down Beijing’s neck. Kishida supports a parliamentary resolution denouncing China’s persecution of the Uyghur minority and wants to appoint a prime ministerial aide to monitor the situation. Kishida believes that Japan, in collaboration with the US and other like-minded countries, should stand hard against authoritarian regimes, particularly against China’s growing aggression. Kishida intends to strengthen the Japanese coast guard’s capabilities, as Japan and China continue to remain at odds over the sovereignty of a collection of small East China Sea islets.

Kishida, in an interview given just before Prime Minister Yoshihide Suga’s surprise announcement that he was stepping down, said that Japan should seek to cooperate with Taiwan and countries that share its values of freedom, democracy, and the rule of law.

Most recently, Prime Minister Fumio Kishida made known plans to create a new ministerial post for economic security in a veiled counter to brazen technology theft by China. Technology theft by China has been a burning issue for Japan, and in recent times, Tokyo has taken a number of steps to prevent the same. China’s tech theft has also resulted in Beijing losing all scope of rapprochement with Japan. It was not immediately known who will take up the new ministerial post for economic security, but the new minister is expected to craft a national strategy designed to block a technology drain from the country.

In September, Prime Minister Modi took to subtly telling countries about the shoddy nature of Beijing’s infrastructure development projects like the Belt and Road Initiative (BRI). He declared, “No connectivity initiative can be a one-way project.” The Indian Prime Minister added, “To ensure mutual trust, connectivity projects should be consultative, transparent and participatory. There should be respect for the territorial integrity of all countries.” For Prime Minister Modi to make it clear that all connectivity and infrastructure projects should respect the territorial integrity of host nations was indeed a tight slap on China’s face.

Meanwhile, in a stern dressing down for China, Russian President Vladimir Putin, while addressing the SCO summit last month, said that the body needs a commonly agreed stance over Afghanistan, in the backdrop of the Taliban running over the war-torn country. This came as a huge setback for China, which has been pushing for the Taliban to be accepted by countries around the world as the legitimate government of Afghanistan. Putin also subtly said that the Taliban is not the sole stakeholder of Afghanistan.

Like Prime Minister Modi, Vladimir Putin also took a dig at China during the BRICS summit. Addressing the 15th anniversary of BRICS virtually, the Russian President said, “We are all for Afghans living in peace.” He added, “We have to ensure non-interference into the internal affairs and respect their sovereignty.

In the latest public humiliation for him, Xi Jinping has been shown his place by Japan’s Prime Minister, Fumio Kishida. Given China behaviour, Jinping should brace himself for being repeatedly thrashed at international forums, and during personal calls with world leaders.