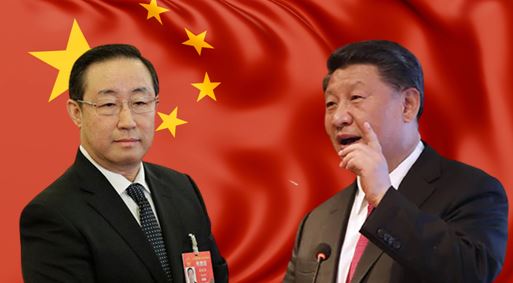 In his attempts to secure his rule, Chinese President Xi Jinping seems to have opened a can of worms which he would rather want shut and thrown perhaps into the East China Sea. It’s almost like Jinping is no longer in control of himself. He is acting recklessly – and Jinping is not a man who is known to be reckless. His latest actions, however, prove that the CCP General Secretary does not have a thing in control, and he is merely firefighting emergent situations without actually thinking about the consequences of his actions. The crackdown on Fu Zhenghua, deputy director of the social and legal affairs committee of the Chinese People’s Political Consultative Conference (CPPCC) is the latest, and most significant example.

Also read: Jinping cracks down on loyalists too as coup fears worsen

The Central Commission for Discipline Inspection, which is the Chinese Communist Party‘s top anti-graft body, announced that former Justice Minister Fu Zhenghua has been placed under investigation on suspicion of “serious disciplinary violations.” Let’s just say, coming down hard on someone like Fu is no ordinary happening. It is unprecedented, and has inevitably sent shockwaves across Chinese polity. Fu Zhenghua – the tallest secret keeper of Xi Jinping falling from the supreme leader’s grace has shown every single person in China that nobody is safe from Jinping.

But Xi Jinping seems to have made a mistake this time. He has stretched his luck too far, and messed with the wrong guy. At a time when Jinping’s life is under threat and the man has enemies all around him, making a foe out of someone like Fu Zhenghua will perhaps be the Chinese President’s worst decision.

Who is Fu Zhenghua?

Fu Zhenghua has been Xi Jinping’s loyalist for the past decade. Before taking up his post at the CPPCC, Fu Zhenghua had served as justice minister and deputy police chief for the Beijing municipal police department. As chief of Beijing’s police, Fu led an intense crackdown on the city’s sex industry, which paved the way for his promotion as executive vice-minister for public security. The illegal sex industry which Fu Zhenghua busted was said to have influential political connections.

In 2013, Xi appointed him to spearhead a graft probe into Zhou Yongkang, China’s former security tzar and retired member of the Politburo Standing Committee. As the deputy minister of public security, in 2013, he unleashed a sweeping crackdown on opinion leaders and influencers on Chinese social media. In the same year, the trusted lieutenant of Jinping rounded up human rights lawyers and activists from across China. Fu Zhenghua was also behind the persecution of peaceful critics of the CCP, and of members of the banned spiritual movement – Falun Gong.

Fu is a man who knows too much. He knows Xi Jinping better than Jinping perhaps knows himself. At any given moment, if there is one man in China who can guess what Jinping’s next move would be, it is Fu Zhenghua. When he was serving as Beijing’s public security bureau chief, he was tapped as vice minister at the Ministry of Public Security, which oversees police organizations across the country.

Xi Jinping had Fu lead the anti-corruption campaign, and it is this campaign which became the source of Jinping’s power. Xi’s rise to power was no path of roses. In fact, it involved intense powerplays and rivalries. How Xi Jinping grabbed power within the CCP is known to Fu. The man knows all of Xi Jinping’s strategies, plots and perhaps, even crimes.

Could Xi Jinping Be Sent to the Gallows by Fu?

According to Nikkei Asia, nobody knows more of the secrets behind the big incidents that have rocked Chinese politics in recent years than Fu. According to a CCP source quoted by Nikkei Asia, “My impression was that he was a technocrat who started with case investigations and rose through the ranks. But this is a case of a man who knew too much. He was forced to leave, in quite a ruthless manner. Now, anything could happen.”

People within the CCP now know that Xi Jinping has thrown a punch way above his weight, and that his castle might just come crumbling down now. Fu knows Xi Jinping like nobody else. He knows the dirty tricks Xi played to come to power. Jinping is not a clean man. And if Xi Jinping’s many secrets were to come out, rest assured, his career as an insecure despot would be over, and he would spend the rest of his life either in prison, or in a grave.

Read more: The CCP foils an attempt on Xi’s life as power struggle intensifies within the party

Xi Jinping has many enemies – most prominent of which are leaders from the Shanghai and Jiang-Zeng faction. Reported by TFI, there has been an attempt on Jinping’s life, and Fu Zhenghua seems to have been a part of the plot to kill the Chinese President. Now, if Fu is willing to go to that extent, one can only imagine what else he might do to destroy Xi Jinping.

Already, there is an open power struggle which has ensued within the CCP. Xi Jinping’s chances of securing another term for himself as the Chinese president are shaky at best. In such a time, if Jinping’s secrets were to come out of the closet, one can only imagine what a blow it would deal to his political ambitions. The CCP would get all the ammunition it needs to chuck Jinping out of power, and rest assured, it will make full use of the opportunity.