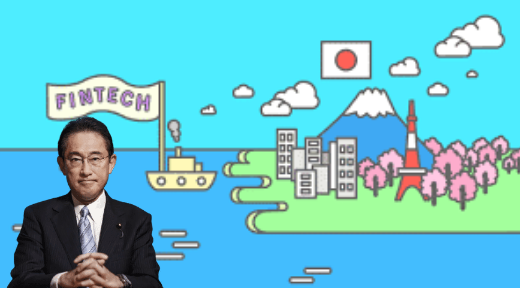 The real sleeping dragon is waking up the ever-increasing belligerence of their neighbours in Beijing. The new Japanese Prime Minister Fumio Kishida has taken it upon himself to expedite the process of streamlining the economy, that his predecessors tried in their capacities. Japan is seeing an increase in financial technology companies (FinTech sector) as a result of a combination of regulatory and banking industry measures, raising optimism that the world’s third-largest economy may finally catch up with the global finance boom.


PM Fumio Kishida has taken it upon himself to make the market lucrative for investors and companies to invest in Japan and its economic future. As one of the early yet significant steps, companies will now be able to sell a variety of financial goods banking, securities, and insurance under a single financial services brokerage licence, according to a revised law slated to take effect in November. Consumers will be able to access such things more easily through a smartphone app as a result of this, while previously, businesses had to seek separate permits for each of their services.

The FDI problem of Japan

Inward foreign direct investment (IFDI) is a term used to describe when a country encourages foreign corporations to build up new facilities or purchase domestic enterprises to boost growth (FDI). Be it China, or recently India as well, whose Forex Reserves surged from $16.66 billion to a record high of $633.558 billion, however, Japan is an exception that has time and again resisted the inward FDI. The United Nations Conference on Trade and Development (UNCTAD) ranked 196 nations in terms of cumulative inward FDI as a proportion of GDP in 2019 (the most recent statistics available). Japan finished dead last, slightly ahead of North Korea.

According to evidence from other countries, a rise in FDI might significantly boost Japan’s economic growth. The countries that benefit the most from increased FDI are those that are the least efficient in comparison to global standards. Yes, Japan excels in a few fields, for example, the automotive industry, but it lags in some others.

When one business management institution assessed 64 countries based on how much economic gain they received from their digitization investments, Japan came in dead last.

Japan’s economic opening up, and the FinTech sector

According to Takashi Okita, chairman of Japan’s Fintech Association and founder of startup Nudge, the policy reform signifies a “significant revolution.” “Companies were only authorised to act as sellers’ representatives. Companies are now acting as buyers’ agents, selecting the greatest things on their behalf.”

Okita said it plans to use the new licence framework to expand its product portfolio in the future. This year, the company raised 1 billion yen ($8.8 million) from a group of investors, including Insignia Ventures Partners, a Singapore-based venture capital firm that made its first investment in Japan. As reported by Asia Nikkie, 400F, a matching platform for customers and financial professionals, and SmartBank, which offers an app and prepaid cards to assist people to manage their spending, are among the fintech businesses that have received seed funding.

The new wave of Japanese FinTech sector comes as their counterparts in other markets have seen their valuations rocket due to increased investor interest during the coronavirus pandemic. According to CB Insights, global FinTech funding hit $91.5 billion in the first nine months of this year, nearly doubling the previous year’s number of $47.2 billion.

While these steps will not only increase the inflow of FDI but will also give a much-needed headstart to the FinTech sector. The Japanese economy seems to be going in a good direction, and the FinTech sector is just the first project. Another keenly awaited legislative change is allowing FinTechs to participate in payroll by allowing employers to pay employees directly to their e-wallets. It can shift money from banks to FinTechs and attract millions of new users if it is approved. Regulators are debating the proposal, but sources claim labour unions in the banking industry are opposing it.