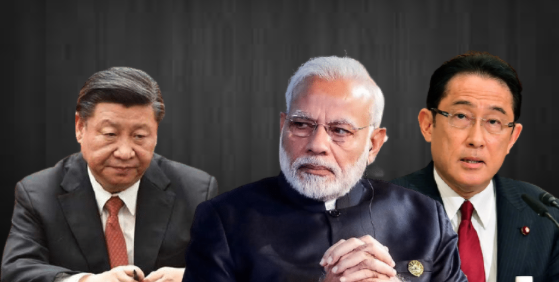 Chinese hegemony has four main enemies in the world today, that is, the Quad allies- India, Australia, Japan and the United States of America. However, it is India and Japan who are directly engaged with the rogue nation. While India is the only country to have exchanged hostilities and shed blood at the border with China. Japan is the only other powerful Quad country that shares direct hostilities with China near the Senkaku Islands in the East China Sea.

As such the kind of political leaders who lead New Delhi and Tokyo matters to Xi Jinping. He wants India and Japan to get dovish but the leaders of the two countries are turning out to be China hawks. India and Japan are looking to uproot Chinese hegemony in association with each other.

Fumio Kishida- a hawk from a dovish faction

Fumio Kishida took over as Japan’s Prime Minister earlier this month. Japan is now set to go to the polls on October 31 and if the ruling centre-right Liberal Democratic Party (LDP) can retain power, then Kishida will continue as the Japanese PM for several years.

Interestingly, Kishida comes from the Kochikai faction which is traditionally dovish. However, Shinzo Abe, the chief strategist orchestrating Kishida’s victory, comes from the Seiwakai faction, which is traditionally hawkish. Abe remains a tall politician in Japan and continues to wield a lot of influence. So, is Kishida a China dove or a China hawk?

Well, Kishida’s recent policies suggest that he is one of the bigger China hawks in the world today. After coming to power, he has taken a slew of decisions against China. Some of the decisions include:

PM Modi has been working against the China-Pakistan alliance since 2014 and after 2017, he has developed personal hatred for the Chinese Communist Party. Under his leadership, India has given a bloody nose to the CCP and its armed wing- the People’s Liberation Army (PLA) several times.

In 2017, the Indian Army stood up to the PLA during a standoff at the Doklam tri-junction at the borders of India, Bhutan and China. The standoff continued for 73 days. Ultimately, the Chinese had to face humiliation and withdraw from the standoff.

For the last one and a half years, India and China have been engaged in a standoff along the de facto Indo-Tibet border in Eastern Ladakh. On June 15 last year, Indian Army and PLA troops clashed in Galwan Valley, which led to China suffering at least 35 casualties.

PM Modi has led the building of a robust road network along the disputed Indo-Tibet (China controlled) border to push back against China. This has allowed the Indian Army to thwart all Chinese attempts to intrude into India’s territory.

Meanwhile, India is hurting China on the economic front too. Last year, India banned around 267 China-based apps on the ground of national security. This year, the Modi government has cracked down on the Chinese smartphones industry which has grabbed a sizeable market share in India.

With hawkish Prime Ministers in both India and Japan, Xi is bound to get some sleepless nights. The two countries have already cooperated on several fronts including launching a trilateral Supply Chain Resilience Initiative (SCRI) to reduce China’s foothold in the global supply chains.

Kishida and Modi want to hurt China at any cost by pushing back against it militarily and also by launching a diplomatic offensive that uproots Beijing from supply chains effectively reducing it into a pariah State at global forums. Modi and Kishida are emerging as two alpha males making Xi’s life difficult.

Will Poland leave the European Union?