African military regimes are chasing China out of Africa 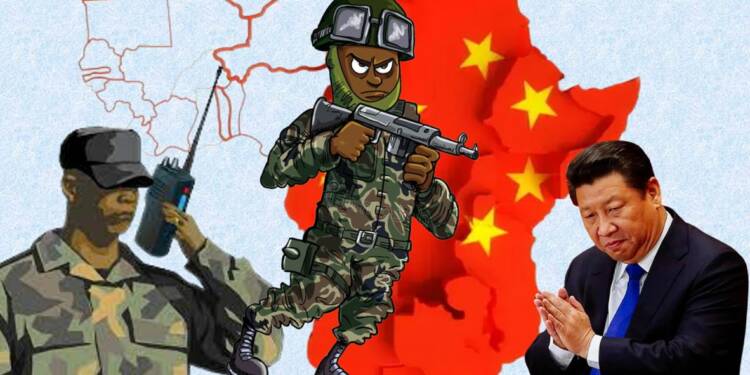 For quite a long time now, China has been behaving like a power that owns Africa and all its resources. Having debt trapped countries, the red rogue nation has been looking to seize control of their strategic assets, with the ultimate goal of establishing bases for itself across the continent. China has been pursuing a neo-colonial agenda for quite some time, but countries of Africa are now coming together to kick China out of the continent. An interesting phenomenon is beginning to make a comeback in Africa. The vast continent is no novice when it comes to military rule and coup d’états. However, there is a resurgence in the number of coups taking place in Africa – at the center of which is a powerplay between China and Russia.

The coup in Sudan came just months after two successful coup d’états in Mali in 2020 and in May 2021. The Malian army, led by Vice President Colonel Assimi Goïta captured interim President Bah Ndaw and the Acting Prime Minister Moctar Ouane. This coup led to the suspension of Mali from the African Union and the Economic Community of West African States (ECOWAS).

The most recent coup attempt which came prior to Sudan was in Guinea. In September this year, the Guinean government, led by the erstwhile President Alpha Conde, was dissolved and replaced by a military junta led by Mamady Doumbouya, the current interim President of Guinea.

The recent spate of military takeovers in Africa began in November 2017, when the then Zimbabwean President Robert Mugabe was placed under house arrest. He was then impeached, and eventually removed as President.

Read more: Coup in Sudan brings Russia and Israel closer, despite US resentment

According to Indian think tank Observer Research Foundation (ORF), the reasons for the coups in Africa appear to be similar every time: allegations of corruption and unviability of the massive resource-for-infrastructure deals. In 2013, a major coup also took place in the landlocked Central African Republic (CAR), when its then president, Francois Bozize, was overthrown by an armed group drawn mainly from the Muslim minority of the country. The coup triggered a bloodbath with the so-called ‘anti-Balakas’, a force drawn mainly from the Christian and animist communities.

China is the main reason for military takeovers:

According to the John Hopkins University School of Advanced International Studies’ China-Africa Research Initiative, between 2000 to 2019, China signed 1,141 loan commitments worth $153 billion with the African government and their state-owned enterprises. Described as resource-for-infrastructure deals, the Chinese RFI agreements in Africa are excluding locals and then there are other concerns like environmental damage and growing public debt. This is leading to a backlash against China’s African resource-for-infrastructure deals.

China uses a lending mechanism called resource-financed infrastructure (RFI) agreements, wherein the recipient government promises to repay the loan for infrastructure development through wealth generated out of a mining project.

There are growing concerns inside Africa that the Chinese resource-for-infrastructure projects do not really benefit the general public and the locals. Resource-rich African nations are waking up to the fact that the Chinese come to their country loot their resources and really don’t leave behind even any short-term benefits for the locals.

It is worthy to be noted here that China usually is able to buy out civilian governments in Africa. Once it co-opts such civilian governments, it loots the country in question without anybody looking over its shoulder. However, the people of the country do indeed get infuriated – which forces the military to take matters into their own hands. Chinese debt traps and investments in Africa have also resulted in a massive upswing in corruption, and coups are mostly effectuated to rid the country of corrupt officials.

Reported by TFI, Africa is only now waking up to the threat posed by China. Countries like the Democratic Republic of Congo, Sierra Leone, Ghana and Kenya have begun cancelling Chinese projects, and Beijing is practically running helter-skelter for cover, as its expansionist dreams get jeopardised by African nations despite it having crushed them under the weight of massive debts.

According to ORF, the coups is Africa are not all a coincidence or a necessity. However, they do end up serving Russia’s larger goals in the region. Russia has been involved discretely in many African coups, and its mercenary groups appear to play a deeper role in countries such as Mali, Libya, and the Central African Republic. It is therefore not surprising that military regimes in Africa end up almost always being supportive of Russia. Moscow is actually playing a strategic game against China in Africa. For China to get heavily involved in Africa does not bode well for Russia’s larger interests. Russia is keenly invested in Africa, since the continent provides Moscow with a large alternative to undercut the influence of western sanctions on it. Therefore, Vladimir Putin is not willing to cede any space to Xi Jinping in China.

Countries in Africa seem to have found the perfect antidote to China. Wherever China has significant interests, a military regime is popping up at the behest of Russia which undoes all the favours forwarded to China by the civilian government. China finds itself in a real soup now, as its African dreams stand in jeopardy.