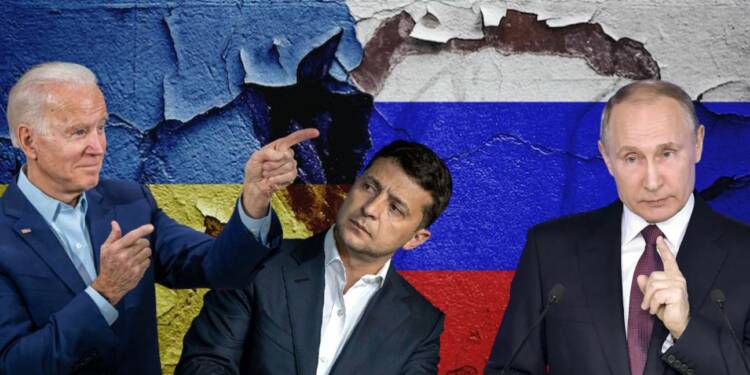 Ukraine has learnt its lesson. Earlier this year, Joe Biden was well on the path of stoking a war in Eastern Europe, with Ukraine and Russia at the centre of it all. Now, with Biden’s approval ratings plummeting and confidence in his administration going down to unprecedented levels, he and the Democrats need a desperate win. The best way for them to consolidate on their Democratic and liberal vote-banks is to initiate a conflict with Russia. Of course, it is not like Washington can suddenly declare war on Russia. So, it is once again back to shooting from the shoulders of Ukraine. Kyiv, however, is not indulging Washington this time around.

The Biden administration has been pushing theories and reports that Russia is once again amassing troops along Ukraine’s eastern border, and preparing for an imminent offensive. Russia, like any self-respecting country, has said that what it does with its own troops and weapons is nobody’s business. It has gone on to say that the claims made by the United States are cheap and of low-quality.

Now, Ukraine itself has come out in the open, and in a massive snub to Biden, declared that Russia is not bringing in additional forces on Kyiv’s eastern borders. Ukraine’s defence ministry said in a statement late Monday that “no additional deployment” of Russian forces had been observed. Instead, it said that the videos “could comprise special informational and psychological actions” and show a planned troop movement after a Russian military exercise.

Ukraine refuses to take the bait:

Ukraine is once bitten, twice shy. Ukraine has been desperately trying to gain the unwavering support of the United States of America, in order to achieve its own geopolitical goals against Russia. Although Joe Biden appears to commit to Ukraine regularly, when it comes to walking the talk, the 46th US President is almost always seen chickening out.

The last time Russia was supposedly on the verge of invading Ukraine, it turned out that Biden was simply using Kyiv as a leverage against Moscow. Back then, he did so to gain the upper hand against Russian President Vladimir Putin right before the duo met for the first time in June this year. After Biden indoctrinated Ukraine to take the plunge against Russia, he abandoned it, to the extent that Biden even refused to meet his Ukrainian counterpart, Volodymyr Zelensky.  Zelensky expressed regret for not being able to meet Joe Biden before the latter’s high-profile meeting with Russian President Vladimir Putin.

Also read: After burning his fingers, Ukraine’s President Zelensky realizes Joe Biden is not to be trusted

As a matter of record, the Biden administration even halted a $100 million military aid package for Ukraine. This was done as some sort of a quid pro quo, after Russia announced it would draw down its own troops from near Ukrainian borders, earlier this year.

Key items under consideration for the package included short-range air defence systems, small arms and more anti-tank weapons. Ukraine would have never thought that the United States would deprive it of a lethal military package, at a time when tensions between Moscow and Kyiv appeared to be soaring. Yet, Biden did just that. Ever since, Kyiv has known that in the larger geostrategic game being played by Washington against Moscow, Ukraine is a mere pawn, which is why it has now refused to toe the U.S.’ line against Russia.

Also read: After pushing Ukraine towards the edge against Russia, Biden has left it hanging and Ukraine has crawled back to Putin

To add insult to injury, after instigating Kyiv to heighten tensions with Moscow, which led to a Russian troop build-up on the eastern border of Ukraine, the Biden administration chose to remove a large chunk of sanctions on the Nord Stream 2 gas pipeline and the company building it – Nord Stream 2 AG. It must be mentioned that the Nord Stream 2 pipeline completely bypasses Ukraine, and gives Russia a direct gas supply route to northern Europe.

Ukraine has simply lost all its leverage against Russia. Now, it survives at the mercy of Moscow and Vladimir Putin. With pro-Russia separatist elements creating hell in Ukraine’s eastern region, President Zelensky has come to realise that antagonising Moscow is not a viable option any longer. Joe Biden’s antics, meanwhile, are neither welcome nor appreciated in Ukraine any longer.

After Japan, Australia vows to go to war with China over Taiwan