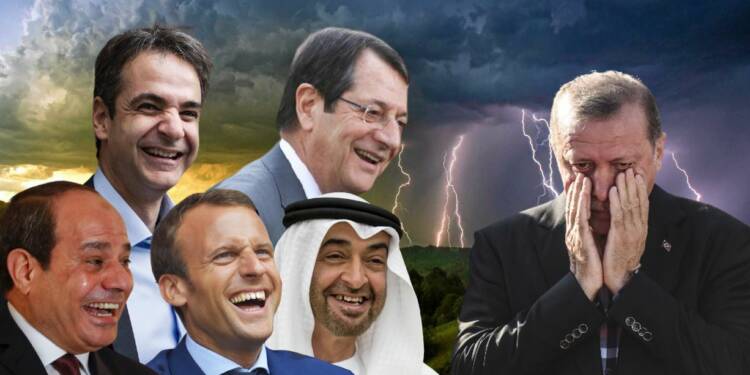 MEDUSA 11 joint naval exercise in the offshore waters of the Greek island of Crete is sending shivers down the spine of Turkey’s President Recep Tayyip Erdoğan. A recent statement made by Hellenic National Defense General Staff revealed that the PASSEX and ADEX training exercises were conducted with the forces of Greece, the UAE (United Arab Emirates), Egypt and Cyprus. The exercise is expected to continue for more than a week with the possible participation of France.

MEDUSA is one of the largest aeronautical cooperation exercises in the Mediterranean that aims to counterbalance Turkey’s military offensive in the region. Interestingly, the exercise is being conducted in the most contentious resource-rich region around Crete, where Turkey also lays its unfounded claims.

Make no mistake, Turkey is the only member state of the United Nations that does not recognise Cyprus, and is one of the few not signatory to the United Nations Convention on the Law of the Sea, which other regional powers have signed and ratified.

Turkey’s offence against its neighbours:

In 2019, Turkey drew vehement criticism from the world when it concluded a Maritime Boundary Treaty with the Libyan Government of National Accord (GNA) to establish an exclusive economic zone (EEZ) in the Mediterranean Sea, which meant that they could claim rights to ocean bed resources. The treaty defied the UNCLOS (United Nations Convention on the Law of the Sea) laws, hence violating the exclusive economic zones of Cyprus and Greece.

Turkey’s definition of the maritime laws:

Turkey claims that no islands, including Cyprus, can have a full 200 nautical mile EEZ authorized to coastal states and should only be entitled to their 12 nautical mile territorial seas. Turkey’s definition creates a dispute over the rights to waters south of Cyprus and the area around Crete containing offshore gas fields. This definition is not shared by most other states, creating myriad disputes in the region.

Turkey has been flexing its muscles in the eastern Mediterranean, as it hopes to soon stumble upon a natural gas gold mine, which would make the country independent of much of its energy imports. Banking upon the military crisis in the Mediterranean Sea, Erdogan wants to shore up his sinking approval rates in the country. However, if Greece-led MEDUSA is any indication, it won’t let Erdogan have his way.

The participation of Egypt and the UAE comes in the face of Turkey attempting to mend its ties with the Arab world. To accelerate its economic growth, Turkey is in dire need of increasing economic engagements with Israel and Arab states. Turkey’s rapprochement with the Arab world also has led Erdogan to initiate a crushing crackdown against anti-Egypt Muslim Brotherhood voices of Turkey.

Also read: Turkey has started dancing to the tunes of the Arabs and Israelis and it’s a good thing for the world

Greece intends to use Arab’s massive leverage over Turkey to its own advantage. Greece, Cyprus and Egypt are already working on a $6 to $7 billion EastMed pipeline project that is expected initially to carry 10 billion cubic meters of gas per year from Israeli and Cypriot waters to the Greek island of Crete, on to the Greek mainland and into Europe’s gas network via Italy. Turkey opposes this deal vehemently, but with the trio of Egypt, UAE and France rallying behind Greece against Turkish belligerence, Erdogan is really having a tough time in dealing with his own-made crisis now.

Turkish aggression against Greece since 2016, especially in the eastern Mediterranean is not an unknown affair. In fact, the issue most recently caught limelight in December 2020, when Turkey withdrew its seismic research ship, the Oruc Reis, from the Mediterranean sea after the EU threatened to impose sanctions on Ankara. The European Union standing in firm support of Greece is just one among the many victories which the nation has scored against Turkey.

Greece has launched a diplomatic onslaught against Turkey. Recep Tayyip Erdogan crossed a threshold in February 2020, when he made Turkey open its land border with Greece, actively transporting Syrian and other refugees and migrants to the Evros River, which separates Greece from Turkey, and encouraging them to cross. The Greeks were convinced after this incident that Erdogan was seeking a conflict with them.

Also read: Turkey’s act of aggression in the Mediterranean was supposed to make Greece weak, but it ended up making Greece a formidable force

So, Greece has been working on its alliances with European nations and also building new friendships with mutual countries that have faced the onslaught of Turkish aggression recently. Among the first consequences of Greece’s diplomatic war against Turkey was the launch of the East Mediterranean Gas Forum, which pulled together Cyprus, Egypt, France, Greece, Israel, Italy, Jordan and the Palestinian National Authority. The EU and the United States were made observers, and the UAE was given the position of a candidate member.

The MEDUSA exercise currently underway in the waters of the Mediterranean is a manifestation of this anti-Turkey alliance getting even stronger. With plummeting economy and burgeoning foreign policy crisis, Turkey is all set to get a drubbing of its lifetime at the hands of the great powers, sooner than later.