The Syrian war is over. And the biggest sign of it is here 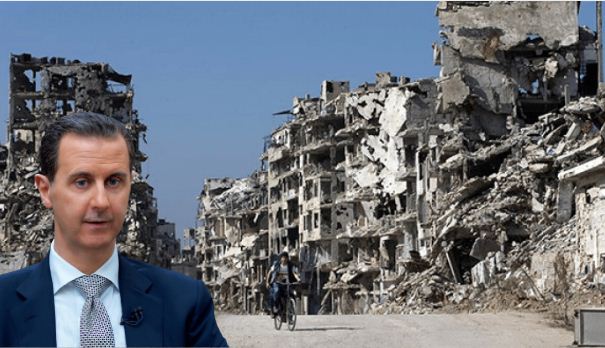 Syria’s Bashar al-Assad has emerged as a giant slayer. He has withstood a regime change war mounted by the United States and its allies. Belonging to the Shia Alawi minority sect in Syria, Bashar al-Assad is an ophthalmologist. During the Arab Spring demonstrations triggered by the then Obama administration of the United States, Sunni Muslims and the Muslim Brotherhood had mounted an aggressive onslaught on Assad’s regime – pushing the country into a massive humanitarian crisis that lingers on to this day. Assad was depicted as the evil-incarnate. He was shown as a mass murderer, human rights abuser and a man who had no right to remain in power.

Ten years later, Bashar al-Assad’s regime in Syria has remained unscathed. Now, the Syrian civil war is coming to an end. Bashar al-Assad is currently in control of most of Syria. With Russian backing, Assad has withstood what was the most aggressive regime change effort mounted by the United States on any country in recent times. Syria is now focussing on being accepted by the world, but first, it must make several goodwill gestures. The Arab world is ready to accept Syria and to grab the attention of the world community, Assad has been making overtures to Jews and Israel.

In the 1950s, there were about 30,000 Jews in Syria, but most left between 1967 to 1973. Today, there are about 40 left within Syria. Most Syrian Jews, close to 75,000 of them, reside in the United States. And Bashar al-Assad is trying to win them back, and possibly, get them to return to their country in what is an unprecedented initiative on the part of the Syrian regime. The Syrian government allowed six Jewish women and six men, who left Syria decades ago and live in New York, to visit Damascus in early November.

One of the visitors quoted by AL-Monitor said that the Jews wanted to learn more about the synagogues in Damascus, Aleppo, and Qamishli, and to see if it is possible to restore the synagogue in the Jobar area. The visitor added, “We agreed to visit after the regime pledged to provide us with full protection at all times. We also visited three Syrian Jews who had not emigrated.”

Syria Trying to Win Over Jews and Israel

Bashar al-Assad wants the war to end. He wants Syria to be accepted by the world community. However, it is of utmost importance for Syria to win over Jews and Israel if it is to gain acceptance around the world. In the U.S., there is a very strong Jewish lobby that drives decision making in one direction or the other, and if Syria is not in the good books of this lobby, it will find it extremely difficult to make any progress in its goal to be accepted by the world.

Read more: Arab world is embracing Bashar-Al-Assad. And it’s Russia that’s making them do so

And then, Syria shares a border with Israel. If Damascus does not have good ties with Tel Aviv, Syria will never really be able to get out of the war it was pushed into a decade ago. This is why Bashar al-Assad has snubbed Iran and conveyed to Israel his enthusiasm to work together. Under the instructions of Bashar al-Assad, Syria had recently shunned the topmost commander of Iran’s Quds Force in the country, after he almost caused an “unwanted regional war” with Israel.

Jordan, Saudi Arabia, Egypt, United Arab Emirates, Bahrain, Oman and other countries are willing to accept Syria. As reported by TFI, Syria could very well be re-joining the Arab League soon, as it has the tacit approval of Riyadh to do so. A regime change war, international propaganda, local militias and the Arab Spring – Assad has survived it all. Today, Arab countries are defying U.S.’ diktats by engaging with Syria. The war in Syria is surely drawing to a close.