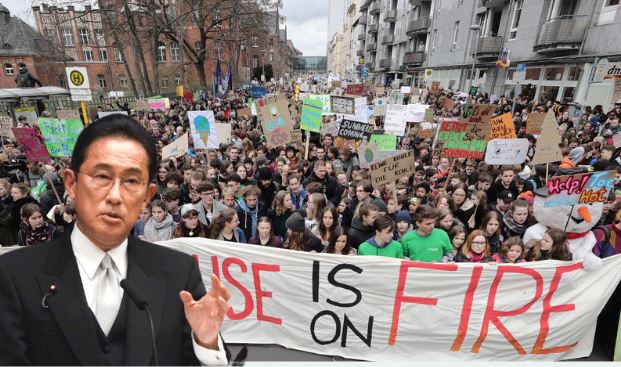 Recently, at the COP26 climate summit in Glasgow, the world made some bombastic and large-hearted commitments to the cause of inhibiting climate change. The developed world has been harassing developing nations in the name of a supposed climate crisis for quite some time now. These countries – like the United States, United Kingdom, France, Germany, Canada and others have been placing themselves on a high pedestal and sermonising developing second and third-world countries about the need to decarbonise and become net-zero emitters of greenhouse gases. However, Japan is willing to have none of this, and it has set out on an independent path – suitable to its own realities, to tackle climate change.

Japan’s new Prime Minister, Fumio Kishida is not a man you mess with. So, world leaders made sure of not stepping on his toes at the Glasgow climate summit. Instead, they allowed him to set his own agenda. Kishida is a proponent of a “new capitalism”, and he is solidly backed by the business and industrial community of Japan. Japan is still developing, and the message from Tokyo is clear – we will not sacrifice our progress at the altar of climate change.

At the COP26 climate summit, Japan was not among the 46 countries that pledged to phase out coal by the 2040s. Also, according to the Diplomat, Japanese carmakers, such as Toyota, were not included on the list of automotive companies that signed a communique in Glasgow to say they are committed to phasing out the production of fossil-fuel vehicles around the world by 2040. Essentially, Kishida was careful not to promise actions that could be deemed as overambitious by the business lobby.

Furthermore, Japan is also among some of the countries which forced the final communique of the summit to be watered down. In the context of coal usage, instead of the words “phase out”, Japan ensured that the communique stated, “phase down”. Japan, which gets about 30 percent of its power from coal, plans to cut this to less than 20 percent by 2030, but has no timeline for dropping it entirely.

Kishida’s Message to Rabid Climate Anarchists is Loud and Clear

Fumio Kishida has made it abundantly clear to all rabid climate anarchists that Japan will not sacrifice its development for the cause of preventing climate change – which is a phenomenon whose responsibility lies solely with the developed world. While the developing countries are still in the process of achieving the full effect of their respective industrial revolutions, developed nations have burnt their fair share of fossil fuel back in the 1700s and 1800s during their economic revolutions. The same is yet to happen in the developing world.

To uplift the countries out of poverty, they need developmental work, which comes at the cost of pollution, at least till the time sustainable practices become affordable or the developed nations pool in to make it sustainable. Japan has taken steps that are in line with its own growth trajectory. For example, Japan joined more than 100 countries that promised to stop deforestation by 2030. The Japanese delegation also agreed to comply with a scheme to cut 30 percent of methane emissions by 2030. Tokyo also pledged up to $10 billion in funds over five years to assist Asia along the path to zero carbon emissions.

Japan has carved an independent path for itself. Fumio Kishida is a man who is rightfully placing his countries business and developmental interests at the forefront, and the remainder of the developing world has much to learn from Japan.