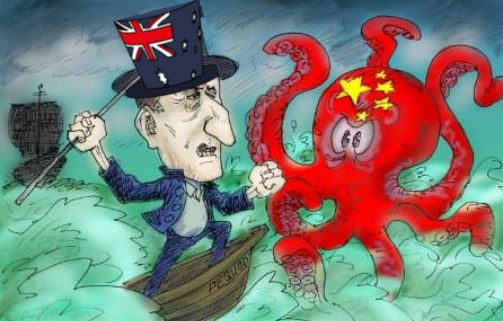 Until 2019, India was the only Indian Ocean power that kept an increasingly belligerent China in check. Mind you, the Indian Ocean is to India what Central Asia is to Russia. It is India’s sphere of influence. And while India does not break a sweat when democratic countries help nations in the Indian Ocean in their development, New Delhi certainly does not entertain China trying to debt-trap countries of the region. Whether it be the Hambantota Port fiasco or China trying to encircle India in the Indian Ocean under its “string of pearls” strategy, New Delhi has effectively countered Beijing every step of the way. However, it would certainly help India’s cause if another powerful country could become an active participant in the geopolitical game underway in the Indian Ocean.

India has now found a partner to challenge China in the Indian Ocean. And this partner is Australia. Before 2019, ties between Australia and China were somewhat amicable, although Beijing was trying to eat into Canberra with its BRI projects in and around Australia. In a post-Covid world, however, Australia has emerged as one of the most pronounced China hawks. Australia’s rise as a power that is always ready to take on China has forced Beijing to divert much of its attention and resources down under, and therefore, China’s Indian Ocean dreams have ended up taking a hit.

China has been trying to intimidate Australia. Under Prime Minister Scot Morrison’s leadership, however, Australia is turning the tables right back at the CCP. Recently, Scott Morrison mentioned that a Chinese ‘spy ship’ spotted off the Australian coast had every right to be in international waters, but this acceptance came with a daring caveat.

The People’s Liberation Army Navy ship sailed from waters off Darwin hugging the coastline and headed as far south as Sydney for about three weeks earlier this year. The ship remained in international waters and did not infringe upon Australian waters. Scot Morrison, therefore, said, “They have every right to be there, under International maritime law, just like we have every right to be in the South China Sea.” He added, “I think the presence of the Chinese Navy, which we were aware of, and they were keeping a close eye on us and we were keeping a close eye on them. The importance of that is to highlight Australians that there is a very serious situation in the Indo-Pacific.”

Surely, China would not have been expecting such a response to its intelligence-gathering mission along the Australian coast. Now, when Aussie ships set sail for the South China Sea, China can do nothing but spectate mutely, and if it tries to mess around – well, it would have another set of consequences to deal with for taking on a QUAD and AUKUS alliance partner.

QUAD, Nuclear Submarines, Hiked Defense Budget and an Aim to Liberate the Indo-Pacific

Australia is a Quad member. So, it is a crucial member of the anti-China front which has recently developed across the world. And then, Canberra is also a member of the AUKUS alliance. As such, it would soon be getting hold of nuclear submarines and cutting-edge weapon systems – and this is a nightmare for China. Australia has also hiked its defence budget for this fiscal year by 4.4% to AUD44.61 billion (USD34.84 billion).

In May, China realized that Australia could prove to be the biggest obstacle in realizing its Taiwan unification dreams after Scott Morrison administration signalled his intent to defend Taiwan in any event of China’s aggression against the democratic island nation. It must be remembered that the security of the Indian Ocean directly impacts the security of Australia. Therefore, unlike previous years, China now has to deal with a resurgent Australia – which is promising to challenge China every step of the way, across the Indo Pacific, of which the Indian Ocean forms a major part.

China’s resources are getting divided across the Indo Pacific, at a time when more and more world powers are descending upon the region to take on Beijing. Australia’s rise as a major anti-China coincides with Russia itself joining the Indian Ocean Rim Association, in a move which is not likely to auger well with Beijing. Led by India and Australia, China will be driven out of the Indo Pacific into its pathetic hole. Already, China has a green-water navy which it resents, once that cannot take on the collective might of QUAD and AUKUS partners, leave alone the democratic world as a whole. Australia has come to play a very significant role when it comes to containing China’s rise in the Indian Ocean.

Biden bullied MBS for about 8 months. And now MBS is taking revenge