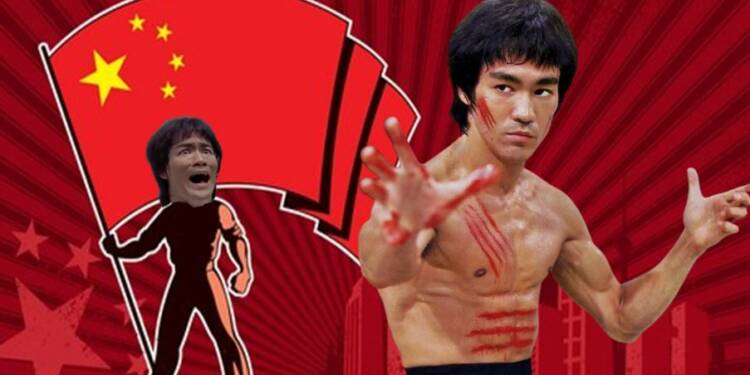 Chinese history is full of humiliations, but the Chinese Communist Party (CCP) only wants to accept the century of humiliation starting with the unequal treaties with the western powers. Almost half of the dynasties which have ruled China have been established by the tribal forces which trampled over the Han civilisation and established their rule.

While the world may be fascinated by Chinese martial history, the fact remains, that these martial arts had lost time and again in front of the nomadic tribes, which goes on to show that they are more entertaining than effective. These historical memories are deeply ingrained into the Chinese psychic, making them a naturally subservient population.

This was a problem for the CCP, which wanted to recruit a proud and confident army in modern times. This is where the myth of the supreme martial artist Bruce Lee came into the picture. It was one of the earliest examples of CCP’s attempt at large scale narrative building. The mystique around Bruce Lee was created to promote the supposed superiority of Chinese martial arts, and thereby instill it in their population pride, notwithstanding if it is true or false, as long as it helped boost the morale.

The sham of Bruce Lee:

Bruce Lee was the only martial artist in the world who rose to the status of god, without ever fighting a single sanctioned bout. While it is easy to stage a trick, real fighting necessitates skill. Mutually agreed bouts are the sure-shot ways of making sure if the flashy Chinese martial arts hold any weight in a real-time brawl. He is the best illustration of how the media can persuade people to believe something and even defend it to the point of being enraged if their beliefs are ever called into question. We’re all aware that Chinese martial arts are cults, which makes any criticism and questioning difficult, and this has been proven from time to time.

The CCP propaganda made sure that the reality is kept hidden, while providing an air of mystique around the image of Bruce Lee in front of common Chinese people. In cases of martial cults in China, the people have been programmed to believe that their “master” is the most powerful person on the planet. This is also true of Lee’s supporters. Lee is a god special among others in their limited imagination. They even believe he can compete against professional fighters of the contemporary era. Some even believe he is capable of defeating the finest MMA fighters. They’re allowing nostalgia and fantasy to get in the way of rational thought.

The proof lies in the origin story of Bodhidharma. As a prince, he lived in South India in the 5th (or 6th) century AD. His siblings plotted against him and deposed him from his reign. This prince subsequently abdicated his throne and became Bodhidharma, a Buddhist monk. For several years, he lived with his guru, who told him to move north and share the word of Buddhism. When Bodhidharma’s instructor died, he duly set out, walking all the way to China. According to mythology, his nephew thoughtfully dispatched forward carrier pigeons, requesting the Chinese people to look after him.

Also read: After the wimps of PLA got their necks snapped by Indians, China sends Martial Arts fighters to Ladakh border

Bodhidharma saw the monks at the Shaolin monastery exhausted from meditation and fasting. He passed onto them the martial arts skills that he had learnt as a young prince: the magnificent art of Kalaripayattu. The famous Shaolin Kung Fu warrior monks were born as a result of this. This is where the origin of Chinese Shaolin Kung Fu can be traced. Similarly, other forms of martial arts too have their origins among the nomadic tribes of Mongolia, as well as Japanese variations of martial arts.

Tarantino’s ‘Once Upon a Time in Hollywood’ calling out the sham of Bruce Lee’s martial superiority:

Quentin Tarantino added his impudent voice to the discussion, when he characterised Lee, played by actor and martial artist Mike Moh, as a vainglorious braggart who gets into a brawl with Brad Pitt’s Cliff Booth, a stuntman and former Green Beret, in Tarantino’s revisionist adventure – ‘Once Upon a Time in Hollywood’ (OUATIH).

Tarantino told on Joe Rogan’s podcast, that Lee wouldn’t have a chance against Booth.

“If Cliff fought Bruce Lee at a Madison Square Garden martial arts tournament, he would not stand a chance,” Tarantino said. “But as a killer who has killed men before in a jungle, he would kill Bruce Lee. He’d f—ing kill him! Bruce Lee is not a killer. He’s facing a guy who could kill him, it’s a different story. It’s in the book when Bruce realizes Cliff is taking a military combat stance, he realizes Cliff is a killer.”

While the point made by Tarantino was well reasoned, the people have been fed with a consistent narrative that makes them blind to all the proof available. The CCP’s hand behind creating the myth of China’s martial supremacy by promoting Bruce Lee is so serious, that anyone who tries to bust the myth gets punished by CCP.

Furthermore, Bruce Lee’s first encounter with Gene LeBell, a two-time national champion judoka and famed Hollywood stuntman who is credited with popularising grappling in North America, is modelled in part on the battle in OUATIH. In 1966, they met on the set of “The Green Hornet”, where LeBell grabbed up the yet-unknown actor, slung him over his shoulders, and carried him around the set in a fireman’s hoist.

In China, the battle for the soul of martial arts is approaching a century. It’s a debate between proponents of traditional tactics, and others who believe that if the arts don’t operate in the real world, they don’t work at all. Xu Xiaodong, 42, is a Mixed Martial Arts (MMA) fighter on a quest to expose ‘false’ martial arts. By challenging Chinese ‘grandmasters’ to fights and then pummeling them to defeat in seconds, Xiaodong earned the moniker ‘Mad Dog’.

Xiaodong takes down the greats of Tai Chi, Wing Chun, and Kung Fu one by one in filmed bouts that go popular on Chinese social media. All of this is part of his myth-busting approach to actual combat, which has left many traditional martial artists in the dust, because techniques that work in theory do not always work in practice.

Also read: China’s power is overrated and Chinese culture is a myth

The explanation is straightforward, and it points to a very real facet of Chinese life: Xiaodong’s social credit score is in the drains. With a ‘D’ classification, Xiaodong is only allowed to travel in second-class trains and flights. He can’t ride bullet trains, which is why it took him 36 hours to get to his most recent fight, where he knocked out a “pressure-point” striking Wing Chun ‘master’ in under a minute, according to an SCMP 2019 report.

The example of Xiaodong gives out a larger trend, that is, anyone who tries to bust the myth of China’s martial superiority will be punished. CCP does not want to lose the narrative which has been built for such a long time and nurtured by the myth of the superior fighting style of Bruce Lee. However, the example of this Chinese MMA fighter who has been vilified by the Chinese troll army as well as CCP, also busts the myth of China’s martial superiority.