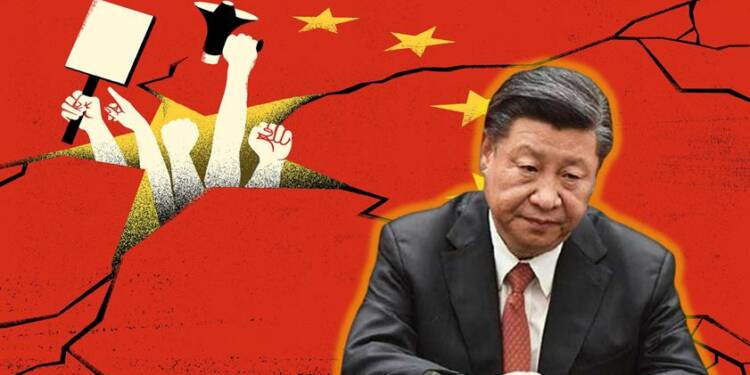 Xi Jinping is living a lie. He is living in delusion. He has surrounded himself in an eco-chamber of sycophants. The Chinese president is out of touch with the realities of his country. A leader needs to keep a hand at the pulse of the nation. The person running a country must know what is happening across the state, how it is happening and what the sentiment on the ground is. People are seething with anger against the Chinese Communist Party (CCP), but Xi Jinping could not care less. He is pursuing his brutal policies and economic warfare on businesses – both domestic and international, with enhanced vigour.

Also read: The CCP foils an attempt on Xi’s life as power struggle intensifies within the party

Why is he doing so? Because he thinks what he is doing is right. He thinks it is in China’s interest. Xi Jinping is a moron – a foolish one at that. He does not realise the irreparable damage he is causing to the country. In any other normal nation, a leader like Xi Jinping would have been thrown out of power. In China, however, nobody has the spine to tell Jinping that what he is doing is catastrophically wrong. To be fair, previous Chinese presidents were not as crazy as Xi Jinping. They had a robust feedback mechanism, which allowed for their faults to be pointed out – even if in private and out of public glare.

Xi Jinping, however, has nearly destroyed that feedback system. It has not been dismantled, mind you. Let me explain the difference here.

In ancient China, Chinese emperors built a sophisticated spy network which made them privy to critical information as soon as possible. The spy network helped many emperors consolidate their rule over China. In 1949, when China fell to the communists, who had a strong sense of anathema for imperial Chinese practices and traditions – the spy and information gathering system metamorphosed into what came to be known as the neican system. The term refers to internal reports compiled by various departments and institutions – as well as major state media outlets – for senior party and government officials’ eyes only.

According to the South China Morning Post, Mao Zedong and Deng Xiaoping relied on the system to keep track of things. On top of reading reports from various government departments, Mao and Deng mainly relied on state media outlets such as Xinhua news agency and the People’s Daily to stay informed. The SCMP analysis also mentioned how the neican system followed a hierarchy, with the senior most leaders of the CCP getting the frankest version of events and feedback.

How Xi Jinping has dismantled the system:

SCMP has come to be controlled by the CCP, since Alibaba – which owns SCMP, is now controlled in a big way by the CCP. So, SCMP will not tell you the full story. But it has left a hint for us. In its report, SCMP’s Wang Xiangwei said, “Nowadays, as the internet and social media platforms have come to dominate people’s lives, the neican system – which can be slow to react to breaking news – has lost some of its allure and exclusiveness.”

Also read: The mysterious high-intensity blasts in China that CCP does not want you to know about

The Xi Jinping regime is consistently making the life of ordinary Chinese citizens miserable. This would not be happening if the CCP General Secretary would be getting authentic reports and feedback from the ground. What the man seems to be receiving is a highly adulterated version of things and events, which makes him believe that whatever he does is welcomed by the people of China. Essentially, the bureaucracy of China, in an attempt to save its own skin, is providing Xi Jinping with false information.

Xi Jinping has been deceived by the CCP and China’s bureaucracy. He is not in touch with reality, which is why he tries to repeatedly strongarm countries around the world with the fragile stick of China’s “economic might”. The economic might of China is fast becoming a thing of the past. China has waged trade wars with Australia and Lithuania. Both these countries have stood up to Beijing and refused to buckle under its pressure. Instead, they have found ways to flourish, despite China’s economic coercion.

Also read: It’s soon going to be all over for Xi Jinping

But nobody is willing to tell Xi Jinping that the world is no longer intimidated by China. They all want their supreme leader to believe that everything is rosy. Foreign companies are already exiting China for several reasons including Xi’s unfriendly policies, tight regulatory measures, the Evergrande crisis, and energy shortage in the communist nation. Several tech companies like Yahoo Inc., Epic Games, and Microsoft, have either exited China or have ended up downsizing their operations in the communist nation.

Moreover, several consumer goods brands like Nike, LG Electronics, Adidas, Puma, Sharp, Kia Motors, and Hyundai Motor Group too have started shifting production out of China for several reasons. In such circumstances, Xi should have been laying the red carpet for foreign firms in a bid to somehow get them to stay in China. However, he is trying to threaten them instead. And why is nobody correcting Jinping? Because the feedback system has been corrupted and undermined. Now, Xi Jinping cannot tell right from wrong, even if his subordinates remain well aware of the catastrophe that the Chinese President is leading China right into. A foolish Xi Jinping has been duped by the neican system of China.