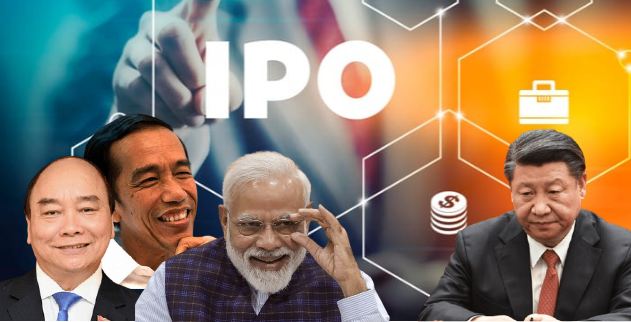 The romance between China and Wall Street is coming to an end. It has been a very expensive romance, worth trillions of dollars. The breakup will have economic ramifications for both China and the United States, since Wall Street was so deeply and madly in love with Chinese companies and the CCP.

Leading the crusade to decouple from Wall Street is Didi Chuxing, a $39 billion company that is China’s answer to Uber. Earlier this month, Didi decided to de-list from the New York Stock Exchange, a move that is designed to earn the goodwill of the CCP. Similarly, Chinese IPOs in the United States are about to sink, which is why U.S. stock exchanges are now turning to Southeast Asia and India.

According to Financial Times, U.S. stock exchanges are pursuing listings from companies in south-east Asia and India to counteract a sudden slowdown in business from China. For a long time, companies from India and Southeast Asia have been nearly absent from U.S. stock exchanges. But that is about to change now, as Xi Jinping destroys one Chinese IPO after the other with his market illiteracy-driven crackdowns.

Tensions between China and the United States have pretty much dried up listings of Chinese companies on American stock exchanges. Those that do get listed face the wrath of the CCP in more ways than one.

This has proven to be a killer for the New York Stock Exchange and Nasdaq stock market, and to compensate for the shortfall, the U.S. is turning to India and Southeast Asian countries.

Bob McCooey, Nasdaq’s Asia-Pacific chair told FT, “We think the entire region is ripe for IPO activity. The pipeline has grown from a handful of companies, if you asked me a year ago, into a few dozen today.” He also said that over time the region could become as big a source of business as China was until recently.

Insurance Group FWD became the latest company to put an end to its flotation plans at the U.S. stock exchanges fearing reprisal by the Chinese Communist Party. Alex Ibrahim, the NYSE’s head of international capital markets, said exchange officials had been “spending a lot of time focused on southeast Asia, more so than in previous years, and I think this will continue”.

The U.S. Stock Exchange executives view India and Indonesia as the biggest areas of opportunity because of their large populations and growth potential, although, as per FT, executives are also expecting an uptick in listings from countries including Vietnam and Malaysia.

Indonesia, meanwhile, has relaxed rules for new listings as the country aims to attract more companies seeking to go public. The Indonesian Stock Exchange’s decision to do so comes in the heels of Western bourses eyeing Southeast Asian businesses for overseas listings.

Read more: The Trillion Dollar love affair between China and Wall Street comes to an end

By foraying into the United States, Indian and Southeast Asian companies will be able to raise tremendous capital and challenge China in multiple ways. The fall of China has become public knowledge now. Xi Jinping’s anti-market policies have ended up pulverising the fortunes of big Chinese companies. At China’s cost, India and other countries of the Indo-Pacific are set to achieve staggering growth in business.

In September this year, Freshworks Inc., which is a software-as-a-service (SaaS) company, became the first-of-its-kind Indian SaaS company to get listed on the US stock exchange. It raised $1.03 billion from its IPO. The company issued its share at $36 per share. It registered a growth of over 32 per cent growth on the very first day and was trading at $47.55 per share at the end of the day.

India is fast emerging as a leader in the SaaS sector. For India, the success of its IT sector has been a story to tell around the world. Now, the SaaS sector promises to outgrow the IT sector itself, and the effects of the same on the Indian economy will be tremendous. According to a report by Forbes, between 2025 and 2030, the software product companies from India will surpass the IT services sector by market value. The market value of India’s cloud software companies could touch as much as $1.8 trillion by 2030 if they grow aggressively.

India’s SaaS companies will lead the way when it comes to listings in the United States. Together, India and ASEAN countries will deliver a fatal blow to China, at a time when it is already down and seething in pain.

The mind-boggling geopolitics of sand