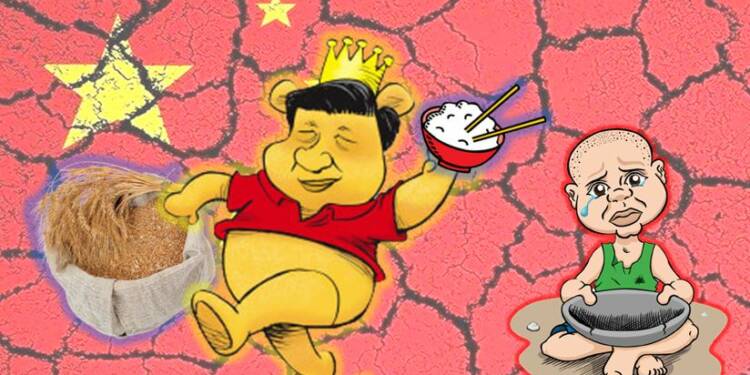 The Chinese are a hungry lot. Chinese communists remain perpetually famished. No matter how much they eat, they simply cannot seem to satiate their hunger. Part of their desire for food is fuelled by their insecurity of their country running out of grains soon. So, they want to consume as much as they can before a famine strikes China. But China’s hunger, greed and desire for food is costing the world dearly. China has stockpiled nearly half of the world’s food grain reserves, pushing millions into a famine and triggering a food crisis across the world. China’s brazen grain hoarding has resulted in food prices across the world soaring.

The Chinese Communist Party (CCP) is sitting over a food crisis whose true extent is yet to be unleashed. But it knows it is in deep trouble. You know, that moment when you are in a big mess, but can’t really tell anyone about your crisis? The CCP is experiencing the same right now. The CCP has become CGHP – Chinese Grain Hoarding Party. It is trying to resolve a crisis much bigger than itself. Unfortunately, the CCP’s attempts at saving China are having global ramifications, and the world community is not impressed.

China is engaging in some massive hoarding of food grains. Less than 20% of the world’s population has managed to stockpile more than half of the globe’s maize and other grains, and China is leading the crusade in establishing this hegemonic food disparity. According to data from the US Department of Agriculture, China is expected to have 69% of the globe’s maize reserves in the first half of crop year 2022, 60% of its rice and 51% of its wheat.

According to Qin Yuyun, head of grain reserves at China’s National Food and Strategic Reserves Administration, “Our wheat stockpiles can meet demand for one and a half years. There is no problem whatsoever about the supply of food.” He proudly proclaimed that China was maintaining its food stockpiles at a “historically high level.” According to the General Administration of Customs of China, the communist nation spent $98.1 billion importing food in 2020, which is 4.6 times higher a figure 10 years ago.

Nikkei Asia reported that between January and September 2021, China imported more food than it had since at least 2016. Over the past five years, China’s soybean, maize and wheat imports soared by twelve-fold. Imports of beef, pork, dairy and fruit jumped by five-fold.

Nobody wants to be a farmer in China. The soil is turning toxic, returns are low and crop yields hardly make agriculture a viable career option for Chinese citizens. Additionally, people from rural China are migrating to urban centers in search for better livelihoods. China’s production of wheat and other provisions as well as the amount of land used for agriculture plateaued in 2015.

Also read: China’s dams are bursting. A city of 10 million could be washed away. And a severe food crisis is almost here

Goro Takahashi, a professor emeritus at Aichi University in Japan and expert on Chinese agriculture had this to say about the health of China’s agriculture sector: “Agricultural productivity in China is low due to the dispersion of farmland and soil contamination. The amount of agricultural production will continue to stall as farmers migrate to urban areas.”

China can no longer domestically produce food to fulfil the country’s growing demands. To make matters worse, Chinese citizens now want high-quality food products, and the one thing we know about China is this — it cannot produce high-quality goods, leave alone food. Everything in China is of cheap quality. So, in order to mitigate its food crisis, China is importing large amounts of food grains, hoarding them, and pushing global prices over the roof.

Also Read: What Does FNAP Stands For? with Explanation

We at TFIglobal were the first news team from around the world to tell you that China was reeling under an intense food crisis. In November itself, we told you how the Chinese government had issued a new directive — asking citizens to store as much food as they can. The Xi Jinping administration is also looking to cut the amount of food wasted in Chinese households. Vegetable prices in China have soared, and one needs to be no less than affluent to afford vegetables in the country now.

By last month, prices of cucumbers, spinach and broccoli have more than doubled since early October. At $2.60 per kg, spinach was more expensive than some cuts of pork as per a vegetable price index in an important trading hub in Shandong. According to the data from the Ministry of Commerce, wholesale vegetable prices increased by 28% in October, and are already at their highest level since February.

Now, China is panicking. The Chinese regime has lost the plot. China’s agricultural land is turning barren, and the world might soon stop exporting food to China. What do you think will happen once China runs out of hoarded food grains and is unable to procure anymore grains? The country will turn into a mass grave.